Being the 50th Anniversary of MINI means they’re unveiling two new concept cars on the public at the 2009 Frankfurt Motor Show. Dubbed the “Oxford Twins,” the Coupe and Roadster Concept cars made an impression at the show today.

I’ll be honest with you…the press release MINI sent out today regarding these cars was 58 pages long; I’m not joking. I’m not going to read the whole thing like I do most of these releases, but I have the important stuff regarding the Coupe and Roadster… 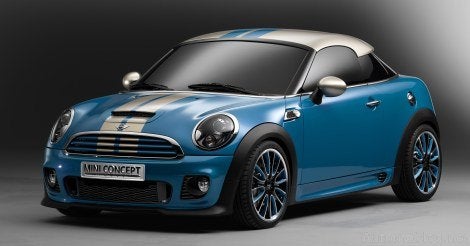 The Coupe Concept interests me the most, so I’ll write about it first. I’ve never been a big fan of MINIs. I don’t deny the cool-factor, and I understand why their owners love them so much, they’re just not for me. The Coupe Concept looks cool and gives a more sporting appearance to the car than the current model.

MINI focused on lightweight construction and removed the two rear seats, along with a sloped roofline and raked windshield for improved aerodynamics and style. The Coupe Concept sports the same 1.6-liter turbocharged engine producing 211 hp found in the Cooper. There really isn’t much to say about the Roadster Concept. It’s basically a Coupe with a chopped top. The interior is wood-trimmed instead of carbon, and it includes a pointless display that shows you how long you’ve been driving with the top down.

The press release didn’t give any release dates or prices, so stay tuned for that info as it comes out. Of course these are just concepts, so it’s possible they won’t even be produced.