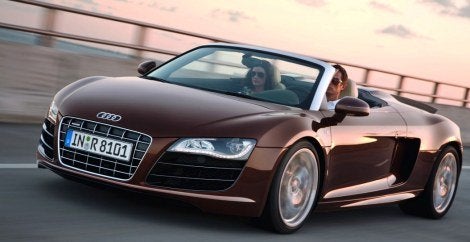 Now it’s officially official, as they say. The long rumored, we know it’s coming anyway drop top version of Audi’s R8 has finally broken cover. “Breathtakingly dynamic open-top driving,” says Audi, and I’m not going to argue. The “normal” R8 is pretty impressive, especially when you consider what they sell for; which in the super car world, is sort of a bargain.

Let’s get the bad stuff out of the way right off the top: That root beer brown color is terrible. That was a shade that barely worked in 1975, by now, it shouldn’t be anywhere near a new car, let alone the highly anticipated Audi R8 Spyder. The brief sketch goes like this: The mid-engined V10 engine cranks out 525 hp, it has a lightweight cloth top opens and closes automatically (it’s a one touch deal, no latches or anything to deal with) and several body parts are made from carbon fiber. But let’s get into the juicy details.

As I said, the V10 engine puts out 525 hp and can blast the convertible from to 100 km/h in 4.1 seconds. Top speed is 194.49 mph. The Spyder features technologies like Quattro permanent all-wheel drive and full-LED headlights.

Noticeably missing on the Spyder are the distinctive sideblades seen behind the doors on the coupe. The side panels and the cloth top storage cover are made of a carbon fiber composite. The engine cover features two arched cowls that extend to the spoiler lip and include large, integrated air vents. The R8’s soft-top weighs in at just 66.14 lb and includes a heated glass window. 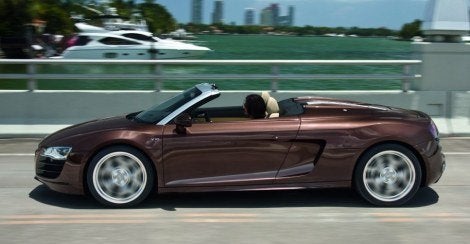 The top is actuated electrohydraulically and can opens or closes in 19 seconds, even while the R8 is moving at speeds up to 31 mph. When the top is down, it drops into a compartment over the V10 engine. There’s also a net-like wind deflector that can be latched into the bulkhead behind the seats in two easy steps.