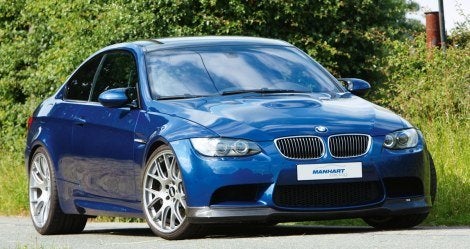 Manhart Racing, yet another German tuning firm, found that the current iteration of BMW’s M3 just wasn’t good enough, so they decided to upgrade it. OK, fair enough. That’s what tuning firms are there to do, but to the guys at Manhart Racing the concept of “enough” meant cramming a 5 liter V10 into the M3.

If German tuning firms keep going at this rate, by sometime in 2012, we’ll see the biggest AMG blown V12 crammed into a VW Polo.

Manhart calls their BMW M3 E92 5.0 V10 SMG a “Porsche Chaser”, and just reading over the press release I think that might be a bit of an understatement. The existing M3 is anything but underpowered nor is it underperforming. The M3 is, however, not really the sort of car that you could run with a Porsche 997 Turbo, even if the current M3 has a 420-HP-V8 under the hood.

So, Manhart Racing thought a way to counter the performance of the 997 Turbo was to develop a M3 with a 550 HP V10 under the hood. That’s 70 ponies more than the Porsche Turbo’s 480 HP and 20 more than the Porsche GT2, that clocks in with 530 HP. And Manhart says that the majority of the parts are OEM from BMW.

The 550 HP plant was derived from the current version of the M5 E60. The 5.0 liter V10 just barely fits into the engine compartment of the M3 Coupe. Manhart did away with 250 km/h speed limiter and updated DME-steering. The catalytic converter was updated to two 200 Zeller-HIS units and the exhaust system is titanium and features four 84 mm thick tailpipes. 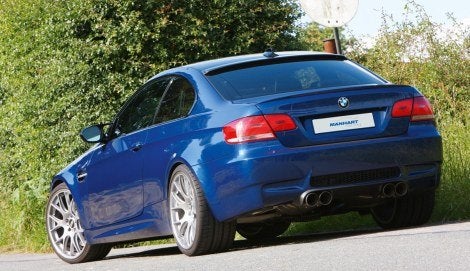 There’s limited bodywork changes along the lines of a front and rear spoiler, a diffuser, a roof spoiler, front steel flooring and an air collector. On the inside Manhart installed heated BMW performance seats a performance steering wheel equipped with illuminated rocker switches and scads of carbon fiber, Alcantara and leather. 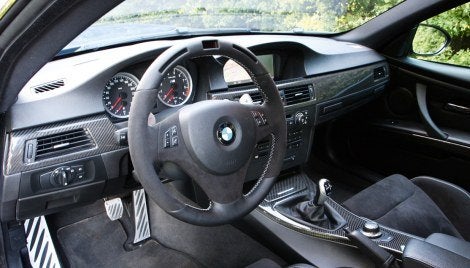