If the worse thing you can say about the whole cash for clunkers program is that the paperwork is a hassle and that there’s an apparent shortage of demolition derby cars, then I think it seems to be working pretty well. It almost seems like a joke at first, but it turns out that in the world of serious demo-derby-dom, cars age getting harder to come by.

So far, the cash for clunkers program has netted 690,000 vehicles to be taken off the streets. Sure, it’s essentially a subsidy for automakers, but it’s hard to argue with the side benefits of using way less gas and making a lot less pollution. But you can’t have something for nothing, and somebody was going to come up loosing, rather than winning. Turns out that it might just be demo derby participants, of all people.

Normally, when a car of a certain age and mileage and more or less worthless collectability gets towards the end of its useful life, it’s stripped of glass, reinforced here and there, maybe relocate the fuel tank, and then driven into another such car for the drunken amusement of derby aficionados at county fairgrounds throughout the country.

Of course, when watching a bunch of near-wrecks smash into one another for a night is what you consider “high entertainment”, you’re going to blame somebody. And guess who they blame?

“Obama is an anti-demo-derby guy. He’s targeting the cars we’ve been using,” says Tory Schutte, head of the Demolition Derby Drivers Association. What a surprise, blame the president. What’s even more surprising is that there’s actually a Demolition Derby Drivers Association. It’s that organized that the drivers have their own association? Guess so. Not only that, but it seems that there were 3,500 demolition derbies in the U.S. last year. Which is an impressive number.

Naturally, placing the blame at Obama’s feet for all this is misguided to say the least. You also have to take into consideration that scrap metal prices have risen dramatically in the past two years, so a lot of would-be demo cars ended up being fast tracked to junkyards to be cubed and melted down. 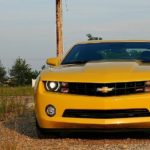