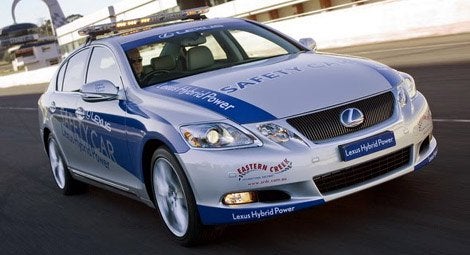 I guess you could file this under “Why didn’t someone do this sooner?” and really, why didn’t someone? Every carmaker on the planet, and most every race series, is trying to make themselves look greener. Some, like the ALMS are doing it for real. They’ve got hybrid racers and green equivalency championships and it seems to be working out really well for every one involved. Others are just trying whatever they can to keep the wolves at bay.

No, I’m not say that’s what is going on, but this IS a pretty cool idea. Why not? Why not have a hybrid running as a pace car? It presents no more technical problems than using any other car, it makes the series look better, in an environmental sense, and you know whichever car company gets tapped has got to be pleased.

In this case, the car company is Lexus, and the car being used is their GS 450h. The hybrid will make its debut in Australia as that country’s first ever hybrid pace car at the Muscle Car Masters race. And if that isn’t irony, I don’t know what is. The race is held every year at Sydney’s Eastern Creek Raceway, and the Aussies say this isn’t a one off, the luxury hybrid will be a permanent fixture as the track’s official safety car.

Lexus Australia Chief Executive, John Roca was very positive about the whole deal, saying, “Our partnership with Eastern Creek is a great way to showcase Lexus’ hybrid range of vehicles and demonstrate its compromise free mix of economy and power.” And that all sounds true enough, and not much corporate spin seemed to be involved.

Lexus says that apart from the special paint job and the blinky safety car lights, the GS 450h is completely stock and has no other mods over the road-going model. Not that it would need it. In most series, the pace car only has to be able to hold around 80 MPH for the full lap, and the GS 450h should be able to do that.

Seems like a win-win all the way around … so when will we see this here in the U.S.? 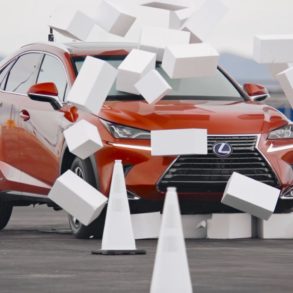