In this automotive day and age, there is an overabundance of sporty coupes to entice any driver’s appetite. Is a requirement to have something fun, but budget-conscience? Consider the Mazda RX-8 or the Hyundai Genesis. Need something a bit more extreme? Try a Chevrolet Corvette. If luxury is an important part of the equation, BMW and Infiniti can help with their gorgeous 1-series and G37 coupes.

So where does Audi’s TT coupe fit into this mold? Where does it fall on the sporty spectrum? Does it even deserve to be called “sporty”? That’s going to be a tough question to answer. 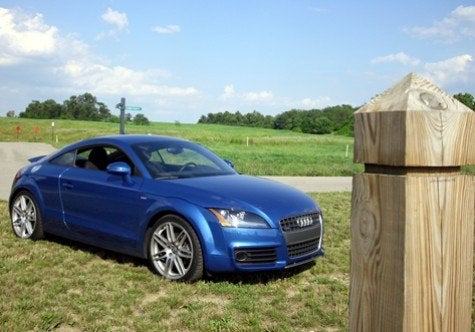 The Audi TT was a smash hit when it arrived from Europe eleven years ago. It offered the best interior with promises of high-performance fun. It delivered on the former, but not the latter, with its short wheelbase delivering a harsh ride, numb steering and dangerous high-speed stability issues. This second generation, which made its debut in 2006, promises to fix the complaints while making it much more fun to drive.

When this Aruba Blue TT S-Line arrived at my door, my mouth instantly began salivating. The redesign takes the already good-looking first-gen Audi and gives the two-door a more mature and opulent appearance.

The TT sits lower to the ground and overall length has been expanded by 5.4 inches overall, with an extra 1.6 inches in the wheelbase. It’s a noticeable increase too, with the car looking more balanced and polished without being reminded of a clown car. 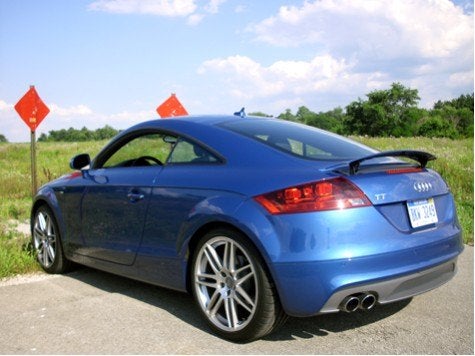 The sheetmetal is also new. The car incorporates the Audi double-grill, smaller yet angular HID headlamps, and a more chiseled front bumper. Down the side, the TT keeps the subtle fender flares and body-length character line from the older car, but adds a nice body crease down towards the bottom. The rear end flows much more gracefully from the roof down into the rear bumper. It even houses an electronically-raised spoiler.

The new TT is a very handsome car, but comes of as a bit sedate compared to the new Audi A4 and the arousing Audi S5. With the optional S-Line package, which includes an aggressive front bumper and sexy 19-inch wheels wrapped in high-performance shoes, the excitement is amped up. However, just looking at a lesser model face-to-face, it looks almost too soft for some. 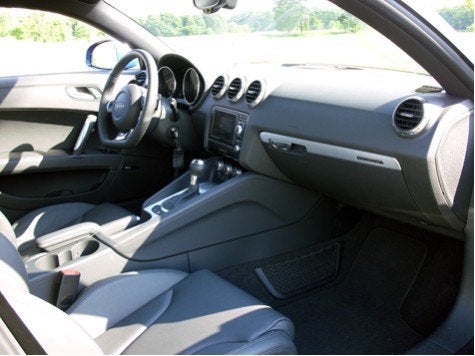 Inside, it is all Audi. Premium materials are found throughout the inside of the TT, from the excellent and tight-fitting dash panels to the S-line’s sumptuous black Napa leather used for the terrific sport seats, center console and door skins. There is so much detail inside this car. I love the square-bottomed, thick-rimmed steering wheel, the stylish touches to the air vents and rotary controls for the ventilation were great, and the two big dials informing me of my speed and engines revs were right in my eye line.

Occupants sit feel like they are sitting low in the car do to the high door line and small windshield, but it is by no means claustrophobic inside. While headroom is a bit tight, there is plenty of room up front for any size person. With the driver-centric dashboard, most controls fall to hand, which is vital in a car which emphasizes control. Just do not expect anyone other than a small child to enjoy being in the upright rear seats for more than five minutes. Thankfully the seatbacks fold down to expand the already impressive 13.1 cu. feet. 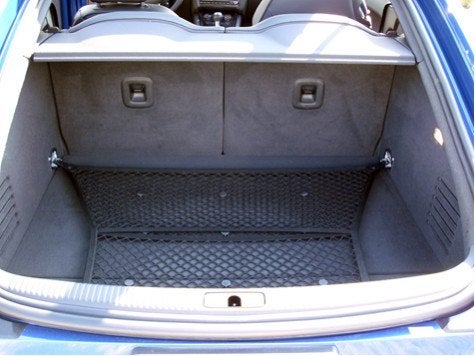 There are plenty of toys as well in this fully-loaded S-line for today’s techno-wizards. From Audi’s Multimedia In system controlling everything from the navigation to Bluetooth wireless phone and 13-speaker Bose audio system with Sirius Satellite Radio, it is the mobile command center. My favorites, though, had nothing to do with the MMI. They were Audi’s Magnetic Ride suspension and the electronically-controlled rear spoiler.

In normal mode, the TT is a capable daily driver. The ride is a bit on the firm side, but does a good job of absorbing all major bumps with little fanfare. Power delivery is very good coming from a 2.0-liter, directed-injection and turbocharged four cylinder. Sending 200 horses through Audi’s quattro all-wheel-drive leaves no screeching of tires. Just a good old fashion surge of passing power once the turbo spools, and it will pull hard all the way to 6,000 rpms before it gives up and waits for the transmission to shift. 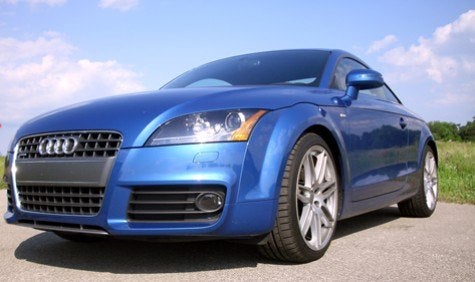 Speaking of transmissions, the TT comes with the company’s quick-shifting S-tronic six-speed dual-clutch automanual transmission. Leave it in D and shifts will come absurdly quick. Shift into Sport to allow the car to hold gear in the corners or place it in Manual mode for quick tugs on the steering wheel mounted paddles. Either choice will certainly be satisfactory, unless you are in slow-moving traffic in D, in which case being too aggressive with the throttle will confuse the transmission and make the ride jerky enough to have flashbacks of learning to drive a real manual transmission.

Handling is another misnomer as well. As in the S5 tested last month, with the press of the button, this little Audi goes from a cruiser to a crusher. The suspension immediately firms up and the steering becomes sharper. You will notice a difference in both roll (what little occurred in normal mode is non-existent) and steering is almost go-kart quick. 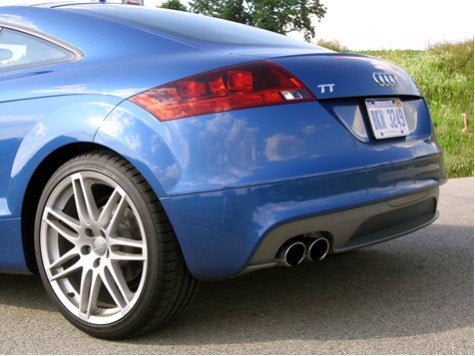 The TT displays a level of grip that Elmer’s Glue is envious of. Drive the car hard into a corner and the combination of sticky tires and the quattro system will not falter. In a tight right-hander, pick a line, floor the gas in second and revel in the super stiff chassis, the McPherson strut front and four-link independent rear suspension, and proven all-wheel-drive system working in harmony to keep the car and its driver firmly planted on the road. Even with the nose heavy 60/40 weight balance doesn’t hold the car back.

While the grip is aplenty and the engine is torquey, there is no real link between the car and the driver. While the enhanced steering and suspension changes were appreciated and noticeably helpful, there was a disconcerting disconnect between everything, almost as if the car is part of a great computer game. It may be a joyous experience, but the game is being played in someone’s living room and not on the road. The spoiler, while fun to entertain fellow drivers at redlights, didn’t really make a difference in handling. Maybe I just wasn’t going fast enough.

The Audi TT is an enjoyable car. It looks good, the build quality is excellent, and it is a good tourer. But a sports coupe? Not really.