Ilmor engineering, some of the best engine guys on the planet (good enough for roger Penske at least) have just shown off their new five-stroke engine that will … wait, what? Five? Hold on a second … suck … squish … bang … blow – nope that’s only four. Engines have four strokes, right? Yeah, bike engines are two, but I count only four … I thought these Ilmor guys were supposed to be smart. Wait, you mean this really IS a five-stroke engine? How the hell does THAT work?

First, let’s get you up to speed on who Ilmor is. They’re the guys that spun off from Cosworth years ago, and ended up working almost exclusively for Roger Penske. They are the guys that did all of the legwork for what was re-badged as the Chevy Indy car engine. So they’re top notch.

Their new engine, which is described as a ” test engine” that can crank out power and efficiency figures like a diesel, but runs on regular gas and puts out lowering emissions at the same time. Just 700cc in size, the little beast cranks out 130 horsepower and 122 lb-ft of torque. The Ilmor boffins say this is all a benefit of the engine’s fifth stroke.

Here’s the nuts & bolts on that extra stroke. Two of the engine’s cylinders run like a normal four-stroke design. The exhaust gases get released into a third low-pressure expansion cylinder. A fifth stroke then allows the exhaust gases to expand, which boost thermodynamic efficiency, and it’s all uphill from there. Ilmor figures there’s a five-percent improvement in overall efficiency against a conventional direct injected engine of similar size.

“We’re looking for a manufacturer to back the idea, and the interest centers on its use in a hybrid application, as they tend to need sudden bursts of energy, and that is what this engine does well,” says Ilmor engineering manager Steve O’Connor says,

Future plans are for a second gen of the technology putting out 150 horsepower and weighing in at 20-percent less than current engines. Ilmor Engineering spent almost 20 years developing the three-cylinder engine. The prototype of the engine was first shown at the 2009 Stuttgart Engine Expo, and Ilmor is now looking to do real-world, under-the-hood testing. 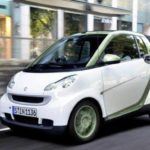