GeigerCars, however, is a German tuning company that modifies mostly American cars. Once they’re out of the Geiger showroom, there is an obvious German touch to the project. The 2010 Geiger Chevy Camaro SS Compressor is no different. The tuners took a new Camaro SS and added their own touch…what have they come up with? 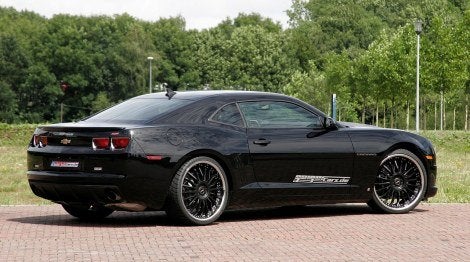 The 2010 Camaro SS can produce a healthy 432 hp – but that’s not enough. Geiger added a supercharger and exhaust system to the car, which allows it to produce a head-snapping 568 hp. A twin plate sport clutch helps the six-speed manual transmission handle the extra power, which propels the car up to a top speed of 195 mph.

Geiger has also fitted the Camaro with a new suspension system consisting of coilovers, adjustable anti-roll bars in the front and rear, as well as an upgraded braking system. New wheels round out the package, which you can instantly tell is German-inspired.