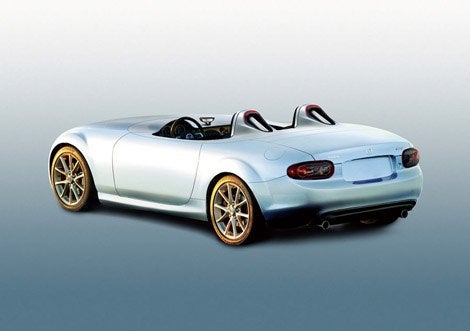 Every so often, Mazda makes a more sporting concept vehicle of its much beloved MX-5/Miata. It looks like this years Frankfurt Auto Show will see the debut of yet another one of these highly interesting little sportscars that will make me wonder if Mazda will finally let something like this out on the streets.

For a time now in Miata circles, people have been asking Mazda to make something really cut down and light weight. The Miata is pretty damn featherweight as it is. The current model, the heaviest Mazda has ever made still comes in at around 2400 pounds or so. But even back when the NA was only 3 or 4 years on the market and tipping the scales at 2090 pounds, a lot of people were asking for a factory stripper.

So what will the company form Hiroshima be tempting us with this time around?

They say it will be an “ultra sports-oriented concept, low-feature” type of the MX-5 Miata. Called the MX-5 Superlight, the car looks back to the days of no roof at all sportscars that “made more sense on a track than as a daily driver.” Yeah, for them maybe, but I’m different that way.

Mazda is being coy with the details at the moment, but they did say that the MX-5 Superlight will be greener than the showroom models via extensive weight-reducing efforts throughout the vehicle. Mazda noted that both CO2 emissions and fuel consumption are down.

Curiously, the concept car was styled at the automaker\’s studio in Frankfurt, Germany, and sadly it\’s intended to be a pure show car, not a production model, according to Mazda.

But what the hell do they know?

Mazda should build it. Or if not a direct copy of what will be on the show stand in Frankfurt, then something else.

They should take the current, base model MX-5 and strip everything out that doesn’t make the car go faster or help it meet road regs. Get a couple of Mazdaspeed racing seats and drop those in. Make the passenger’s a quick detach unit so it can be pulled form the car in a matter of seconds. All sound deadening: Gone. All carpet: Gone. Radio/CD/etc. and the antenna: All gone. Trunk: Stripped of everything but the spare, the jack and a nice factory tool kit that fits in one of the recesses. A/C: Gone. Center Console: Gone. Windshield wipers: One on the driver’s side only. Top: Gone (this is one time when its a bad thing they went with that retractable hardtop, because having a removable hardtop would be a nice option, but none of those are left). Heater: Optional. All power accessories: Gone. Door locks: Gone.

Make them in only two colors, red or white, and the hood and trunk lid should either be made of aluminum (like the original hood was) or carbon fiber. If they can go with C/F cheap enough, then leave it black.

Now go to the parts bin and add all of the applicable racing bits, both from the R-Package list and from the Mazdaspeed track support program, and you’re done.