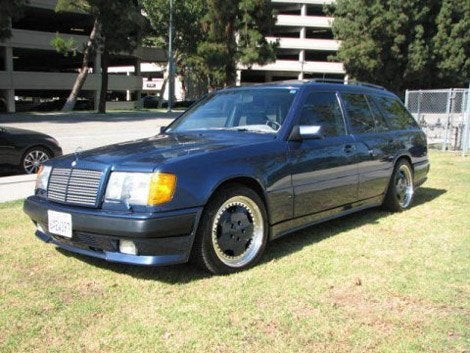 Not that I’m in the habit of selling used cars via this site, but you’ve got to check this out. There’s a really fun site out there called Bring A Trailer. They seem to be serious, old-school sportscar guys with a fetish for old track cars, Alfas and obscure British marques.

Recently they have an add for a Mercedes station wagon that gets the full on AMG Hammer treatment. Clearly, I’m not the sort that is likely to sing the praises of a station wagon (shudder), but when there’s a wagon out there that puts this much power to the ground, and it’s going for not all that much money (hopefully), I’m will to expand my horizons a little.

The AMG Hammer was a very, very serious sedan when it came out of nowhere in the mid-80s. It was a four-seater that had a top speed rivaling Ferraris and Lamborghinis and the build quality of a bank vault. It would seem that they made some wagon variants of the original Hammer, and here’s one of them.

It’s a 1987 Mercedes Benz AMG Hammer wagon that came to North America via Canada as a Canadian model. It’s now registered in California, which means it should probably be able to be registered anywhere (getting tabs for a car in Cali can me a major PITA). 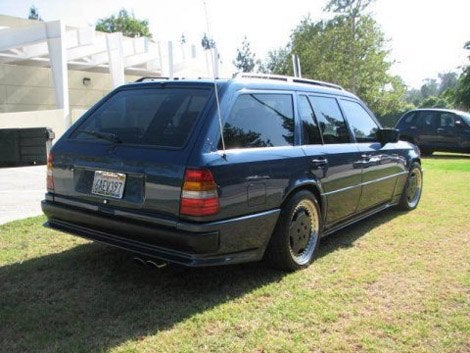 When new, said AMG Hammer wagon stickered for a pretty damn staggering $160,000, which is WAY More than a Ferrari went for back then. When this wagon hit eBay, the opening bids were starting out in the $20K range. A deal, especially when you considered that the car has covered only 44,000 km since new. Also, the Hartmut Feyhl, the original AMG-U.S. man, has been personally involved with this car, so you know this isn’t some hashed together clone type thing.

Like the Hammer sedan, the Hammer wagon is based on the W124 wagon, and features the AMG ground effects, color-matched 3-piece 17 wheels, and an 80s-style monochrome paint scheme in metallic blue. Plus, the Canadian derivation means more Euro design details than you’d normally see. Under the hood is where all the real cool bits are though. There sits a 5953cc 32-valve V8 producing a hefty 375 hp and a ground warping 407 lb-ft of torque. The cylinder heads were worked and built by AMG, to bring the best out of the M117 motor. Contemporary tests of the Hammer wagon showed that it could do 0-60 in the 4.6 to 5 second range. Do I need to mention this is for a frickin’ WAGON! Also, there’s no top speed limiters or traction controllers that are on modern AMG products, so you can throw that into the “fun” category. And it’s rare too. Definite production numbers for AMG Hammer Wagons are not easy to come by, and the guys at BaT speculate that there were less than a hundred made.

A wagon, yes a wagon, worth considering.