Chevrolet Volt: What We Know About the 230 MPG Hybrid

Dear God, is GM serious? 230 MPG for the upcoming Volt in city mileage? Yes, I know, figuring out the miles per “gallon” for a hybrid, especially in the hotly debated “city cycle” portion of its operating realm is tricky.

And it’s even trickier for the Volt, due to the drivetrain layout, but … shoot, even if GM is half right about this, the equivalent of 115 around town will be impressive enough … but 230? Talk about throwing down the gauntlet.

And two things leap out at me.

One: ” … based on development testing using a draft EPA federal fuel economy methodology … ”

Let’s take those in order. In the first place, that’s the new, and much talked about EPA measurements for fuel efficiency for hybrids. So that MIGHT explain why the number seems so high. For example, I would like to see how a Toyota Prius rates under the same scheme.

I’m not saying that GM is playing fast and loose here, or cooking the books, just that if you compare 230 MPG to a Prius’s 45 or 50 around town, most people will think that the Volt has been worked over by Doc Brown and his Flux Capacitor. It’s that second one that really gets me though: ” … at LEAST 230 miles per gallon … “, so that means the Volt might turn in MORE than 230 MPG? I’d love to see that … maybe it’s because of the way the Volt is laid out, drivetrain-wise, it’s possibly to run it on nothing but batteries with little to no ICE as gen-set while tooling around town.

I don’t know, but if you can replicate 230+MPG in the real world, that’s going to shut a lot of people up.

Of course, it will just get me thinking.

Thinking about things like stuffing that drivetrain in something like a now-defunct Pontiac Solstice. And then tuning that drive train more to the performance end of things. Like, say, what if GM were to cram that into a small, two-seater and dial it back to getting “only” 160 MPG around town yet blast said sportscar to the end of a dragstrip in the low 10s?

Charged-up for the Chevrolet Volt

Anxiously awaited for almost 2 years, the plug-in hybrid Chevrolet Volt is viewed as the most technologically-extreme vehicle an American automaker has crafted. A four-door compact sedan, the Volt displays a unique powertrain allowing an electric motor to drive the car for the first 40 miles before a gasoline engine takes over.

Producing the equivalent of 230 miles per gallon city through EPA tests, the only major problem with the Chevrolet Volt is how the revolutionary plug-in hybrid is taking its sweet time in becoming available to the public.

As pre-production examples of the sedan has been rolling across North America, the individuals behind the wheel were limited largely to press members and company dignitaries. With the production of the Chevrolet Volt planned for the end of 2010, the general automotive driving public is left electrified by the fuel-saving capabilities since the concept was shown in 2007.

Making for what is possibly one of the longest publicity teases for a new American car, some Volt seekers are becoming antsy about the continuing wait. With one unofficial website (gm-volt.com) recording 50,000 people expressing interest in the Chevrolet Volt, automotive crowds could be in danger of losing charge for the new car. In fact, after the public relations nightmare the Detroit 3 automakers created when they each took private jets in soliciting the U.S. federal government for financial aid, GM then-president Rick Wagoner used the Volt to spin the company’s overall publicity driving it into Washington D.C. for the following meeting.

Still promoting the Volt through testing across the United States, including intense driving through an Arizona proving grounds, one thing that appears apparent is that General Motors vehicle preparation for late this year is quite extensive. Considering the stakes and GM’s past track record in pioneering technology (cylinder deactivation in the 1980s and night-vision in the 2000s being among the examples), we will have to forgive the seemingly long wait.

With production tooling at the Detroit-Hamtramck assembly plant installed, project engineers are currently hardening the Volt’s assembly and reliability. The 2011 Chevrolet Volt’s dependence on electronics has led special attention be paid to software and technology aspects of the plug-in hybrid sedan.

If the wait for some this vehicle is beginning to weigh too heavily for anxious drivers, there might be a way to indulge in a virtual test drive of a Chevrolet Volt this fall. The Xbox 360 and General Motors has just announced partnering a driving simulation with the new controller-free Kinect device. Within the Kinect Joy Ride, the Kinect device will interpret body motion to grant the feeling of driving the super-efficient vehicle.

Even though the Kinect device will not be available until shortly before the release of the real Chevy Volt, the virtual version of the hot electric/gasoline car might still provide the first real opportunity for us to drive the Volt. 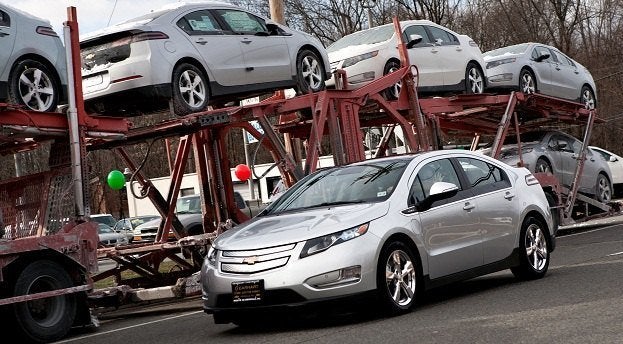 Through the past two years, General Motors and Chevrolet has done everything possible to get motorists charged up on the idea of the plug-in hybrid Volt. Weathering the company’s bankruptcy with the promise that the Chevrolet Volt would employ a new way Detroit would build automobiles. Following an extensive evaluation period, the Chevrolet Volt has finally met their first owners.

Continuing on the highly-publicized life of the Chevrolet Volt, the announced first owner of the extended range vehicle is a retired airline pilot Jeffrey Kaffee. Taking delivery of his car in the presence of a photo-op, Kaffee was said to have traded in his Toyota Prius for the Chevrolet hybrid. Though Jeffrey Kaffee was the first owner to take possession of his 2011 Chevrolet Volt, the first publicly sold example of this car was actually bought by NASCAR team owner and automotive dealership network magnate Rick Hendrick. Acquiring the initial Volt in a charity auction for $225,000 as a benefit to the Detroit Public Schools Foundation, Hendrick also has the privilege of owning the first Chevrolet Camaro as well as the first Corvette ZR-1 through a similar acquisition.

As the keys of first Chevrolet Volts are finally being handed off, the pioneering plug-in hybrid vehicle will now see itself either rising or falling to its own magnificence. Like the early days of the Toyota Prius, General Motors has already reported that the Volt is being built at a financial loss. This is indeed a concern when a vehicle smaller than a Chevy Cruze sporting a sticker price over $40,000.

Some critics are outraged as GM (a group some people still believe it’s creatively cheeky calling the business “Government Motors”) is choosing to produce such a far-reaching concept rather than focusing on solely ‘bread and butter’ vehicle. Citing the fact they are building for what is believed to be the future American roads, some might argue that a choice to turn a back to the technology promoted in the Volt could bring doom to the American auto industry. As we know already, Toyota’s persistence has paid off with a profitable hybrid propulsion system and the respect as the leader in the industry. 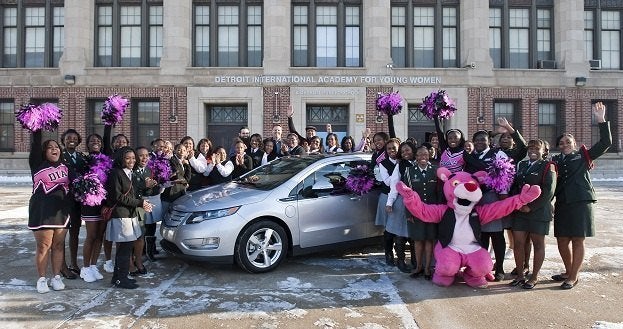 Complaints have also been leveled against the fuel efficiency and the actual personal economic benefits of the Chevrolet Volt. As the Volt received multiple accolades which included the Motor Trend Car of the Year for 2010, some have voiced their own opinions strongly against the car as some ‘tree-hugger’ dream machine. Personally, if there is a car to cater the such specific tastes, I welcome the newest group of automotive fans.

It seems amusing that General Motors always seems to have an universal legion of critics. Today, it is a forward-thinking gasoline/electric hybrid, a matter of a few years ago it was a popular four-wheel drive vehicle. Back when the Chevrolet Volt was regarded as a mere pipe dream, another General Motors product earned the distaste of organized North American groups. The Hummer H2 was angrily criticized for being an arrogantly large sport utility with a claim for burning the most gasoline of any vehicle sold to the public.

As the price of fuel skyrocketed, the allure of the Hummer brand dissipated as the car market drastically changed. Based on a variation of the GMT-800 chassis, the vehicle was once part of the best-selling platform in North America. Able to build the Hummer H2 at a much lower cost than the premium price tag, the Hummer H2 was a highly profitable product when their car sales were flattering.

Just as it is considered offensive for some to shame others for the automobile they drive, skeptism of modern powertrains could make some look as misguided as the critics against personal computers in the 1970s. Of course, with the passage of this information, the population in general reacted on their own accord to embrace new technology.

Now that the Chevrolet Volt enters the market providing primary electric propulsion with a gasoline engine back-up, we’ll soon see if an advent of another new age is upon this continent.