Kia’s motto, “The Power to Surprise” has been all fluff up until recently. With the Kia Soul released this year and now the Forte, I’m looking forward to whatever else this car maker has up their Korean sleeves.

The just-released Kia Forte replaced the yawn-inducing Spectra as their compact sedan, and stands up to some very big players in this segment – the Honda Civic, Nissan Sentra, Toyota Corolla, and Ford Focus are all direct competitors.

So now that Kia is finally getting their act together, will the Forte stand a chance against these superstar compacts?

It’s really hard to compete with cars like the Civic and Corolla, but Kia is doing exactly that with the 2010 Forte. Pictures don’t do it justice, but it’s actually a very attractive car, penned by a former Audi designer. A bit of everything thrown in – some Civic, some Sentra, some Corolla, and even some Volvo styling cues help the Forte achieve a conservatively aggressive appearance while still standing out on its own.

Interior design is great. While not particularly engaging, the dash and controls are extremely well laid-out and easy to use, as are the steering wheel mounted controls. As in all Kias and Hyundais, it comes standard with the excellent aux/USB/iPod jack with iPod integration.

Driving the Kia Forte is typical of small-medium sized cars. Plenty of room up front, a little bit cramped in the back. The trunk on this thing is huge, which is surprising the first time you see it. The driver info display, which shows overall and trip odometer should also include fuel economy.

In a car that people will buy partially because it gets 27 city / 36 hwy mpg (which by the way is highest in its class,) should display the real-time and average economy. In the Forte’s defense, it did include the “EcoMinder” system (standard on all automatics,) which lights up a little “Eco” indicator when you’re getting maximum efficiency. It’s a nice reminder for you to keep light feet while driving if fuel economy is a concern.

Steering in our model came from the optional motor-driven power steering system, which took a little bit of getting used to. Low speeds feels completely normal and light, but once you started to get up to speed, the steering tightens up noticeably, which Kia says will help increase fuel efficiency 2-3% I like it. 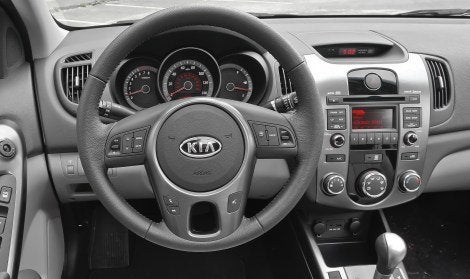 I wish the 5-speed was standard in all trims; I don’t think there’s a place for 4-speed autos anymore. If you step into the sporty SX model, you get a 173 hp 2.4-liter engine with a 6-speed manual or 5-speed automatic. Both engines are appropriately powered for this segment.

The 2010 Kia Forte is good enough to compete with other cars in this segment like the Nissan Sentra, Toyota Corolla, and Honda Civic. It gets more power, better fuel economy, and more space than you’ll get in many of the other cars, with no sacrifices.

A $13,695 starting price ensures even the lowest budgets can get inside a good new car, and the top of the line SX model doesn’t disappoint those who are looking for more fun. A 10-year, 100,000 mile warranty is also second to none. Kia’s got a real winner on their hands with the 2010 Forte.

Update – We Get Another Forte

Last year, Kia sent me the new (at the time) Forte sedan to review, and I was impressed with its ability to compete with the big players in this market, namely the Honda Civic, Mazda3, Nissan Sentra, and Toyota Corolla. Still in the 2010 model year, Kia sent another Forte my way, similarly trimmed and optioned.

So instead of writing another separate review for the same car, I’ll update this review with our findings on a second go-round.

The EX also has an optional Fuel Economy Package, which adds another gear to the automatic transmission, a “smart alternator,” Motor-Driven Power Steering, and low rolling-resistance tires to increase fuel economy around 2 to 3%. The trim level of interest (for me at least) is the SX.

The Forte Kia sent is the EX with $1000 leather package adding heated leather front seats, and leather-wrapped steering wheel and shift knob. The leather package requires the addition of the $900 Premium package, adding a power sunroof and 16-inch alloy wheels.

The 2010 Kia Forte is a surprising car, overall. It looks great inside and out, gets great fuel economy (25/34 for the EX,) and feels like a quality car. We did notice that the doors sound a bit “tinny” when closing, which made a couple of passengers question the Forte’s quality.

No matter the trim level, Kia includes two 12V power outlets and an aux/USB input up front, which is great for gadgets and MP3 players. Kia (and Hyundai’s) audio setup across their lineup needs to be emulated by other car makers.

Room inside the Forte sedan is typical – adequate but a bit tight in the rear for grown adults. Trunk space is surprisingly huge for a small car.

Since our model is an EX trim and doesn’t include the fuel economy package, it’s equipped with a 4-speed automatic transmission, and I can’t say I love it. It’s OK, sort of, but I really wish Kia would just drop the 4-speed altogether.

Before You Buy (again)

I could go on about the Forte and how well it competes in this segment, but all you need to know is if you’re looking for a compact sedan like the Mazda3, Civic, Ford Focus, Corolla, or Sentra, you’d be doing yourself a disservice if you didn’t check out the 2010 Kia Forte.

I’m excited to see the changes for next year, and even more excited to check out the Forte Koup, which is more my style.