Did you see this coming? I totally saw this coming. Chevy just announced that they will be offering a special edition version of the 2010 Camaro based off of Bumblebee from the excellent Transformers movie series.

GM sponsored the hell out of this movie, and all the Autobots (the good guys) are GM products. The yellow with black stripes 2010 Camaro is the star of the movie, and really gathered some positive attention. It only makes sense to make a Transformers-themed Camaro.

Chevy had tons of potential customers asking for the “Bumblebee Camaro,” so I don’t see sales being too bad for the special edition. Whether or not fans of Transformers are the right demographic for the muscle car is yet to be seen, but the cool factor here is through the roof. The 2010 Chevy Camaro is a great car all-around, and really shows that GM is trying again. The Transformers Edition Camaro is an add-on package to the LT or SS models and comes with the signature Rally Yellow Paint with black stripes, Autobot shields on the driver and passenger side panels, all four wheel’s center caps, and the interior center console, and “Transformers” logos on both door sill plates and the rally stripes.

The package costs $995 over the price of the car, which is a little steep for a few logos, but overall not a bad deal. You can also add the RS Appearance Package for an even more aggressive look.

Very cool idea, and I’m sure there’s more than a few Camaro buyers out there who want to be driving around in Bumblebee. 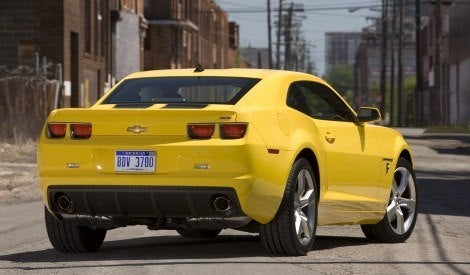