To this journalist, Lexus vehicles have always been parallel to the sophisticated, but quiet guy standing in the corner at a party. You know him well: The good-looking guy who dresses well and has the capacity to hold a conversation when you nudge him into one. However, he is very reticent and will respond, but don’t expect him to be very chatty.

This is very true with the Lexus GS460.

The GS midsize sedan debuted in 1993 and was a popular alternative to the BMW 5-series, Mercedes-Benz E-Class, and the Audi 100 four-doors. It has always done well in the marketplace, with is comfortable road manners and impeccable quality, but never really overtook its more sporting German competitors. Even it’s newer hometown rival, the Infiniti M45, can compete better with the European offerings.

For this third-generation GS, released in early 2005, Lexus has infused a bit more style and road-going prowess into its usually reserved self. But is it enough to finally beat the big three from Bundesrepublik Deutschland? If it is, has Lexus messed too much with their formula and turned their shy guy into John Belushi from “Animal House”? Read on to find out. 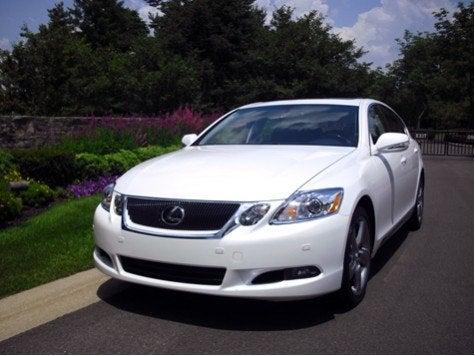 Lexuses have always been ultra-smooth, super-comfortable modes of transportation. With this GS460, is fits the mold to a “T”. The double-wishbones front, multi-link rear suspension with Lexus’s optional Adaptive Variable Suspension makes for a firm, yet velvety ride. On the majority of road surfaces, the car soaks up potholes and expansion joints with ease, and does so in library-like silence.

The quiet momentum comes from Lexus’s brilliant 4.6 liter V8 and eight-speed automatic transmission. Mating two four cylinder, four-valve engines together produces 342 horsepower and 339 lb. ft of torque. Mashing the gas anywhere in the rev range will produce a fury of acceleration and a muted purr coming from the dual exhaust. Zero to sixty in the GS460 take 5.4 seconds, according to Lexus, and I can vouch for it.

I am not completely sold on the idea of having eight forward gears, however. Lexus says all those gears help with fuel economy, but I didn’t see it as the in-car computer didn’t get above 24 mpg while driving. Furthermore, the fact the transmission has to downshift four or even five gears for quick maneuvering makes for a slow process. Luckily those shifts are buttery smooth and there is the ability to choose your own gear via the sequential-shifter. If and when the drive becomes more sporting, the GS comes with a plethora of system with the intention of helping the sedan become more stable and fun to drive. With systems such as the AVS, Active Power Stabilizer Suspension System, Variable Gear-Ratio Steering, and an upgraded braking system, this Lexus becomes a backroad eater. Again, these are optional extras which I suggest you pony up for.

With the flip of two switches located under the center armrest, the suspension instantly firms up, the steering quickens its reflexes, and the throttle response becomes more sensitive to your inputs. There is certainly a change which can be felt. Steering is now perfectly weighted and feels natural in its movements without the more common feeling of being overboosted. Underneath, the shocks and stabilizer bars stiffen, giving the car a more planted and balanced feel. 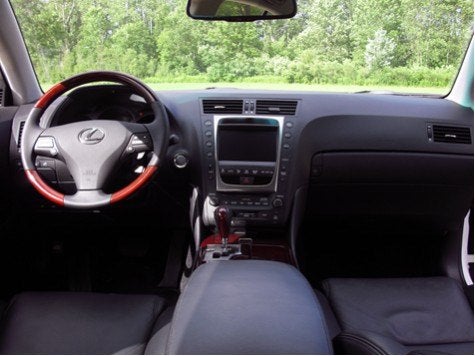 Inside is where this car really shines. All the materials used inside are top-notch and a pleasure to touch. The entire dash is wrapped in this soft, spongy material that feels terrific, the Red Walnut wood looks like they just took it off the tree yesterday, and everything has a solid, tactile feel to it. Even the leather seats are soft and all-day comfortable.

There is a copious amount of room inside, both front and back. Even though it falls behind measurements from the BMW and Mercedes, the GS’s overall interior volume beats them both by a whopping 10 cubic feet. Rear passengers benefit the most, with Towncar-like legroom and space for two in nicely sculpted seats. Behind a three-spoke, multi-function steering wheel are these brushed stainless-steel gauges which look like they came straight from Breitling and automatically adjust to reduce glare. They are quite legible, and with the information computer at the bottom of the center speedometer, quite informative too.

In between the front passenger seats is the optional voice-activated navigation system. This touchscreen unit houses all navigation, audio and ventilation controls, which are easily accessed with their clearly-labeled own button flanking each side of the screen. Input commands to change the temperature or radio are a breeze, and the screen itself is large enough for even the worst eyesight to see it. Don\’t forget to turn up the 14-speaker Mark Levinson and enjoy is crisp, clear sounds and 334 watts of deep bass. 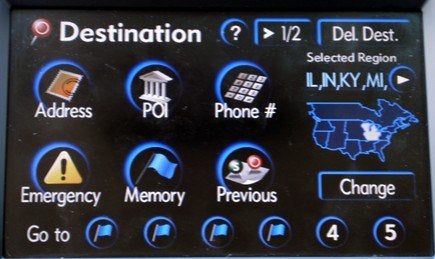 As with any premium luxury vehicle, there are more toys than just a navigation system. Standard on the 460 are heated and cooled seats, MP3 input connection, power tilt-and telescoping-wheel, SmartAccess keyless entry and push-button ignition, Bluetooth, HID headlamps which self-level and swivel, and dual-zone climate control to name a few.

In this example, the list of options includes the navigation, audio and enhanced suspension, as well as radar-guided cruise control, rear sunshade and Park Assist, and Lexus Link, the company’s version of OnStar. All these options do not come cheap and added over $10,000 to the sticker price. Ouch.

There are a number of safety features as well, with airbags all around, stability control, brake force distribution, and the optional Pre-Collision System, which uses the radar-guided cruise to sense if there is an impending accident. If the car reads a crash is going to occur, the car will tighten the seatbelts as well as use the Brake Assist system to be used instantly the driver hits the brakes.

Stepping away from the car and glancing over your shoulder will reveal a large-bodied car which is also good-looking. The GS has large rectangular headlamps stretched back into the front fenders. A chrome grill with a large L sits in between a pair of driving lights. The side has a deep crease along the beltline and a subtle piece of chrome running along the bottom. The rear bumper bulges out a bit underneath two very red taillights and is accented by two chrome exhaust tips. Overall, it’s restrained, but attractive. The Starfire pearlescent paint and optional 18-inch anthracite wheels really add to the look though.

The problem is, while all these systems, power and looks help make the car more aggressively-tuned car, there is just no real connection to be made with this car.

For the week I had it, I felt very comfortable, very relaxed and very safe behind the wheel. But that was it. I never felt the urge to push the car hard, to really reach maximum velocity. I never felt connected to the car like I do in others.

On my 50-mile handling route, I never felt the car wasn’t capable of handling the varying road, but at the same time, it never engrossed me in a dialog, never saying, “I’m having fun, give me more”. It glided around corners with out much fuss or communication. I felt more like a passenger than a driver. Also, you can tell this car is getting long in the tooth. For one, hitting a major pothole send the entire body into a jello-like wobble, revealing the strength of this car is lacking. Additionally, while I liked the simple, user-friendly layout of the dashboard, it was easy to tell the system is also a bit behind the times, as it looks somewhat dated compared to other interiors. Honesty, who uses a tape player anymore?

Despite its performance shortcomings, the GS460 has a lot to offer. It is still very well made, has the technology luxury buyers are looking for, and drives very well at 70 percent. It may be in need of a redo, but for those looking for a comfortable car with a quality interior, this Lexus will fill the bill nicely. 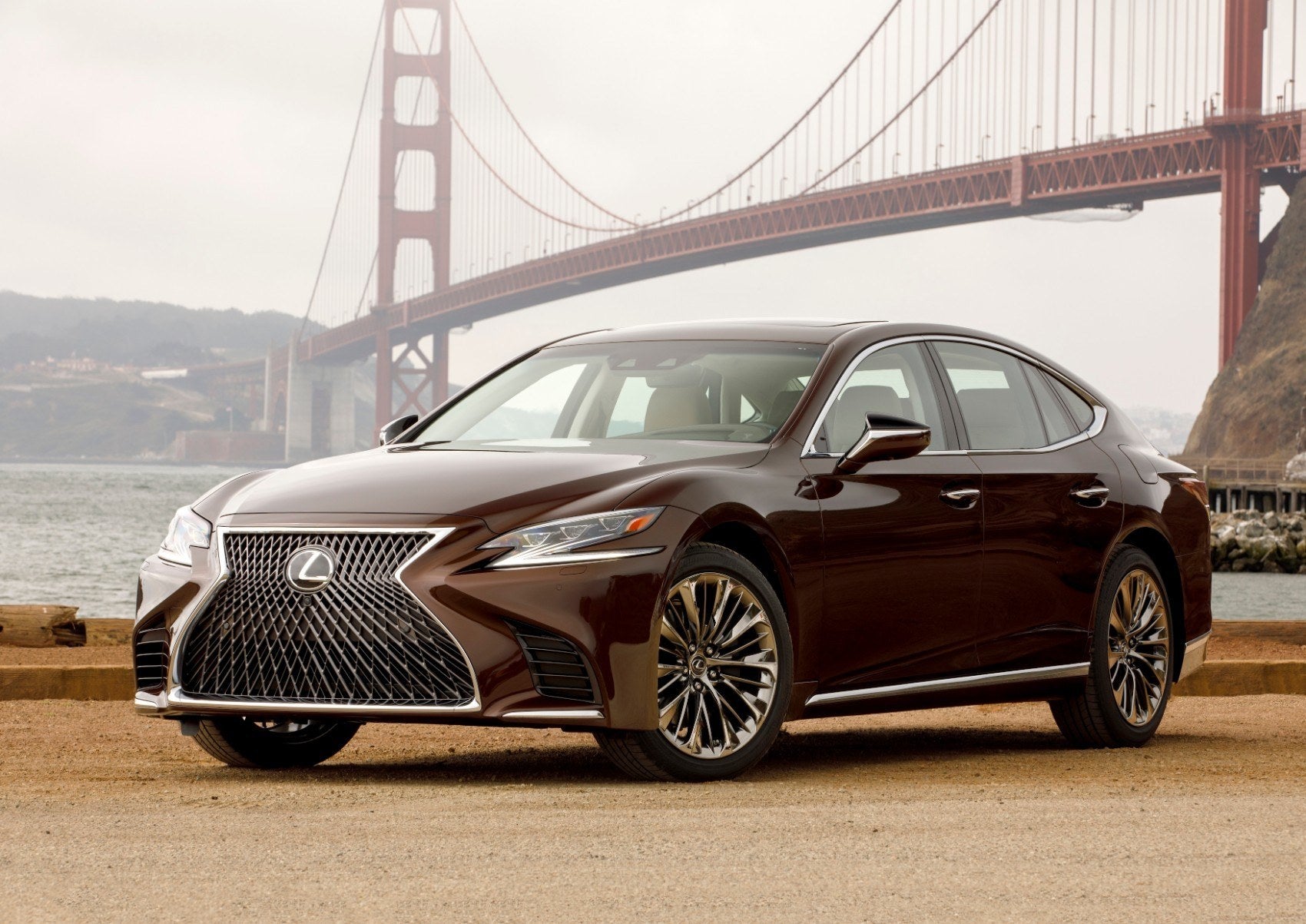