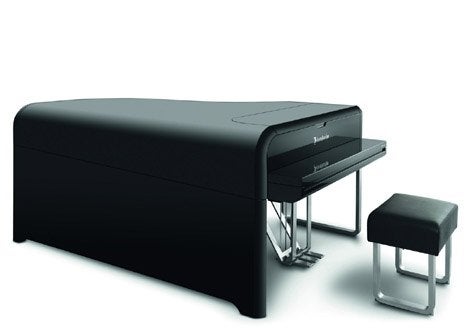 And the say that politics makes for strange bedfellows … it turns out that Audi has an in house industrial design firm, cleverly called Audi Design (sort of like the Porsche outfit that designs watches and sun glasses). Apparently Audi is doing this partially as a celebration of their 100th anniversary as an automaker, and to a car guy, some questions naturally arise. Such as “Who’s Bosendorfer?” and “Who’s going to get the connection between pianos and cars?”

I know this is all just some sort of coincidence, and not some nefarious plot to get me to both buy an Audi and a Bosendorfer, but it just so happens that Bosendorfers have my favorite keyboard action of any of the major piano manufacturers out there. Sure, it’s kind of heavy, but you can really lean into them, and they don’t complain much. Strong as an anvil, those Bosendorfers.

Which is good … to get you up to speed, Bosendorfers are Austrian pianos that originated in Vienna (the companies headquarters). They first made a name for themselves as being the only concert grand pianos that could stand up to the pounding that Franz Liszt dished out in concert. Other brands were, literally, reduced to pieces in short order under his playing. Keys would collapse and hammers would snap off and come flying out onto the stage.

Bosendorfers are tanks, and the sound is pretty darn good too. Not as sweet as a Steinway, but really close. The main downside for Bosendorfers is that they are REALLY expensive, 10 or 20 percent more than a Steinway, right off the top, and this Audi designed model sadly carries that trend onward. â‚¬100,000, or $140K in U.S. money, which is pretty steep.

And this isn’t just a one off get some attention for both companies, Bosendorfer is planning a production run of these things. So if you have the inclination, see your regional dealer; I’m sure they’d be happy to work with you.

Apparently the design team at Audi Design was made up primarily of young people who worked closely with Bosendorfer to make sure the overall design did not adversely affect the acoustics of the concert grand. Sure, that’s what they say, but it just so happens that I’ve done a lot of professional work with acoustics firms, and that whole “waterfall” element on the left hand side worries me, sound-wise. And I could go into the upper left hand corner design, and how that could effect the mid-range response, or the fact that no mention of materials used was ever made (and that’s of paramount importance), but this is a car website, so I won’t.

Got to say though, I DO like the look of the brushed aluminum for the pedals and legs. That’s a nice touch, and I’m sure the action will be great.

“You can imagine the respect with which we approached the challenge of redesigning a musical instrument. The limitations we faced were necessary as a means of stimulating our creativity. We were obliged to study the instrument in depth, and develop an all-embracing concept from the very start. The project was a useful source of experience for our young designers, and will benefit them later when they work on car design,” said Wolfgang Egger, Head of Audi Group Design.

Anyway, the Audi Design Bosendorfer had its world debut at a major ceremony yesterday at the Audi Forum in Ingolstadt Germany, and like I said, it will be available for purchase if you are so inclined.