When a 2009 Mazda MX-5 showed up on our review schedule, I was a bit concerned. See, I’m a little over 6’4″ tall, and shaped somewhat like a pear. I’ve never had much luck getting comfortable in smaller cars, and little compacts like the Honda S2000 and Mercedes SLK are completely hopeless. I figure the MX-5 (aka Miata) would suffer the same fate.

When they dropped off the MX-5, I was able to drive the car with relative comfort, assuming the top was down and seat was all the way back. But the size of the MX-5 is part of what attracts its buyers; being so small and nimble is what gives the driver such a close connection with the car, and the top down makes it a pleasure to drive. When the MX-5 Miata was introduced 20 years ago, it was an instant success, having brought back the enthusiasm of the old British roadsters. Driving enthusiasts rejoiced, and are still doing so today. The MX-5, while not as modern or refined as many competitors, was the original small roadster in North America and has more fan clubs than almost any other car in the world. It’s hard for any manufacturer to garner that many loyal enthusiasts for a car, so what makes this one so special?

Since I was never part of the roadster movement, and never fell in love with one, I don’t have brand loyalty clouding my judgment while driving this new Miata. After squeezing in and driving to the store, I see why people like these cars. Despite being a big guy, I can drive the MX-5 comfortably. The 6-speed manual transmission really should be the only option in this car, but a 6-speed automatic is available for people who don’t “get” this type of car, and the SV and Sport trims have a 5-speed manual instead. Assuming you do this right thing and go with a manual gearbox, you’ll get 167 hp out of the 2.0-liter four-banger sitting under the hood. Autos drop the power down to 158 – a victim of powertrain loss. Sadly, the MX-5 does not have a high-powered turbocharged version, unlike its competitors. Driving around town, I began noticing the shocking number of Miatas on the street, as each passing driver gave the casual two-finger fellow-Miata-driver wave of respect. Wow, people really do love these cars. I just had to find out why, so we decided to take it to the coast. I plugged my iPhone into the standard auxiliary jack, started my “Driving Music” playlist through the 7-speaker Bose sound system, folded down the roof, and off we went.

Thankfully, we had pleasant weather for most of the four-hour drive there and back, except for a 20-minute long thunderstorm that required us to close the top. This gave my skin a break from the vicious sun beating down, but for a tall guy like me, also made the cabin claustrophobic and uncomfortable. When the sun came back out I pulled over and held the button to fold back down the retractable hard-top, which takes only 12 seconds to go up or down. When the windy roads came, I really started to see where this car shines. Our review model had the $500 Sport Suspension package, which gives the car extra sharp handling through turns and pure driving pleasure. Suddenly my jaw began to hurt, not having realized I’ve been grinning ear to ear for the past 20 minutes. 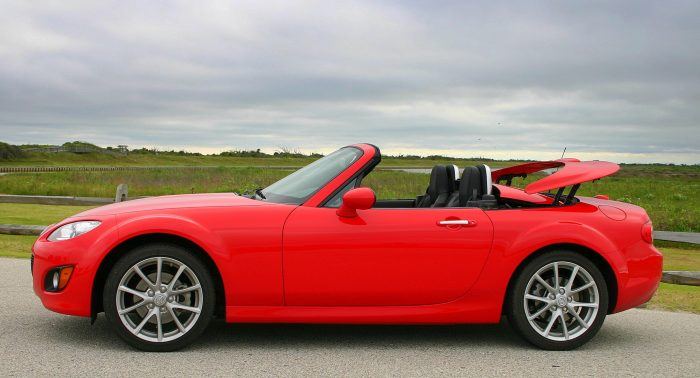 On the coast, the MX5 was rewarded with plenty of looks, despite many of the more “prestigious” cars cruising around. The styling was modified a bit for 2009 to make the car appear more aggressive – a welcome change from the pill-shaped car from last year, but I can’t get past the huge grin of the front-end. Cute, but looks just like Lightning McQueen. Despite looking like a Disney character, it’s not an unattractive car. While it may not be as aggressive as the Honda S2000 or Saturn Sky, it has a more humble charm.

The 2009 Mazda MX-5 is certainly more of an everyday driver than it used to be. Unlike some of the older models, you can now get quite a lot of luxury and technology bits thrown in, and still only barely cross the $30,000 mark. The 2009 MX-5 starts at $22,500, but doesn’t include A/C. Want the bare basics? At least go with the Sport trim, and if you’re looking to buy a daily driver, you can get into the Touring or Grand Touring packages for a few more grand. If you want the retractable hardtop, expect to fork out another $1,800-2,600, depending on trim level. I’d go with the soft-top, personally. The hardtop looks better when it’s up, but it’s heavier, more expensive, and you’ll have the top down most of the time anyway. 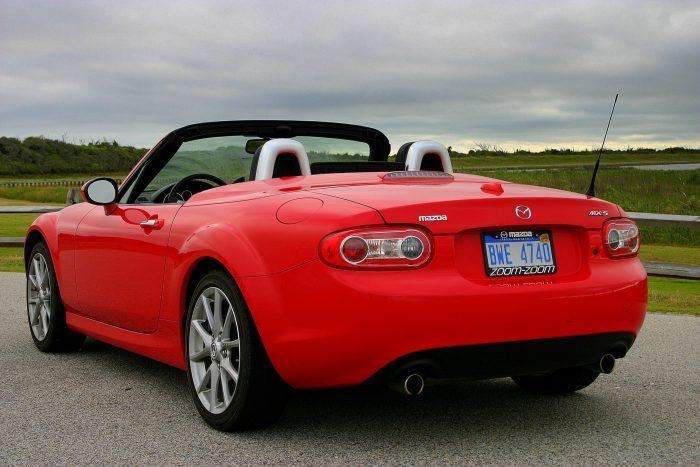 For 2009, the Mazda MX-5 Miata has stayed true to its roots, offering a light, fun, and quick roadster for people who look at driving as something more than just a method to get to work and back. And now that it’s even more drivable (and can comfortably fit a guy my size,) you can do exactly that, every day.