The mid-size family sedan segment is red-hot right now with an overabundance of vehicles to suit any driver’s taste. From America to Asia, consumers can choose from a soft and comfortable four-door to something that gets the blood pumping a bit. For the latter, Mazda says their recently-redesigned 6 sedan is the best choice out there.

First appearing in 2003, the first Mazda6 sedan offered a terrific sporty alternative to most family sedans. Offered with either a 160 horsepower, 2.3 liter four cylinder or a 220 horse, 3.0 Duratec V6, it handles curves beautifully while having room enough for a family of four and their luggage. The bigger engine even came with Mazda’s terrific five-speed manual, a rarity in this segment.

On the other hand, the 6 had some discernible qualities (or lack thereof) which left it far behind the likes of the Toyota Camry and Honda Accord. The interior layout and material quality was poor to put it politely, and the V6 ran out of steam too quickly compared to other engines in its class.

So where does the second-generation, released last year as a 2009, place this time around? Does this new Mazda6 improve on its faults while keeping the fun-to-drive personality?

Let’s start with what’s new. The first noticeable change on the Mazda6 is the new body. From the front, there is a wider fascia with larger headlamps surrounding a more pronounced grill. The front is stretched around to the front fenders, which now house very aggressive fenders that remind you of an old MG. From the fenders, the door line rises upward as the roof slopes down into the rear. There are another set of arches in the back fenders that roll into the more voluptuous rear end. The new exterior is certainly forceful compared to its predecessor. 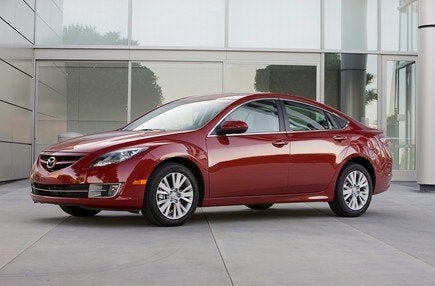 Once the new styling cues are absorbed, the increased size of the vehicle will be the next item perceived. Length has increased 6.9 inches to a long 193.7, while width and height are up over two inches as well. Luckily, weight has only increased 92 pounds in the four cylinder models, so there’s no need to worry about the 6 being too heavy around the waist.

And if you are worried about the added weight, there are two larger engines available. The DOHC four-cylinder has been bored out to 2.5 liters and produces a rev-happy 170 horsepower and 167 lb-ft of torque. If that’s not enough, Mazda offers their 24-valve, 3.7 liter V6 used in the CX-9. The 272 horsepower, 267 lb-ft will spin the front tires to oblivion if you’re not careful.

The interior receives an equally notable refreshing as well. The unloved sea of buttons, chintzy-looking rotary vents and lazy pop-up navigation screen in the old sedan are gone for a more balanced and upscale look. There is still a small strip across the top of the dash for the air and radio display, but now everything looks much easier on the eyes as well as more user-friendly. The optional navigation is still available, but it’s now a welcomed touch screen monitor in the center of the dash. 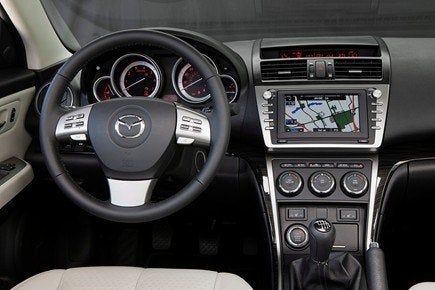 Thankfully, even with all the new additions and changes, the Mazda6 is still fun to drive.

It is still all-independently suspended, with double wishbones up front and multi-link in the rear, with big sway bars. In the Mazda6i Grand Touring tested, there is bigger seventeen-inch aluminum wheels wrapped in 55-series Michelin tires for added grip.

The steering is damn near perfect. It’s light enough to make quick inputs, but still builds force feedback nicely in the turns. There’s good front-end grip from the Michelins, and the body roll is kept to a minimum. The chassis feels so balanced and neutral in the corners that crawling under the car to make sure this really is not rear-wheel drive will happen. Simply chuck it into a sweeping corner, keep a little pressure on the gas, and the rear ever so slightly steps out, giving a feeling of sports-car euphoria.

When not pushing the limits of adhesion, the Mazda6 calms down and cruises smoothly, with a velvety-smooth suspension and terrific cushioning in the well-bolstered leather seats. Stopping power comes from rather small 11.8-inch front, 11-inch rear disks, and they show it with a soft pedal feel, but they do halt the 6 with strong stopping power. 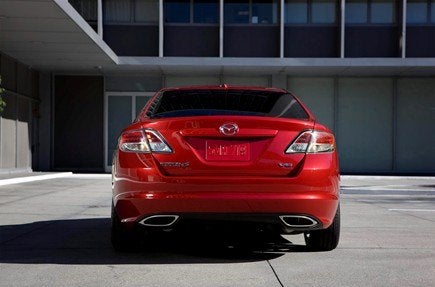 In this Mazda, the 6i comes with the 2.5 liter, while the 6s gets the V6. The smaller engine feels a bit down on power, and to move the car even briskly requires a heavy foot. Luckily it loves to get thrashed because it is silky smooth. The manual is terrific as well, with solid and precise shifts. The clutch is slightly peaky with its engagement point, but it is better than a lot of others in this market.

On the inside, the new interior design is leaps and bounds ahead of the older model. Behind a much better looking steering wheel are new gauges that now glow a fiery red numbering surrounded by a beautiful blue ring. The tiny rotating controls for ventilation have been increased in dimension as well as text size, making them far easier to use.

This top of the line model comes with all the techno-goodies Generation-X would love. The 6 has touch screen navigation with Bluetooth Hands-Free phone, 11-speaker Bose audio with iPod connectivity and Sirius satellite radio, Mazda Advanced Keyless Entry and Smart System with push-button start, and Blind Spot Monitoring in addition to all-automatic windows, sunroof, traction and stability controls, and the usual pantheon of airbags.

The control screen is crystal clear and responds to your inputs cleanly. The Bose audio sounds surprisingly good, and you are able to select what you want to listen to through the navigation, whether it be the satellite radio, auxiliary input, or Bluetooth music device. A really great feature is that it can record a song for you and then let you replay it if you want. The Blind Spot Monitoring system may not be to everyone’s liking, but the little display in my mirror telling me of a side-straggler saved me several times. There is a copious amount of room both front and back now, with 101.9 cubic ft. of overall passenger room, which lags behind the Honda Accord, but beats everything else in its class. The trunk is larger than anything in its class, at 16 cubic ft., which is plenty of room to carry a set of race tires if you care to push the Mazda6 to its extremes.

However, this is where the positive ends and the list of negatives begins.

Sticking with the interior, the newer layout of is very much appreciated, but the materials used in this sanctuary fall far back. It may look nice from afar, but once inside, the cheapness is deafening. The plastics are rough and tinny, the leather should really be called vinyl, and the buttons and knobs feel as if they would break if used too harshly. And for the performance of this car, I would’ve like a more driver-oriented cockpit. Then there is the navigation, which deserves its own story. I prefer a touch screen to other rotary dial-enabled systems, but this particular system is far too confusing. While some of the features like the audio control and entering simple information is easy, the menus are a chore to scroll through. Attempting to detour to another route or not knowing what Best Buy or Target were annoying, but when the system locks when moving is just downright aggravating. And why on earth is this not facing more towards the driver, so there is no need to stretch to reach buttons?

Finally, and one of the things bothering me the most, was the noise factor. Most of it came from the Michelin MXV4 S8s. These tires not only obnoxious on rough surfaces, but when pushed for any sort of reason, be it turning or braking, they would howl in agony. Then there is the engine, which at 70 mph is very vocal at over 3,000 revs. It’s hard to hear it over the tire noise, but on smooth pavement, it sounds like the car is accidentally in fourth.

I had high hopes for this car. I am a big fan of Mazda vehicles, especially the Mazda3 and the Miata. It truly is one of the few vehicles that are a great drive, but the cheap interior and ludicrous sounds emanating from outside really turned me off. The V6 is quieter, but without a manual transmission, it just doesn’t have the appeal to where I can row my own gears. If my commute was strictly off the beaten path, I would still choose this car. For anything else, I would simply walk away.