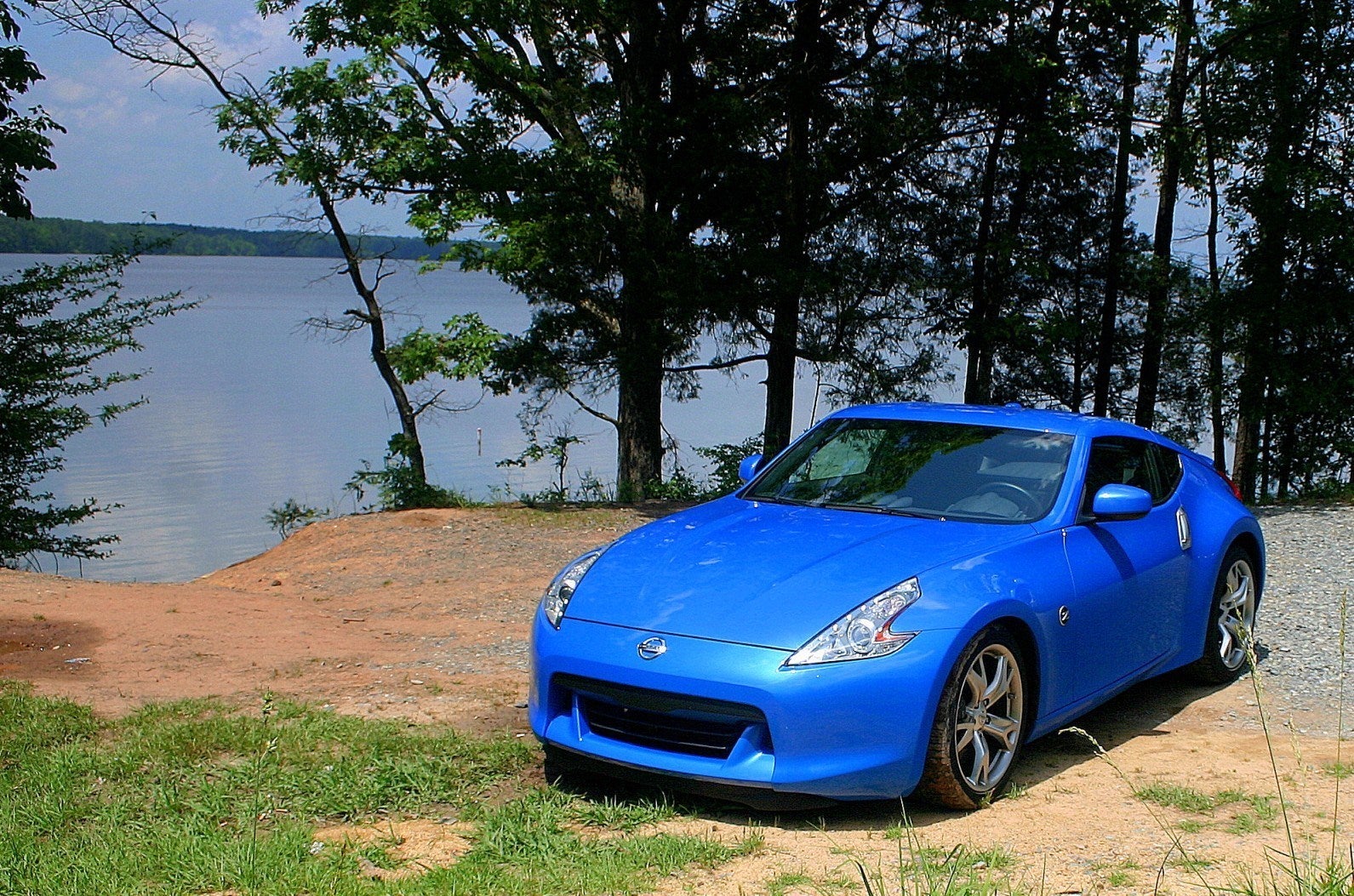 Unfortunately, this also means that there is a limited audience for such a car. Sadly, Nissan stopped production of the Z car in 1996 (2000 in Japan) with the second generation 300ZX due to waning sales. The Z car instantly became a collector.

In 2003, Nissan revived the Z by releasing the 350Z – an everyday sports car aimed at a much larger market than previous Zs. Fortunately for Nissan, they sold gobs of them. Unfortunately for Z-car lovers, the 350Z lacked much of what the Z was about. It was good at being a sports car, but something was missing.

The styling inside and out was bland, even boring in some parts; a properly tuned 300ZX TT could still blow the doors off of it, and it was missing the personality of the old Zs. The 350Z was meant for the regular Joe who said “I want a sports car” – not the enthusiast. 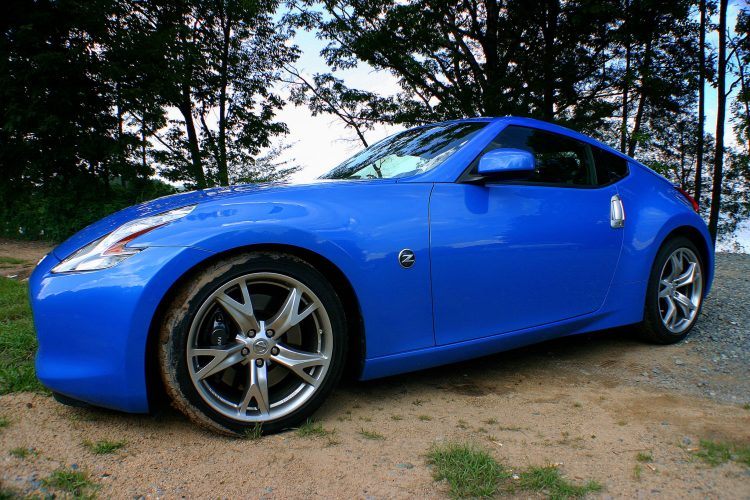 Nissan unveils the 370Z, and Z lovers rejoice. This is what we were looking for; a raw, in-your-face, aggressive, mean, loud, and brutal Z that can embarrass Porsche owners off the line, around the track, and back home for half the price.

Everything about the 370Z is better than the 350 – it’s faster, looks better, feels better, handles better, has more features, a nice modern interior, and has more storage space. Needless to say, I love this car. Yeah, it might look funky from certain angles, and I don’t like the “boomerang” shaped headlights, but part of it was styled from Nissan’s GT-R supercar, and it even has hints from the original 1970 Datsun 240Z.

It’s a good-looking car overall, sporting a muscular stance, which is something the 350 was lacking. The 5-spoke wheels on the Sport package are some of the best looking non-aftermarket wheels I’ve seen. The Z badges on the sides of the car now blink along with your turn signals. The weird “fangs” in the front are off-putting, and can even look like a catfish from the right angle. 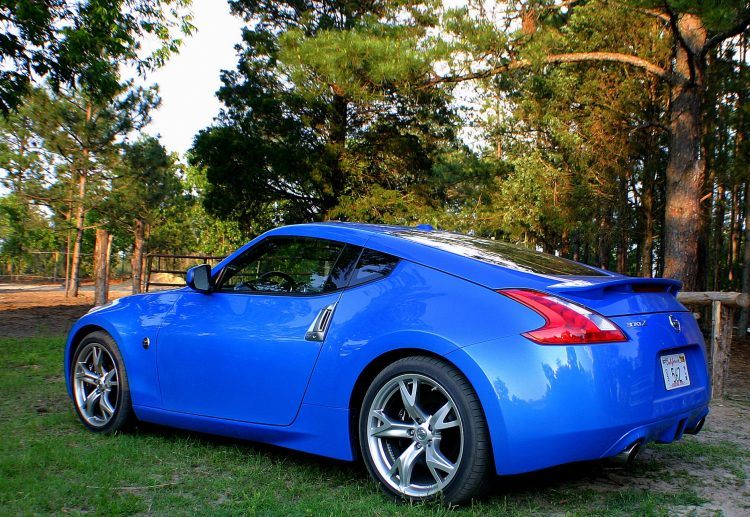 The interior is worlds above the outdated 350Z; high quality materials, comfortable seating, modern design, and even has a glove box! The knee pads attached to the center console are a wonderful touch – meant to keep your knees from bashing against the center console during hard turns. The strangely shaped steering wheel feels great, and the seats are perfectly bolstered to keep you in place.

And the way you’ll be driving it, you’ll need that extra support to stay in place. Step on the floor-mounted accelerator and the 3.7-liter, 330 horsepower V6 sitting under the hood will catapult you from 0-60 mph in about 5.1 seconds. Corners are swallowed with ease, as the new Z feels like it’s cornering on rails, with insane amounts of grip. Steering is precise and communicative. The exhaust note is addictive, but should be louder.

Suspension is tight, but not harsh. Aluminum in the hood, doors and rear hatch, along with smaller overall dimensions help the 370Z drop 290 lbs from the 350. Unfortunately, about 200 lbs of safety crap was added as well, so the 370 ends up only 90 lbs lighter than the outgoing model – it’s still a pleasure, in a day where cars just keep getting bigger and heavier. 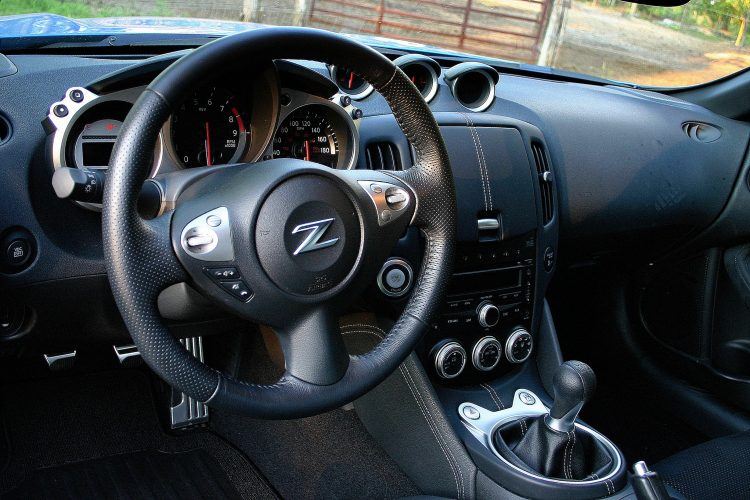 The manual transmission on our review model is perfect for this car, allowing tight, fast shifts through all six gears. I found the catch point on the clutch to be too high, which can sometimes lead to jerky shifts. I recommend the 6-speed, but you can also opt for the 7-speed automatic tranny with paddle shifters for no extra cost. Go for the auto and you miss out on SynchroRev – the much talked-about feature on the 6-speed that automatically blips the throttle on downshifts so you don’t slow down when choosing a lower gear. This is only available on the manual transmission with Sport package.

Here’s the deal with SynchroRev. It’s been bashed by most press and driving enthusiasts because it eliminates the need for the difficult heel-toe-downshift technique. These drivers have spent years perfecting this skill, and now Nissan comes along and lets every driver get the same result by pushing a button. The thing is, I can’t heel-tow shift; my legs are too long to contort that way without hitting the steering wheel. Not only that, but SynchroRev matches revs perfectly, 100% of the time. No driver, no matter how skilled can match that. So if you’re competing or doing timed laps, there is no reason not to love this. You may not feel that sense of accomplishment from heel-toeing, but you will have a better lap time. I really like this feature. 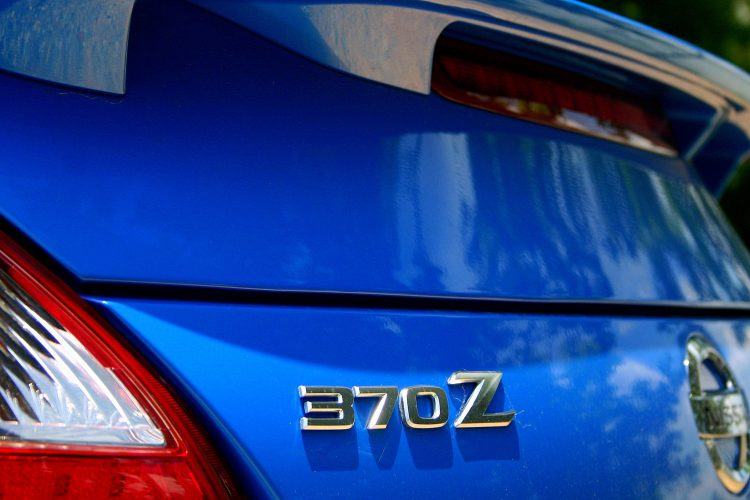 Two options are available: a $1,850 navigation system (skip it,) and a $3,000 Sport package. The must-have Sport package adds SynchroRev to the manual trans, limited-slip diff, better brakes, those gorgeous 19-inch wheels with better tires, and a front and rear spoiler. I love that Nissan kept it simple with the 370Z – two trims with two options. You can get more accessories such as illuminated kick plates and an aero kit as well.

Some things I didn’t like about the 370Z…despite a much more modern interior, the gauge cluster and center console buttons are illuminated orange, which looks old and ugly. Orange is not sporty – it needs to be white/blue and it would look great. The biggest negative about the 2009 Nissan 370Z is the large blind spot out the rear. You can’t see anything behind you – driving in a crowded parking lot sucks. You can thank the 240Z-esque rear quarter window for that. 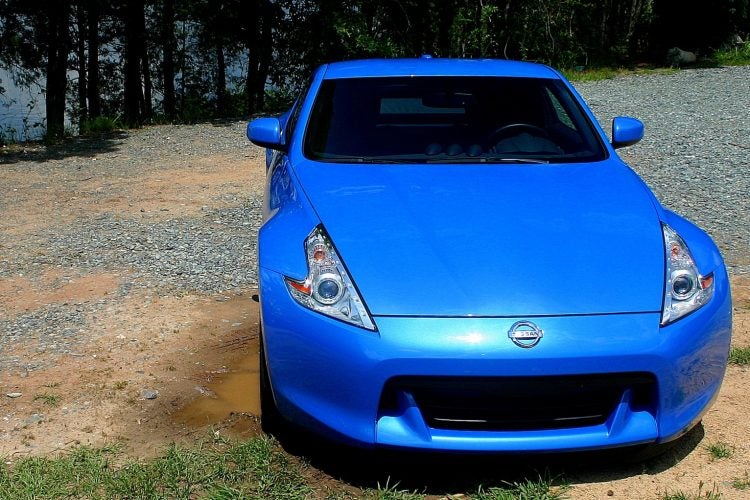 Fuel economy is 18/26 mpg who cares? You’ll be having too much fun to give it a second thought. While the fuel economy isn’t bad for this car, it’s not made for tree huggers. This car is a blast to drive, whether you’re on a windy road or stuck in traffic. You’ll also get more envious looks from passersby than any other car for $30K. I like the 370Z a lot more than I thought I would, and I am thoroughly impressed with what Nissan accomplished here. Now, Z-car enthusiasts can once again get excited about the brand. 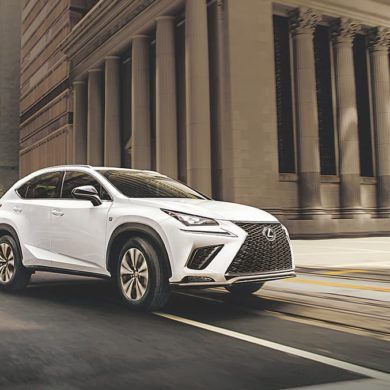