Hyundai Genesis Estate – Is the Wagon Style Coming Back?

With big SUVs and even smaller crossover SUVs becoming less popular as the price of gas rises (and the economy sinks,) Americans still need a vehicle with enough utility to carry their stuff around, and sedans just don’t hold enough cargo. For example, the 2009 VW Jetta TDI sedan has 16 cubic ft of truck space. Get that same car in the SportWagen edition, and the cargo capacity increases to 67 cubic ft with the rear seats folded down.

Another example: The 2009 Audi A4 sedan is spacious, but the truck can only hold 34 cubic ft of cargo. That’s big for a trunk, but the Avant (wagon) model can hold 51 cubic ft with the rear seats down.

As useful as they are, the wagon style has one inherent problem: they’re ugly. They’re not sporty, and are generally seen as uncool by Americans. It’s time we got over the uncool factor of wagons, and start using them for their exceptional blend of utility and practicality. Europe has… 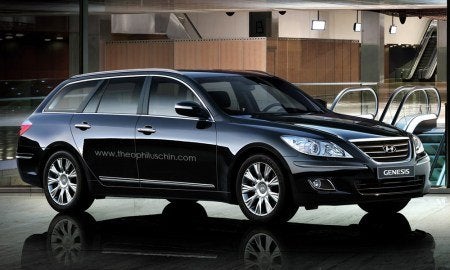 Slowly but surely, some manufacturers are beginning to release wagon versions of their sedans in America, hoping they catch on. Cadillac just announced the 2010 CTS Sport Wagon, which looks better than I expected. Nick just reviewed a 2009 Volvo XC70 – a fairly odd-looking wagon that he mostly enjoyed. The recently announced BMW 5 Series Gran Turismo is a sort of wagon, and many other sedans (like the Jetta and A4 mentioned above) are available as wagons. So what’s the next step? Who’s next?

When we reviewed the 2009 Hyundai Genesis Sedan last month, we were blown away with how much car you get for the money. It’s one of, if not the best value on the road today. Theophilus Chin, a damn-fine Photoshop expert, thought the Genesis would look good as a wagon, and created the Hyundai Genesis Estate, based off of the excellent sedan. As you can see for the pictures above and below, he kept the same dimensions, but added on the rear, which would add significantly more room to the already large cargo area in the Genesis. He also changed the front grille to more closely match that of typical Hyundai, instead of the Mercedes-esque, logo-less grille currently on the sedan. In his words, “Hyundai shouldn’t be ashamed to show its logo at the front. The Genesis is after-all a good car.” 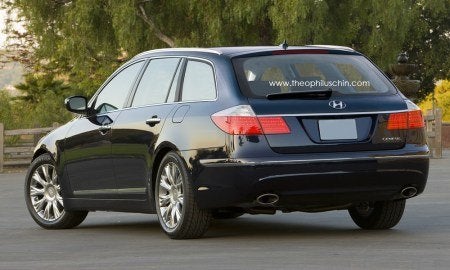 Should Hyundai create the Estate? Probably not, but it’s a good thought. First of all, the wagon isn’t going to appeal to the same buyers that the sedan attracts. The Estate would likely be a good value, but buyers probably wouldn’t stray from the proven luxury wagon-makers like Audi and Mercedes as easily as they will with a sedan or coupe; styles that have been popular in the States for so long. Also, Hyundai is taking a big risk releasing the Genesis line; the sedan and coupe are high-end cars; something Hyundai hasn’t been known for in the past. Let’s let those two models pull up Hyundai’s image a bit before they start releasing more styles and models; people need to know they can make a high quality car for an inexpensive price before they look into other styles not so popular in the States.