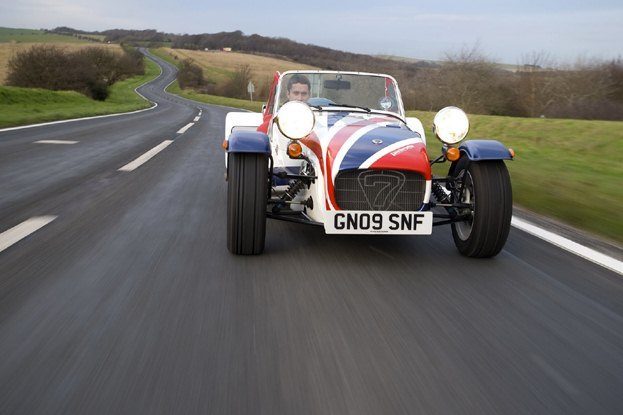 Amidst all of the gnashing of teeth and rending of garments about the current world economic situation, Caterham, of all people, is selling more cars now then they were this time last year. And no, it’s not because car buyers suddenly got an infusion of taste.

It would seem that why sales are up, is because former super car owners, looking to cut costs, are deciding to go the Caterham route, rather than more traditional high performance cars.

According to sources, this past April the small volume British company saw both a Ferrari F430 and Porsche 911 Turbo traded-in for the Caterham Seven, and that was just keeping up with a continuing trend. And really, apart from a lack of roof and most creature comforts (heaters are for sissies anyway), a Caterham Seven can easily run with the likes of a Ferrari F430 or a Porsche 911 Turbo … up till about 140 or so.

Then the laws of aerodynamics take over, and the brick-like Caterham just can’t get the air to move out of the way fast enough. But when it comes to getting to that sort of speed, Caterhams accelerate like the proverbial bat out of Hell.

The company’s faster models, such as the Cosworth-powered CSR260 can easily out accelerate most supercars, and even the base models are pretty darn quick, able to post zero to sixty times and skidpad numbers in the top two or three percent of the car world. And some of the higher output models have been known to comprehensively beat things like Suzuki Hayabusa super bikes.

And Caterhams don’t cost nearly what Porsches or Ferraris cost. Shoot, they seemingly cost about the same as a Hayabusa or a Ducati. In the US, Caterham’s range starts at around $30,000.

Yes, they’re kits and yes, you have to build them yourself (or have someone build one for you), but they are seriously high performance cars. Even with smaller four cylinder engines, a Seven can go from zero to sixty in the five second range and corner at around one G. Since they only weigh around 1000 pounds, performance come easy to a Caterham Seven.