They finally did it! They finally made a diesel-powered car that everyone can live with. In the past, diesels have been mostly ignored by US consumers, save for a small die-hard fan base. Most consumers didn’t even look twice at one, assuming they’ll be driving a slow car, spitting black smoke, dirtying up the air, and rumbling like a loud tractor.

Volkswagen has been selling the Jetta TDI is the States for years, but had to take it off the market in 2007 due to stricter emissions laws. For 2009, VW reworked the 2.0-liter TDI four cylinder engine, and made it better than ever. The new engine now produces a livable power rating of 140hp and a surprising 236 lb-ft of torque. It’s also cleaner than ever. It passes emission standards in all 50 states (even California) with flying colors due to a new exhaust filtering method that doesn’t sacrifice fuel economy.

The true beauty of what VW has done here with the 2009 Jetta TDI is in its subtlety. If you removed the “TDI” badge and gave this car to an average unsuspecting driver, he wouldn’t know it’s powered by a diesel engine, and that’s exactly what we need to get average consumers to drive diesels here in the States. 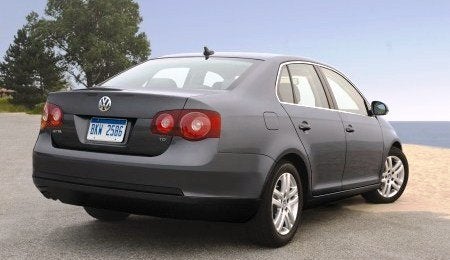 The sacrifices we once had to make when buying a diesel are over. The emissions are clean, the engine is quiet, and it’s easy to drive. At the time of this review, diesel fuel prices are even at the same level as standard 87 octane gasoline. The main selling point of buying diesel – fuel economy – is good at the EPA rated levels of 30 city, 41 hwy, but is even better in real-world testing. We were able to drive our test car from Raleigh, NC to Washington, DC, around DC and back to Raleigh (over 600 miles,) on less than a tank of fuel. This ends up being about 46 mpg on average. Take that, over-engineered hybrids! We didn’t even bother to draft off of semis or go under the speed limit; our average speed was around 70mph the entire trip.

Even ignoring the other logical benefits of this car, the 2009 Jetta TDI is a pleasure to drive. There is plenty of space in the front, and adequate room for rear seat passengers. I’m 6’4″ tall, and had more than enough room in the front, but couldn’t get totally comfortable due to a lack of lumbar support. Our car had the 6-speed manual, which we really enjoyed, or you can opt for the highly praised 6-speed DSG automatic transmission.

What really sets the 2009 Jetta TDI apart from its competitors (which happen to be small hybrid cars,) is that the Jetta is fun to drive. You’re not going to be enjoying the driving experience in a Prius, but now you can have hybrid-level fuel efficiency without falling asleep at the wheel from boredom. While the 140 horsepower isn’t anything to brag about, the often underrated torque rating of 236 lb-ft makes this car anything but sluggish. You may not be embarrassing sports cars off the line, but you won’t be lacking any power when you need it either.

The Jetta TDI standard feature list is impressive, including all sorts of acronym-laden safety bits, 8-way adjustable driver’s seat (lumbar didn’t work on ours,) 10-speaker 6-disc in-dash stereo with standard auxiliary jack, 16-inch alloy wheels, heated front seats, auto up/down windows (all 4,) cruise control, multi-function steering wheel, and 115V power outlet, among other features. Our model had no extra options, no packages, and no accessories, yet was still well-equipped, and you can get all that for only $22,270; which doesn’t include the $1300 federal tax rebate. A few things I didn’t like about the Jetta TDI: lumbar support didn’t work, which made the seat slightly uncomfortable. While the interior is clean, easy to use and efficient, it’s also somewhat boring, lacking any exciting aspect or attractive design. We left the headlights on in multiple occasions, partially because we were used to auto on/off headlights in previous test cars, but also because the warning chime after you take out the key is very soft and ended up being unnoticed. Lastly, the Jetta comes with a 115V power outlet, but only one standard 12V outlet. On road trips, it’s frequent that multiple gadgets need to be powered.

Ultimately, we love the 2009 Jetta TDI. Better-than-hybrid fuel economy, fun to drive, attractive, “cool,” and reasonably priced – what’s not to love? Our review model was a sedan, but the Jetta TDI is also available as a SportWagon model, which gives you 33 cubic ft of cargo room, or 67 cubic ft with the rear seats folded down. Why do small SUVs exist? If you’re in the market for a new hybrid, buy this car instead. If you’re just looking for a small/midsize efficient sedan or wagon, buy this car instead. 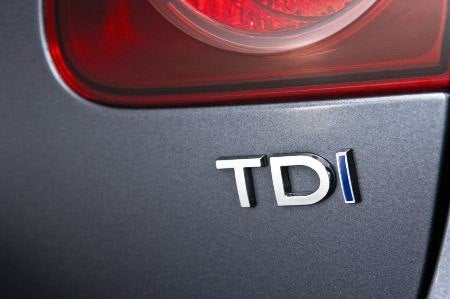