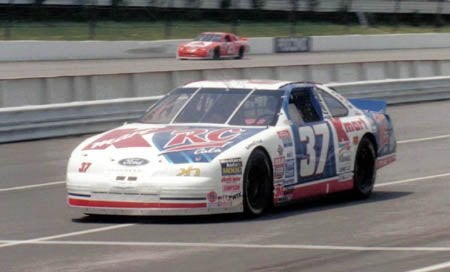 We don’t normally talk about racing much here at Automoblog, but since it is the month of May, and the racing season is really starting to cook, and this is something you don’t normally see in the racing world, it’s worth taking a look at. Jeremy Mayfield, NASCAR driver and team owner along with two others failed a mandatory drug test and has been put on indefinite suspension.

Mayfield has been a NASCAR racer since the mid-90s, and recently decided to become a driver/owner, mainly do to the lack of rides being offered to him from more established teams. The two other guys involved, Ben Williams and Tony Martin, were not part of Mayfield’s organization but were busted during the same round of drug testing. Ben Williams was a crewmember of the #16 team and Tony Martin was a member of the #34.

Mayfield is the first high profile NASCAR driver to be booted from the series for a drug violation, and let’s face it, this sort of deal is quite rare in the racing world. NASCAR has released scant specifics on the incident, saying only that “All three were found to have violated Sections 12-1 (actions detrimental to stock car racing) and 7-5 (violation of the NASCAR substance abuse policy) of the 2009 NASCAR rule book.” And that’s going to be that unless the three guys involved release the info themselves, because the substances found get shielded by NASCAR’s privacy policy. Well how convenient.

But hey, since this is the internet, we can speculate … and to me, this is going to be one of two things: either pot or steroids.

NASCAR has had a real bee in their bonnet since day one about ANY illegal substances. They’ve been trying to shake that whole moonshiner image since before they started. So I can understand why, as an organization, they’d be predisposed to take a Nancy Regean-esque view on the subject. Now, banning a guy for having pot in his system strikes me as being particularly stupid, unless you have evidence that they’re on the track while high, And seriously, who in their right mind is going to race while stoned? Racers are, by and large, way too into racing to do it in any way BUT clean and sober. So, if it IS pot (and we don’t know for sure), and they were doing it off track, that’s a pretty BS reason.

Now steroids, that’s another question entirely. When I was working in the motorpsorts sponsorship industry, another NASCAR steroids case popped onto the radar. I can’t remember the kid by name, but it was some young up and coming scion in one of the very minor league feeder series. Kid was still in his teens, and it was plainly stated in all the reports that he was using a whole host of performance enhancing steroids.

When I read this, I remember remarking out loud, “Why the hell would a race car drive need steroids?” Bill, my boss and company owner, heard me, and walked over to my desk. “You talking about the So-and-so deal?” “Yeah. What’s up with that?”

What was puzzling to me was that steroids, drugs that make you bigger, stronger and more bulky, have an interesting application in the racing world. Now normally, most of the things that steroids provide would be a hindrance. A muscled up race car driver would just be a packaging problem, but there’s a side effect to some steroids that some drivers feel might be an aid. This particular side effect actually ends up enhancing a persons eyesight, ergo, with sharper vision, you’re a sharper driver on the track.

Now, this isn’t all that widespread, nor is it widely known (it would seem) nor has it been confirmed as actually working. But, racecar drivers being hyper-competitive, it would figure that some of the less scrupulous among them would go this route (i.e. cheat) and give it a try.

But like I said, this is all going to remain shrouded in mystery unless any of these three decide to speak up.