The Hamann-Imperator, A Big Bad Bentley This is the Hamann-Imperator, which is essentially a Bentley modded to within an inch of its life by Germans. I know what they’re going for here, name-wise, but you’ve also got laugh when you first read it or say it (for the first 25 or 68 times), because Imperator is quite the moniker to choose for a car. We can only assume that they already have the Hamann-Tyrant in the works, and we’ll get to see that later.

First off, in the official nomenclature, it’s HAMANN-IMPERATOR, in all caps, and they never fully explain why. Maybe they want us to shout it whenever we speak its glorious name, I’m not sure. Secondly, Imperator is a funny archaic word to use. In case you’re interested, the definition is thus:

Hamann, the company responsible for all this overbearing road-goodness defines their product this way: “The stylish refining programme for the Bentley Continental GT and Continental GT Speed.”

To me, if you’ve got to go buy a car called Imperator, it means you’re compensating in ways and to a scale that says there’s not enough Nagel prints in the world for someone like you, and that your personal assistant really loathes you, but you’ll never notice until it’s too late.

For starters, it’s a body re-do. The whole front end has been completely reconstructed, featuring larger air inlets in connection with more integrated daytime running lights to give the car “an even more dynamic face.” The front end optimizes the airflow and reduces lift. Hamann has also flared the fenders, added side skirts to ” … make the noble sports car look even lower and more elongated” (no, seriously), and have slapped on a spoiler at the rear along with a diffuser for additional down force.

Hamann goes all out on the way-big wheels. The rims are named ANNIVERSARY RACE ANODIZED, all caps, and at first you think that’s a bad translation by a hack Japanese boy racer aftermarket company. But no, that’s the honest-to-God name of the wheels from an outfit based in Laupheim, Germany. The wheels are enormous multi-part forged 22-inchers (because size IS important) with a high-gloss polished rim flange and a black anodized rim star.

They sport 265/35 R 22 tires up front and 305/30 R 22 meats out back. God knows who stocks tires like that, and you know their cost ain’t going to be pretty. Hamann does say that they offer 21 inch wheels, but you know, and I know and Hamann knows those are for p*ssies, so it’s best if we not discuss them further. Oh yeah, there’s also new springs front & rear that lower the Bentley by 30 millimeters and 20 millimeters respectively.

Of course the mill has been worked over, but not as much as you would expect. There’s a sports end muffler with oval stainless steel end pipes and new engine management resulting in an extra output of approximately 40hp and a torque increase by 90 Newton meters. The top end also gets a 5km/h bump.

The interior is slathered with enough leather and carbon fiber and this or that kind of trim to make you feel as different and special as your inflated bank account says you are. 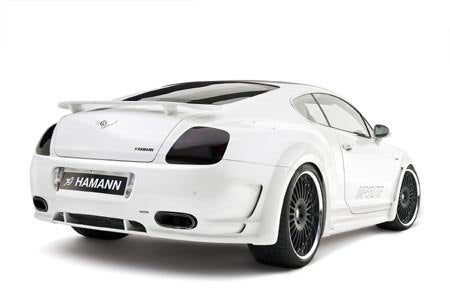