So, here’s the latest Audi Q7 SUV. Yes, another SUV. ‘What is Audi thinking,’ you might ask, but Audi is doing OK, money wise, so maybe they aren’t throwing money down a hole occupied by non-viable transportation options. Whether SUVs have a future on the streets of the world is debatable, but the next-gen Q7 is here, and you know Audi is going to sell a bunch of them, so why not take a closer look. Like the last 2009 Audi Q7, the latest iteration is a hulking brute of a ride. They’ve rounded the corners to soften the presence, but this is still an oddly proportioned ride with strange styling cues. Or perhaps I should say styling cue, singular. As in that enormous fish-mouth grill. Damn thing looks like it’s big enough to swallow a MINI whole, and although it won’t win over any design converts in places like Pininfarina, you won’t go mistaking the Audi Q7 for another SUV. 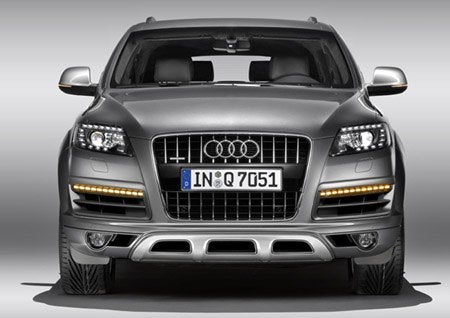 Which is interesting, since underneath, the Q7 shares a lot (OK most) parts with its corporate siblings, the Porsche Cayenne and the VW Touareg. Audi doesn’t exactly shy away from this fact, but you do have to read between the lines.

Substantially reduced fuel consumption in all engines, and
The world\’s cleanest diesel technology

World\’s cleanest diesel technology? Why, where could they get that from? Answer: VW’s new, 50 state legal oil burners, that’s where. Anyway, we say great on both counts. There’s a lot of negatives to SUVs from my perspective, running costs and enviro impact being two of the biggest, so anything a company can do to lessen those two will make it more appealing. The new Q has an available TDI diesel that gets 26.43 US mpg, which is impressive for something as flat and heavy as a Q7. And yeah, it IS big, it just doesn’t look big. The q features a 118.11-inch wheelbase and an overall length of 16.70 feet. There’s enough room on the inside so that the seatbacks in the second row are divided into three fold-down sections to provide a level cargo floor, and the luggage space has a volume of 71.87 cubic feet. There are six mills available in the new Q7, all of them are direct injection engines. Two of them gasoline-powered and four diesel engines, including the world\’s most powerful diesel SUV, the Audi Q7 V12 TDI [writer suppresses demonic laughter/urge to stuff engine into a VW Golf]. Power gets to the tarmac via a six-speed tiptronic to the quattro permanent all-wheel drive, which distributes it between the axles with slightly more than half to the rear. 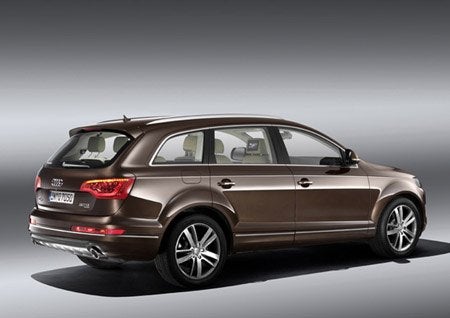 Wanna stop all that weight mass and interior space? No problemo. There are optionally available carbon-fiber ceramic disk brakes that are a whopping 16.54 inches in front and 14.57 inches at the rear. A total of 24 pistons are used on the front and rear axles. 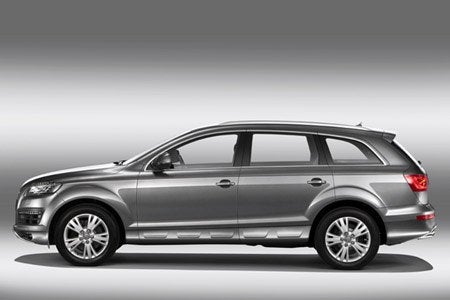 Nifty names to be sure, but that God-awful Teak brown has got to go. 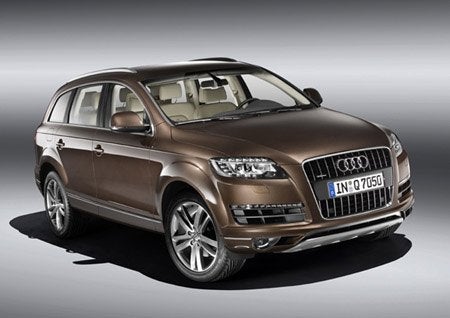