There aren’t many large family sedans that we get excited about – especially one as mass-produced and sold as the Audi A4. After all, the A4 saved Audi from dying off in the United States in the 90s by selling so many of them.

Even with good sales in the States, A4 sales still fall behind those of the super-popular BMW 3-series. Something along the lines of three 3-series’ to one A4 sold in 2008 (although that includes the BMW coupe; a body style Audi reserves for the A5.) Audi intends to change those numbers with the release of the 2009 model, upgrading just about everything on the car, and taking back a little bit of the luxury sedan segment from BMW and Mercedes.

Table of Contents show
New for 2009
Options and Trims
Fuel Economy
Design
Driving
What We Liked
What We Didn’t Like
Overview
Pricing and Warranty
Competitors
2009 Audi A4 Photo Gallery: 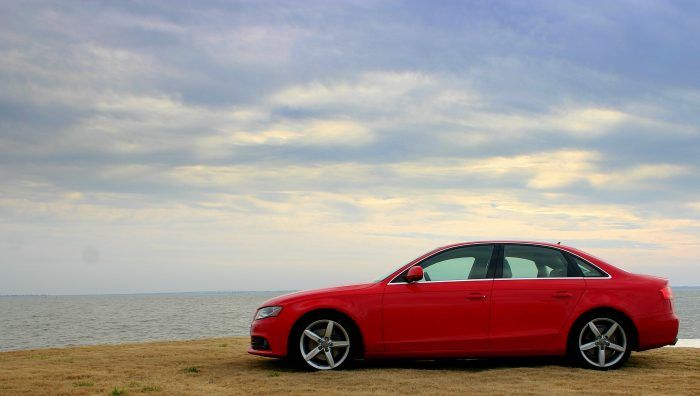 There’s no doubt that the 2009 Audi A4 is a better car than its predecessor in nearly every way. Larger inside and out, Audi stretched the A4 another 2.1″ wide, 4.6″ long, the track by 1.8″, and the wheelbase is a whopping 6.6″ longer. Despite the extra size, the A4 still feels nimble in the turns and has a surprisingly good turning radius.

Audi introduces an all-new engine this year as well – a 2.0-liter turbo’d 4-cylinder producing 211 horsepower, which looks great on paper (we didn’t drive that one.) We drove the reworked 3.2-liter V6, which manages 265 horsepower. It has the new sexy LED daytime running lights styled after the R8, which is now a trademark feature. Other changes include a great new modern interior, lowered wind resistance, lighter and stronger parts, and more interior room. They really went all out to make sure the A4 was thought about every time the phrase “3-series” is uttered. They’ve gone as far as making the air conditioner 20% lighter and consume 10% less fuel. Ever picked up an A/C out of a car? Damn things are heavy!

The A4 also gets plenty of new tech toys in 2009 such as adaptive cruise control, a new MMI interface, rear-view camera, a blind-spot detection system, and Audi Drive Select, which allows you to dynamically adjust suspension, engine response, and steering to make the car a long-distance cruiser, a sports sedan, or anywhere in between depending on your mood. The 2009 Audi A4 is available in both 4-door sedan, and Avant (wagon) variations. A Cabriolet (convertible) version is still available for 2009, but carries over the same style from 2008. The Sedan and Avant both share the same trim levels – Premium, Premium Plus, and Prestige, which are the same across most of the lineup. Despite the name, the “Premium” trim is the base model, coming standard with 17-inch alloy wheels, cruise control, sunroof, fog lamps, leather, TPMS, and Audi’s MMI system with auxiliary jack, 10 speakers with subwoofer, and satellite radio. You can’t really go wrong with even the base equipment.

The addition of a Sport package adds 18″ wheels to the Premium and Premium Plus models, shift paddles for tiptronic transmissions, sport seats, sport suspension, and summer tires. Prestige models get the S-line package, which adds everything from the Sport package plus 19-inch wheels, leather/alcantara interior, sport seats with embossed logos, new front and rear bumpers, and brushed aluminum trim. A very good choice to separate your A4 from the rest at an extra $2,450. Additional options include a navigation system with reverse camera, adaptive cruise control, Audi Drive Select adjustable suspension system, and rear-seat side airbags. The latest styling trends from Audi are exceptional. The new LED running lights below the headlights look great, and the dark bar across the grille adds a muscular feel. This car gets a surprising amount of attention on the road, as it can be confused with a sportier model in the Audi line. If you opt for the S-line package, the modified body gives it an even sportier and aggressive look.

The new A4 interior is elegant and luxurious, and gives the feel of a more upscale car. My one minor complaint is that the center console storage area is very small. C’mon, I have to find something wrong with it. Other than that, the interior is gorgeous, particularly with dark leather interior and aluminum accents. The 2009 Audi A4 is a great all-around car, perfect for long road trips and daily commutes alike. The interior is exceptionally comfortable and accommodating. The 256 horsepower 3.2-liter V6 in our car was very smooth and refined, and plenty powerful. Our tester was equipped with the Audi Drive Select, which allows you to choose between Comfort mode, Sport mode, and anywhere in between. The difference is noticeable as during Sport mode the steering tightens, the suspension firms up, and the engine and throttle are more responsive.

Driving long distances in the A4 is not tiring. The suspension was soft and smooth, but not so much that you feel like you’re driving a bowl of pudding like some luxury cars. The road and wind noise are nearly non-existent; a noticeable improvement over previous models. The trunk in the 2009 A4 is big, but rear passenger room suffers slightly for it. Front driver and passenger room are excellent though, with more than enough leg, shoulder, and headroom for the tallest of drivers.

I need to add that the built-in navigation system in the A4 does allow you to use it while moving, unlike many new cars. This is a HUGE plus, because apparently other manufacturers don’t consider that you could have a passenger with you, so they lock the system while you’re moving, which is very annoying. Despite the 2009 Audi A4 coming hugely recommended by us, there were a few things that Audi needs to iron out. First, the transmission is a bit jerky at low speeds. When slowing for a stoplight and downshifting from 3rd to 2nd to 1st, the shift is rougher than it needs to be. This is mainly while in Dynamic (Sport) mode.

I also found that navigating the Bluetooth phonebook and directory on the built-in system after importing from your phone can be frustrating and confusing. I never did get the voice activated dialing to work, despite following all of the instructions. I also never could get my iPhone to play music through the MMI interface, although there may be an adapter cable for that. And while we’re talking about the tech – the navigation system, while generally very good, took us the long way around on many occasions, when there was an obvious shorter way to our destination. It places too much importance on big roads, and will take you 4 miles out of the way to get to a destination that is only 1 mile away if you’re willing to take a residential street. It also won’t let you search by name for a Point of Interest – it makes you search by category, which is a common problem with on-board nav systems.

The overhauled 2009 Audi A4 suddenly became a big threat to the BMW 3-Series, and a thorn in the side of other cars in this class. It has more room, more power, better fuel efficiency, better looks, better technology, and a better interior. We loved almost everything about the A4, and can’t wait to see what they do next. A Sport package will set you back $1,450, but if you’re already going for the Prestige trim, snag the S-line package for $2,450 if you’re into the sporty thing. I wish the S-line package was available on the Premium Plus trim – you shouldn’t be forced to get the lane change assist and premium sound just to have Alcantara leather, sporty accents, and a sexier exterior.

Options get very expensive. The Audi Drive Select system is great, but runs $2,950 – not worth the price for most people. Adaptive Cruise Control is $2,100, sun shades for the side doors are $500, Bluetooth is $500, and making it compatible with an iPod (Music Interface) is $350.