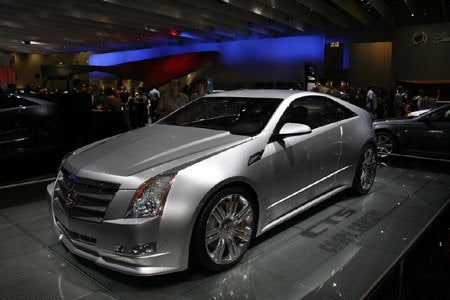 The continuing soap opera that is GM (if not American car manufacturing in general) continues with more twists and turns than a misshapen corkscrew. In today’s installment, the part of young Doctor Powers, he who would save the youthful and well healed of Grosse Pointe is played by the Cadillac CTS-V Coupe. What? You thought that young Doctor Powers/ the Cadillac CTS-V Coupe was dead, killed when the evil “socialist” government overlords wouldn’t give enough of their money to poor, poor GM?

Nope, looks like the Cadillac CTS-V Coupe is alive.

According to some spy shots that turned up at SEMA’s website the other day, it looks like work on the Cadillac CTS-V Coupe is either continuing apace, or has picked back up again. As Chris, our supreme commander here at 1 Automoblog towers pointed out via email when he sent this my way, “Good thing though, it will ease the pain from the ex-XLR.”

Indeed, that had occurred to me as well. It seems that Caddy, via internal GM realignments, was slowly yet forcefully moving towards bringing some engineering heft and drivetrain muscle to Cadillac, something the division has needed since … well, near as I can remember about 1974. Seriously, just look at where Caddy is or has been for ages. Cadillac used to be the number one car company (or brand, if you will) in the world before WW II. Their company slogan was “Cadillac, The Standard of The World,” and they weren’t kidding. Everybody in the world looked up to them. Sure, maybe folks like Duesenberg or Bugatti could pick a bone or two, but Cadillac was, well, the Cadillac of car companies.

You wanted performance, technical innovation, comfort and speed? You seriously considered Caddy. Today? You want a nice comfortable car Aunt May will feel good in, you consider Cadillac … and that is a very long way to fall.

That was starting to change though. Cadillac was slowly making inroads into making rides that enthusiasts would consider, and they were banking on making cars that were more than a “consideration” for young-ish would-be buyers of BMWs and Mercedes. Check out the aforementioned XLR. That was essentially a Corvette drivetrain and chassis with a Caddy body featuring a retractable hard top. It was the first time Corvette had ever let its bits be used by another GM division (something that was like pulling teeth the way I heard it). The XLR, although not to my taste, was not a car to be trifled with.

RELATED
2021 BMW M5: High-Performance 5-Series is Better Than Ever

More importantly, it signaled that Caddy was serious about recapturing its past glory, and there would be more like this to come.

Cars like the CTS-V sedan, with its big wompin-stompin’ mill and impressive chassis set up, was next and served to further back up that Caddy claim of, “Yeah, we mean it.” Next up was a coupe version of the CTS-V, but a funny thing happened on the way to the drag strip. The world economy took a tumble … took a hell of tumble actually, and GM, a company that has been run from the accounting department since Sloan, decided to save costs by performing radical surgery on any appendix-like divisions or single car lines. So in addition to saying adios to divisions like Saturn, GM also disbanded its High Performance Vehicle Operations (HPVO) team, the same crew responsible for V-series Cadillacs, the Chevy Cobalt SS and HHR SS. And so we were told that the CTS-V coupe was buried.

But spy photographer Brenda Priddy told SEMA that the HPVO team still has one trick up its sleeve.

“The last time we saw a CTS Coupe V-series prototype was in August 2008. It’s absence since then, combined with GM’s Viability Plan submitted to Congress, had many thinking the hot-rod coupe had been killed off. These new photos show that the V-series coupe is alive and well,” Priddy says.

Priddy says that what she’s seen recently at test tracks looks production-ready down to the wheels, exhaust tips and V-series badging. The coupe even has the same wire mesh grilles, power dome hood, wider tires, larger wheels, huge brake calipers and two massive, center-mount exhaust outlets unchanged since the coupe was on the auto show circuit. Under the hood is the 6.2L, supercharged V8 LSA motor, that’s good for 556 hp and 551 lb.-ft. in the CTS-V sedan, expect the Coupe V ratings to be very similar.

“Anticipate the V-series coupe to start production next summer when the regular coupe starts rolling down the line at the Lansing Grand River plant,” is SEMA’s prediction, and who are we to argue? 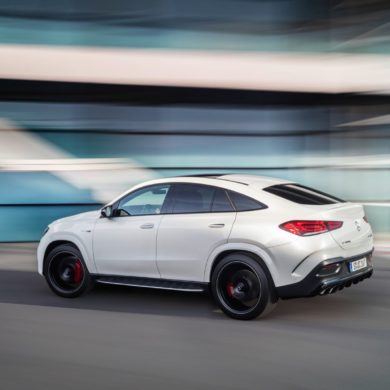