Top Gear, the much beloved BBC show aimed squarely at you and me (the gearhead) recently branched out to make versions of their show in Australia and the U.S. To show that the good ol’boys here in the U.S. of A. are not lacking for lunatic ideas, they recently announced they were going to build up a car that would get 70 MPG, cost less than $7000 and do zero-to-sixty in seven seconds.

Crazy you say? Perhaps, but they’re using a ’81 Volkswagen Rabbit Diesel as a starting point, and that was enough for me to say, “This just might work.” See, I used to own a 1979 VW Rabbit diesel. It a lot of ways, it was a very fun car. It was very fun because it was so amazingly underpowered, you had to stand on the gas peddle 24/7 just to get anywhere in a reasonable amount of time. Driving the car meant flogging the car, but from the outside it looked like you were driving it like a normal person.

The real upside of the VW Rabbit diesel? That’s easy, the mileage. On the highway, it would routinely get 53 to 55 miles to the gallon, so the Top Gear USA guys, via their website at TopGear.com are starting off from a strong position on that front. And as far as the seven grand figure goes, that should be pretty easy too … after all, how much does a used Rabbit cost? 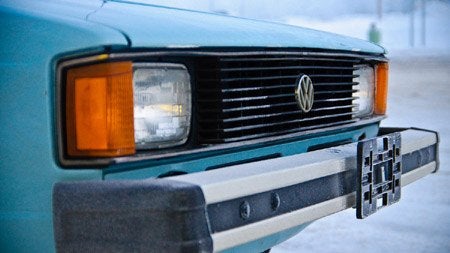 First off, the Top Gear guys are going to yank the old engine and swap it with a turbocharged VW TDI engine. Smart move. The TDi is cleaner, and puts out way more power (like it could put out less?), and an 81 Rabbit weighs in at around 1800 pounds, so it’ll be light from the get-go.

If, and this is just me speculating, you were to mount something like Hoosier Auto-X tires, I bet you’d get pretty damn close to that 7 second zero-to-sixty time right there. No, running a car every day on Hoosier Auto-X tires is not for everybody, and might not be a practical idea, but I’ve seen people do it. And boy does it improve the performance of your car. Sure, you have to get new tire every 9 months to a year, but you can’t have everything.

After fiddling with the drivetrain, TG-USA heads to Southern California where they will meet with UCLA aerodynamics professor John McNulty for expertise in making the car more slippery. Good idea, because a vintage Rabbit, fresh from that “folded from a single sheet of paper” design school isn’t very aerodynamic, so anything will help … at least with that 70 MPG figure. Any sort of aero work isn’t really going to come into play until a vehicle is doing at least 60 (give or take) so that sort of thing will only help with top end and MPG figures. Naturally the TG-USA guys are going to tweak gearing, fit low rolling-resistance tires, use special low-friction oils, it’ll be the whole kitchen sink approach.

Will this work? Well, if you’re not watching the show, we’ll also be updating their progress here.