Bentley couldn’t wait until the Geneva Motor Show to unveil their “ultimate” car. Obviously based off of the Continental GT, the Continental Supersports gets the title of Fastest and most powerful Bentley ever made.

Starting with a Continental GT, Bentley dropped the two rear seats and replaced the front seats with carbon fiber versions. This effort, combined with other lightweight components drops the Continental Supersports’ weight by about 243 lbs from the Continental GT Speed.

Bentley also seems rather proud that the Supersports can run on either E85 FlexFuel or regular petrol. I guess that’s their half-assed attempt at showing the public that they’re trying to be environmentally friendly.

The Bentley Continental Supersports started off as a simple experiment to reduce weight and increase power on the Continental GT. The result was an increase from 552 to 621 horsepower (the Continental GT Speed has 600 hp,) a 0-60 mph speed of only 3.7 seconds, and a top speed of 204 mph.

The thing that differentiates the Supersports from other E85-running cars is that it continues to develop the same 621 horsepower whether it’s running on the FlexFuel or regular petrol.

Various other enhancements add to the extra speed and better handling, such as a wider rear track, lightweight 20-inch alloy wheels, and lightweight steering components. Those extra vents you see add to additional airflow to the 6.0-liter twin-turbo W12 engine.

Also included is a new “Quickshift” 6-speed transmission which cuts shift times in half, and allows for those excellent double-downshifts – one of the only reasons I don’t like typical paddle-shift systems in supercars.

Until the Continental GT, Bentley hasn’t really been known for being a manufacturer of high-performance supercars. Even now, it’s difficult for people to relate them. Despite having a twin-turbo, high-output W12 engine, two doors, and impressive acceleration times, the Continental GT is still undeniably a luxury car.

With the GT Speed and now the Supersports, is Bentley trying to change that image, or just prove that you can have the best of both worlds? 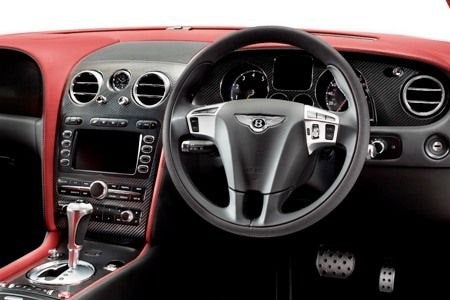