First off, you ain’t doing the driving, Jeeves will be taking care of that for you. And second, there is no second. What kind of car? An S-Class? Please, that’s what your chef drives? A Rolls or Bentley? Please! A Maybach 62? Perhaps, but perhaps it’s still a little plebeian for you. There is only one answer:

Now, you go back to your truffles dipped in the blood of newborns, Jeeves and I will take a look under the hood.

First off the Maybach is, essentially, the top of the line. Anything higher, and you’re deep into bespoke territory, and dealing with people like Figoni et Filacci on your body design. Maybach has been at this since the 30s.

The new Maybach Zeppelin is a brute of a car, and, at roughly the size of a minesweeper, has a road presence akin to a Soviet tank, only with a much better interior.

Power? You want power? How about a 6.0 liter V12 biturbo under the bonnet, which now delivers 640 hp and a peak torque of 1000 Newton meters? That enough for you?

Wheels? The Maybach Zeppelin features newly designed 20-inch wheels in a Chrome Shadow finish. First they were painted with a black undercoat, then a silver topcoat applied using an elaborate painting process that causes the tone to gradually increase in darkness from the outside in. That enough bling for you Puffy? Oh, not to worry, Sean Combs couldn’t afford one of these.

There’s herds of leather, and there’s special two-tone paint. The interior looks like something from a sultan’s yacht, yet the whole thing is surprisingly understated (those Germans!). Think that’s over the top? Here’s what Maybach has to say, just about the interior:

“The new Maybach Zeppelin is a car for connoisseurs, as is immediately apparent from its interior. Here, the luxurious leather appointments in California beige leather form a delightful contrast with the exclusive leather in deep Stromboli black that gives added impact to the shoulderline on the inside too. At the same time, the lustrous deep black tone of the leather harmonises beautifully with the exquisite piano lacquer finish of the trim elements. The precisely crafted contrasting topstitching in the dashboard and on the doors reinforces the Maybach Zeppelin’s sense of dynamism. The unusual diamond quilting pattern on the seat cushions and backrests together with the black piping gives the opulently styled seats a character all of their own. The occupants’ feet rest on genuine lambskin carpeting.” 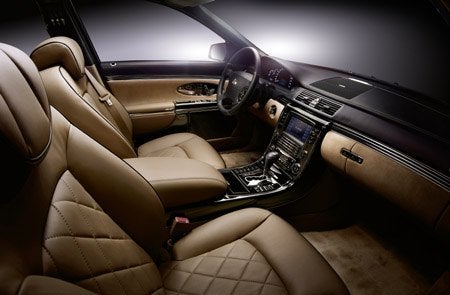 Lambskin carpeting? Dear God … the rich really are different from you and me, huh Scott?

Oh, and it doesn’t stop with dead lambs to rest your feet on either. Did you notice the perfume atomizer? Get your buyer to ring up Maybach poste haste, because they are only making 100 of these. 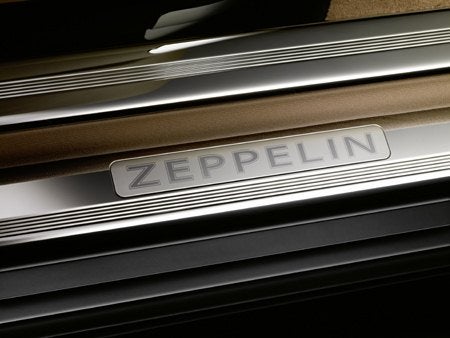