Yenko Collection To Be Auctioned at Barrett-Jackson

I’m not that big a fan of car auctions, but occasionally something interesting, if not unique, pops up. Take the Barrett-Jackson auction that will be coming up this January 11-18 in Scottsdale, Arizona. Amongst the far too common big-block this and that and customized whatever, we have FIVE vintage and historically significant Don Yenko products: three 1969 Camaros, a 1981 Turbo Z Camaro, and a rare Yenko Nova.

The most interesting is one of the 69 Camaros. It’s a Daytona Yellow Camaro, one of three existing cars built by Yenko for NHRA drag racing, with a full-on COPO 427/425 V8, 3-speed automatic transmission, Hurst shifter, etc etc etc.

Don Yenko’s name isn’t as well known these days as hit was back during the muscle car era. he was, or at least started out, as a very high volume Chevy dealer. He also had a bunch of gearhead car crazies in the shop who had no problem experimenting with what came through the roll up doors. Pretty soon he was, with the help and backing of GM, rolling out limited production runs of a whole bunch of different Chevy products.

On the drag strip or on the road course, they were not to be trifled with. They were fast, and they handled surprisingly well.

The car I’m most personally familiar with was this little beast called a Yenko Stinger. The Yenko Stinger was, of all things, a 2nd gen Chevy Corvair with a surprisingly uprated engine, and handling bits that made it, well, less of a handful, especially mid-corner. For a while there, the Yenko Stinger was dropped into the same SCCA category as bathtub Porsches and MGAs. The SCCA quickly rectified that oversight, but even after that, the Yenko Stinger could seriously worry the big boys on the right kind of course.

Don Yenko is long gone now, and few people remember his name or the cars that rolled out of his dealerships, but I remember.

No, these cars up for grabs at the upcoming Scottsdale thing aren’t exactly my style, but if I had the dough and garage space … 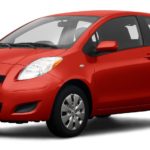