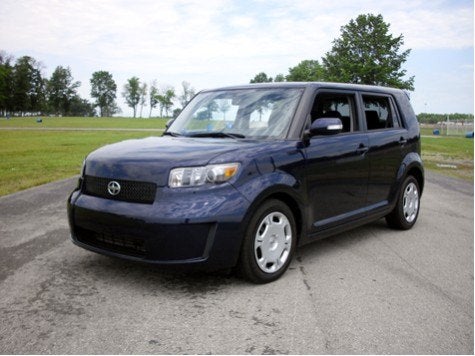 When Toyota Motor Company introduced Scion to the American car scene in 2004, it had one goal in mind: Sell inexpensive, yet funky cars to the young Generation Y driver as a way to develop their loyalty to the brand. There was the tiny xA, the toaster-shaped xB, and the cute tC. As soon as these cars started rolling off the back of the delivery truck, they rolled right into people’s garages, being a frugal, fun and reliable choice over the competition.

Shortly after the sales numbers started coming in, two very big surprises popped up: one was the most popular model in the line-up was the box-on-wheels xB; the other was the average owner age was 46, nearly twice the age Scion had originally projected.

To us car nuts, it doesn’t really matter who is buying what, but why. What makes the Scion xB hatchback, now in its second generation, such a popular choice for a car? Let us find out.

Riding on a short wheelbase of 167.4 inches and weighing a hair over 3,000 lbs., the $15,650 boxy Scion offers big space for passengers or whatever needs to be transported while offering luxuries to make the journey as comfortable as possible. It has grown quite significantly since its introduction five years ago, a foot in length and a whopping 700 lbs. to be exact, but it is still a very well-equipped car with a lot more substance and equipment.

This particular nautical blue metallic xB comes with the usual fanfare of power everything, cruise control, air conditioning, and keyless entry. Bonus features such as a 160-watt, six-speaker Pioneer stereo, iPod and auxiliary connections, tinted windows, and standard traction/stability control are included in the sticker price, most of them are usually an extra option or not available from Scion’s competition. To really spice up the xB, Scion still offers dozens of different parts to make your Scion unique, from shift knobs and interior lighting to wheels, body kits and engine modifications.

Underneath the hood is Toyota’s 2.4-liter DOHC four cylinder found in everything from the Corolla to the RAV-4. It is a terrific engine and a major step-up from the previous 1.8-liter engine, with good low-end torque for a little engine and is very willing to use all of its 158 horsepower and 162 lb. ft of torque. Providing gear selection is a five-speed manual transmission, which is equally enjoyable with its long, but positive throws and slippery movements. A four-speed automatic with Sequential manual control is available for those who don’t wish to row their own gears.

On the outside, the sheetmetal has gone from simplistic to more futuristic. The front bumper has a more distinct look, with racy-looking vents on the side. The whole front end has been whittled down and rounded off around the headlamps. With the new look, it is still instantly recognizable as Scion\’s mobile toaster oven.

The roof gets a tapered look towards toe rear by a gently rising beltline along the side, which leads to a rear end that sits a bit higher now. The rear fenders and doors have a curvy flare in them now which leads to a more protruding bumper with an oddly-placed reverse light marring an otherwise clean mixture of Japanese efficiency and American design.

This combination carries over into the interior of the xB as well, with an interior bigger than most Manhattan apartments. Front and rear passengers are offered copious amounts of room from head to toe in wide, flat seats, with the cargo area measuring a useful 21.7 cu. feet. Fold the rear seats down, and the space doubles. There’s plenty of storage too, with several bins in the dash, door panels and underneath the center armrest.

In regard to interior efficiency, the Scion’s gauge cluster sits dead center in the dash below the windshield. Below the gauges are the Pioneer head unit and two air vents. Finishing out the center console are three large rotary knobs for heat and air control as well as a raised five-speed manual transmission.

Scion fans love the simple design, but I couldn’t care less for it. For one, there is too much bland, boring plastic in front of the driver. While the debate rages whether center-mounted gauges are better or not, these are recessed deep into the dashboard, making the already small gauges even harder to see at a glance on the road. Outside of the gauges and stretch to control the sounds coming from the punchy Pioneer stereo, everything else falls into hand nicely, especially the shifter.

My time on the road with the Scion consisted of 265 miles of highway driving and rural back roads leading from Columbus to Norwalk Raceway Park and Cedar Point for the company’s Scion Exposed 2009. This was the perfect opportunity to test the car out in different situations.

On the highway, the ride in the xB was as good as it comes in an economy car. Ride was quite good, with adequate dampening over bumps and a smooth, controlled ride on the freeway. There was little wind noise considering its shape, but a good deal of tire roar from the 16-inch Goodyear RS-As made for some aggravation on the highway.

When the highway was traded for the byways, this squared-off economy car proves to be a very good handling box van. For an economy car with a higher center of gravity than anything else in its class, a torsion beam rear suspension, and its open cabin, the xB handles reasonably well. Toyota does not really produce performance-oriented vehicles, and it is no different with this hatch. However, the xB feels controllable and is very easy to push it hard.

Everything is light to the touch. The steering, brakes, clutch, and shifter all have a low-effort feel to them. This is terrific around town, with a small turning circle and a Honda S2000-like short clutch engagement, it’s easy to maneuver. However, on those back roads, it portrays a somewhat disconnect feel from the road, with no real feeling for what is going on underneath those four tire patches.

For example, the steering is light and quick, but there is no feeling, no understanding of where the car is headed. Same for the four-wheel disk brakes, which offer good initial bite upon pressing the middle pedal, but quickly falls away to nothing as there a significant gap before it feels like the rotors reconnect with the rotors.

A lot of people complained about the second-generation of their beloved xB. While it is a bit bigger, a lot heavier, and has a more eye-catching design, it follows the same trail as the older model: The xB is a reliable vehicle that offers huge space in a small package and a good driving environment. Essentially, this car is like a miniature MayTag refrigerator at an incredibly reasonable price. Combine those attributes with Scion letting owners modify their cars as they see fit and backing everything up with a warranty, this Scion fulfills its promises.