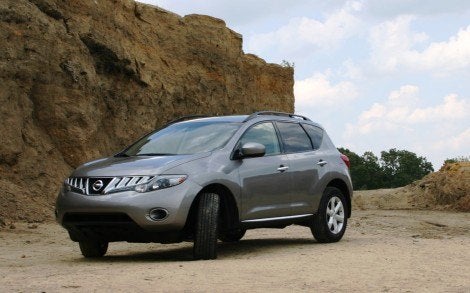 The Nissan Murano crossover, first released in 2003, was a big hit for Nissan. Practical looks, a great powertrain, and a high level of utility made it a winner that competes with the Ford Edge, Toyota Highlander, Hyundai Santa Fe, and Chevy Traverse. In 2007 as sales started to decline, Nissan pulled the Murano off the lots for 2008 and began working on an updated model for 2009 without straying too far from the winning Murano formula.

Much of the design was kept the same, but they modernized it up a bit. More curves for a muscular appearance, bigger wheels, taillights flipped on their side, and the front grille and fascia have been redesigned. As long as you’re looking at it from the rear, it’s still attractive, but turn it around and the weird grill-over-headlight awkward design makes me gag. If you like that design, great, but it’s a deal-breaker for me. Despite the strange appearance in the front, the 2009 Murano is greatly improved over the last generation.

The most significant difference in the new Murano is the interior. Instead of taking the “shove a third row in there” approach like most manufacturers, Nissan decided to make the existing seating more comfortable. Both front and rear passengers have plenty of room to stretch out, and you can still store enough in the back to go on a family vacation. Our cloth seats were comfortable, and the interior is well designed, save for a few details.

The LCD display that would otherwise house the navigation system looks awful. The big, ugly, bright orange screen displaying only audio info, time, and climate control information has a thick black stripe across the middle that doesn’t display anything. I first thought the screen was broken until I realized it’s just poor design. The instrument panel is attractive. Nissan strayed from their normal “just make everything ugly orange” philosophy and threw in some attractive white numbers against a silver background with only the lighted ring around the gauges and needles lit orange, if you’re not counting the driver info display. The dash is otherwise user-friendly; nothing too fancy, a nice symmetrical design, and easy to learn.

For me, the 2009 Nissan Murano’s drivability is its greatest asset. Steering is much like that in the 2009 Infiniti EX35 – light and easy at all speeds with excellent control. Makes sense since they’re both sitting on the Altima platform. That same base platform gives the 2009 Murano car-like handling which makes it surprisingly quick and nimble through traffic. The suspension is soft and comfortable, and at highway speeds the ride is incredible smooth. Wind and engine noise have been all but completely eliminated, making the Murano a great cruiser.

The only powertrain option for the 2009 Murano is a 265 hp 3.5-liter V6 engine mated to a Continuously Variable Transmission (CVT.) I dislike the CVT on most vehicles, but it works very well on the Murano. The monotonous engine drone normally associated with the transmission doesn’t apply here, which makes it pleasant to drive. The benefits of CVT are apparent in the Murano – smooth and quick power delivery and increased fuel economy – with none of the usual drawbacks. I’m happy that Nissan decided not to include the phony “simulated manual shift mode” in the Murano; it’s a truly pointless system. The familiar VQ35-series engine in the 2009 model got a power bump to 265 from 240 hp; a welcome change that doesn’t adversely affect fuel economy, but provides the Murano with plenty of power when needed.

Our review model – a 2009 Nissan Murano S AWD – came in at $30,920 with splash guards and a $550 Convenience Package, which includes tinted windows, a roof rail, a cargo cover, and security. No other options or packages were included on this base model, which means we didn’t get much – manual cloth seats, no sunroof, no intelligent key, no navigation. Our S model is considered the base trim, then comes the SL with fog lights, power seats, rear tinted glass, and steering wheel-mounted audio controls. Next up is the “SL with 360 degree Value Package” which adds a moonroof, intelligent key, bluetooth, and iPod integration. Last is the top-of-the-line LE which adds bigger wheels, HID headlights, a better audio system, rear-view camera, and a power liftgate. Get a base Murano with few options like ours and you’ll get a reasonably priced crossover SUV at around $30K. Option it out and you’ll be at around $45k, which is still reasonable for what you’re getting.

As far as complaints go, there aren’t too many. I already mentioned the horrid redesign of the front-end and ugly orange LCD screen inside. Otherwise, rearward visibility is sacrificed in the name of style by the C pillar, which sometimes makes it difficult maneuvering around parking lots. The Murano’s handling is good, as I mentioned before, but not as athletic as its sibling Infiniti EX35, which comes with a higher premium. It’s still worth checking out if you’re looking for luxury.

The 2009 Nissan Murano is a small but worthwhile step up from the older Murano (except for the styling,) and is a great choice among large crossovers.