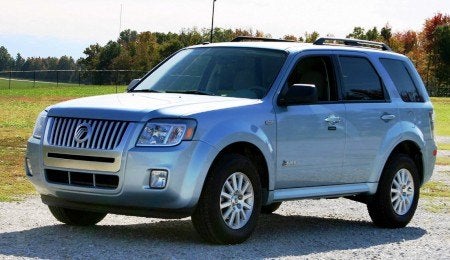 In 2004, Ford released the Escape Hybrid – the first hybrid SUV on the market. Mostly slow-selling at first, increasingly high gas prices have helped Ford sell every Escape Hybrid they can produce. 2006 marked the release of the Mercury Mariner Hybrid. Mechanically identical to the Escape, the Mariner offers buyers an alternative to the Ford model – the only difference is styling and a better interior.

New for 2009: Overall engine output is increased from 153 horsepower to 177, due to the increase in engine size from 2.3 to 2.5 liters. The engine is mounted to the same CVT transmission as last year. The once four-wheel disc brakes have now been replaced by inferior drum brakes in the rear. That one’s a mystery to me.

Buying a 2009 model now gives you more standard equipment – Ford SYNC is now standard, as is satellite radio, and steering-wheel mounted audio controls. Overall refinement and drive quality has also been increased for 2009. The design carries over from 2008.

The 2009 Mercury Mariner Hybrid is offered in front-wheel-drive (FWD) or all-wheel-drive (AWD) models, and has only one (well-equipped) trim level. The FWD Mariner starts at a hefty $29,750, while the AWD model will set you back at least $31,500. Seemingly expensive, but not so much when you consider a Nissan Altima Hybrid with a few options is priced around the same.

Included in the $4000 Hybrid Premium Package is the voice-activated navigation system, heated leather seats, a better sound system, ambient lighting, a reverse sensing system, and roof racks. The navigation system is also available as a stand-alone option for $2000. A power moon-roof is optional for $800.

You get your choice of five exterior colors (ice blue being my favorite,) but you can only have a light-colored “stone” interior. Not good for those with kids who like to spill kool-aid on the seats, or simply don’t like light interiors.

Driving characteristics in the Mariner Hybrid were impressive, both when in hybrid mode and electric-only. I liked being able to cruise at speeds up to 40 mph in electric mode only, although you still have to accelerate lightly. The “Green zone” on the tachometer is great, but could have been better at helping the driver stay in electric mode by varying more with accelerator input.

Transition from electric to hybrid mode was smooth; sometimes you couldn’t even tell the gas engine turned on if you weren’t listening. Although more powerful than last year’s model, the 2.5 liter engine is still struggles and vibrates under medium to hard acceleration. Hopefully next year’s model will be more refined.

Steering was responsive and light, the ride wasn’t too soft or too rough, and maneuverability was great. There is somewhat high wind and road noise at highway speeds, which infers poor insulation. My biggest complaint about driving was the touchy brakes, which also felt uneven and unbalanced at times.

The interior is comfortable and well laid-out. The cruise and audio buttons of the steering wheel controls are smart, and the ice-blue color of the gauge cluster is cool and modern. There is plenty of room for driver and passenger to stretch out, although the back seats could be a bit tight for taller passengers on long trips. Cargo room is impressive at 66 cubic ft. Ford did a good job hiding the hybrid batteries in a way that doesn’t take up too much interior room.

Worth noting: The navigation system seemed incomplete. Many roads had “incomplete mapping data,” and would not take us on those roads during a route, essentially taking the long way around instead. This happened in many places, and made us uncomfortable using the navigation in fear that we would be going out of our way unnecessarily.

The Mercury Mariner Hybrid is rated at 34 city, 31 hwy mpg, while we actually saw an average of 34.7 mpg – mostly highway driving. I’m still amazed at getting small car fuel economy out of an SUV. During the few times we did have to fill up, the capless fuel filling system was convenient.

I was surprised at how much I like the 2009 Mercury Mariner Hybrid. If you need the space of an SUV but are worried about the high fuel costs, the Mercury Mariner Hybrid (along with its sibling Ford Escape Hybrid,) is the best in its class. Although a bit pricey, you’re getting class-leading fuel economy, plenty of interior room, luxury features, and a comfortable ride.