Every five model years or so, manufacturers rework and freshen up their vehicles to make so-called “improvements” to their vehicles. Sometimes, these are minor, subtle, and positive. Sometimes though, vehicles may receive more of an intensive and almost shocking change. In the case of the 2009 Honda Pilot, designers certainly went farther outside the box with this overhaul than anyone could have anticipated.

Within seconds, anyone will notice how drastic the changes were on this crossover. The eyes will first notice the massive in-your-face chrome grill surrounded by larger headlights that reside in the one-inch wider front-end. That grill is accentuated by a protruding bumper with a large lower plastic “lip” and recessed fog lights. Blending in won’t be a problem with this face, especially with that great Dark Cherry Pearl paint choice. 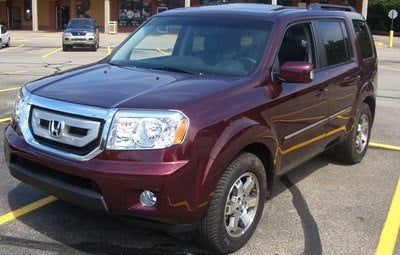 Walking around the side of the 2009 Honda Pilot, you will notice the 2.9 inch stretch in the wheelbase and overall length, as well as the extra inch added to the roof compared to last year’s model. This thing looks massive now! All the additional inches are well-proportioned and hidden by more aggressive fender flares, longer doors, and the perfect touch of chrome along with the lower door trim.

The rear end wasn’t left untouched. The back hatch and independent rear glass sit bolt up right now, with more chiseled sheet metal accenting the thick hatch release handle, which has been marred by a tacky chrome mustache sitting above the license plate area. The taillights are now perfectly rectangular, sit vertical in the body, and have loss the cheesy altezza-like treatment. The rear bumper has also been increased in size and now holds a standard Class-III trailer hitch. Finishing off the rear end is a pair of chrome tips revealing a new dual exhaust. 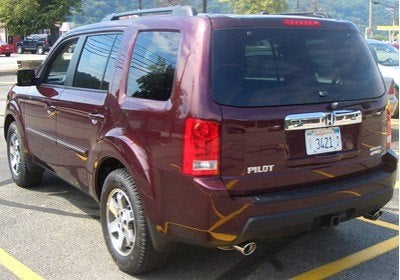 Frankly, if you can get past the gaudy chrome grill design, this new Pilot is a good-looking sport-ute. Honda has pulled away from the cute styling that was the last generation and pumped the 2009 Honda Pilot full of steroids. This is the manliest crossover. Fathers rejoice!

Open one of those wide front doors to find an equally thorough reworking of the interior. The once clean and inoffensive dashboard has been replaced by a carbon copy of that new front-end.

The radio controls no longer rest in an uninspired piece of plastic trim. They now float in a sea of light green. Below that are the buttons to control the ventilation. At the top of the dash in the Touring edition is Honda’s nine-inch Satellite-Linked Navigation System with an excellent rearview camera, while the bottom section holds the dial and seven buttons that will control the navigation system (Lesser models have a large LED display.)

The gauges have been redesigned too. The three gauges now have floating brushed aluminum bezels that control the needles. Behind them is a pure white background for each gauge, which lights up brightly at night. There’s even a nifty little information screen right below the center speedometer. 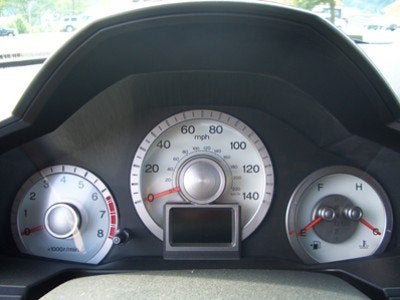 While this all sounds radical and cool, it doesn’t help the one problem that plagued the older Pilots: too many small buttons.

There is a total of 53 buttons on the center stack alone. Fifty-three! Do you have any idea how hard it is to switch from the available XM Satellite Radio to your iPod, then adjust the temperature while driving 70 mph down the highway? You have to hunt and make sure you press the correct button. And the gauges, while matching the new persona of the 2009 Honda Pilot, look more like an afterthought than anything. The white background really detracts from them.

Then there’s the navigation. It is easy to use and offers a vast array of ways to find different points of interest, from the closest gas station to where to find a Home Depot. It is controlled by a large rotating knob and a multi-directional cursor that helps you make your choices. But why change from the touchscreen? That was one thing I loved about the old model was how simple it was to have a screen where you can type in where you want to go or what you want to find. Twisting a knob back and forth spelling names becomes annoying.

By far, though, the biggest disappointment is the downgrade in materials used to make the dash. Last year’s model had a nice mixture of plastic and soft vinyl, which made touching the interior enjoyable. Now, it’s the Pacific Ocean of plastic in there. And it is knuckle-busting hard.

Not everything inside is so negative. The 2009 Honda Pilot Touring’s leather seats are comfortable, wrapped in sumptuous leather, and have excellent side bolstering. Second-row seats are equally nice, with plenty of room for three, and can slide as well as recline to maximize comfort. The third benefit the most from the added length Honda put in. The rear seats are tolerable for tall people now, although I don’t see how anyone could fit in the middle of that row. Folding and moving any of these seats is only a simple pull of a handle away.

In the back, passengers can control their own airflow controls as well as the excellent rear-seat entertainment system. What makes this system fantastic is occupants of the back two rows can watch a movie, play video games, listen to the standard six-disk CD changer or use the satellite radio through the available wireless headphones while the front row can listen to something completely separate from the back without interruption. So, the kids can watch Spongebob while the parents listen to Rush Limbaugh in peace.

Another selling point to the 2009 Honda Pilot is the overall interior space and storage available inside. In between the front two seats is a rolling desk cover. Underneath these covers are two large cup holders and a deep storage compartment. Lift up the center armrest to reveal an immense storage area that houses your cigarette adapter, MP3 connections, and a 115V two-prong outlet. How many vehicles come with that nowadays? Trunk space is ample, with 18.7 cu. ft behind the third row, 47.7 cu. ft behind the second and 87 when both rows are folded flat.

To round out this trifecta of adjustment, Honda made some serious tweaks to the chassis. The front end rides on MacPherson struts while the rear still uses a multilink setup. The Pilot has always had a stiffer ride than most, and the new front suspension is a little bit softer, which aids to a much smoother ride. The rear end is still too tight and causes some bumps to travel into the cockpit. 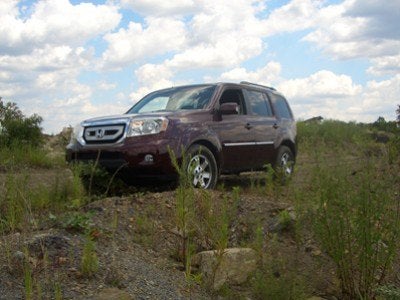 Even with the softer suspension, the Pilot is still one of the best crossovers to drive. It handles well for being 4600 lbs. There is little roll and tons of grip, even if it understeers like crazy in tight bends. The steering is a little on the vague side but has a nice, meaty weight to it. This is one big car, but it loves to play in the twisties.

If those twists are off the beaten path, the 2009 Honda Pilot can handle itself in low to medium off-road situations. Engaging the Vehicle Torque Management four-wheel-drive system (or VTM-4) locks the rear differential. It’s not a true off-roader with a low range, but combine this system with the 253 lb. ft of torque from the 3.5 liters V6 and the new Hill Start Assist system will pull you up, over, and through pretty much anything minus the Rubicon. Just be careful of the undercarriage, which will take a pounding if you don’t watch your path. 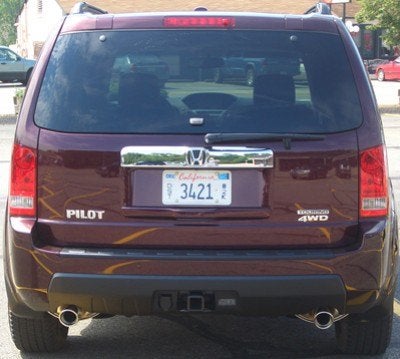 Speaking of the engine, the 24-valve 3.5 liters SOHC produces 250 horses, which is up 13 from the previous year. This engine still comes with Honda’s i-VTEC system and the company’s Variable Cylinder Management, which deactivates up to three cylinders when full engine power is not needed and helps to bump up the fuel ratings to 16 cities, 22 highway (a 1 mpg and 2 mpg increase, respectfully).

The V6 is smooth as ever and plenty powerful when you reach those higher RPMs, although you won’t be beating any Mustang at the drag strip. The five-speed automatic is very good, with unobtrusive shifts and quick downshifts when you need to pass.

Was the overhaul on the 2009 Honda Pilot worth it? In some respect, absolutely. In others, not so much. The ride is better, the looks are more aggressive, and the added room inside makes riding in the back much more tolerable. However, the changes to the dash and navigation system leave something to be desired, and that’s saying something when referring to Honda.

At the end of the day, though, this would probably be the one crossover that would make it into my garage.