When asked the age-old question “Is the glass half-empty or half-full?” I tend to lean towards the latter half of that question, trying to find the positives in live, especially in the direst of situations. If you need help feeling better about things, I am your man.

However, a certain vehicle has me a bit confused and contemplating a change to the other side of the spectrum. This car in question, the 2009 Dodge Caliber SRT4, promises to offer a quick and sporty drive for not much money. In general, it follows through on that promise, but the little hatchback has some flaws which make me think I need to add a bit more water to my glass.

What makes it even harder is the fact that Chrysler recently announced the SRT4 will be gone after this model year. 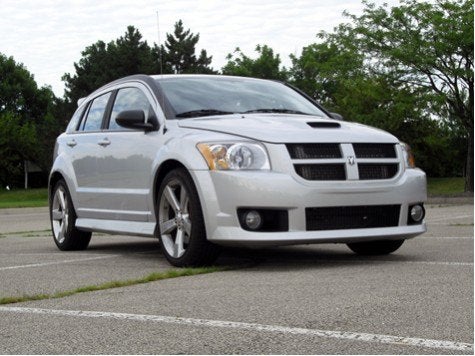 What everyone cares about, though, is Dodge carried over the beloved SRT4 moniker and everything performance-oriented in late 2007. But the Street Racing and Technology group within Chrysler tweaked this second-generation pocket rocket to perform even better.

Underneath the super-aggressive exterior of the SRT4 lies a fully-independent front-wheel-drive chassis spanning 103.7 inches (almost two less than a Neon), massive four-wheel vented disk brakes with ABS, a turbocharged 2.4-liter four cylinder engine mated to a Getrag six-speed manual transmission and 19-inch chrome wheels. The suspension is also lowered by almost an inch and is fitted with stiffer components. The force-induction, DOHC engine produces an astounding 285 horsepower, a 70 horse increase over the Neon version. And while the power is mind-blowing for a car of this size, it is simply too much for the sticky Goodyear F1 tires to handle.

After the somewhat long turbo lag, the engine pulls harder than anything this side of a V8, and creating a sound under the hood equivalent to a cement mixer. With that power, unfortunately, front-wheel torque steer is like nothing I have ever experienced, and I learned to drive on a boosted Volvo 850. I was almost afraid to get on it for fear of crossing into impending traffic. Pessimism is slowly overcoming me.

Suspension and steering tuning is a mixed bag as well. The chassis itself feels quite stiff and is capable of having a good foothold on the road thanks to the humongous tires. There’s good front-end bite when entering a corner, and initial turn-in is good. Put just a touch of power mid-corner and this steroid-induced economy car will surprise. 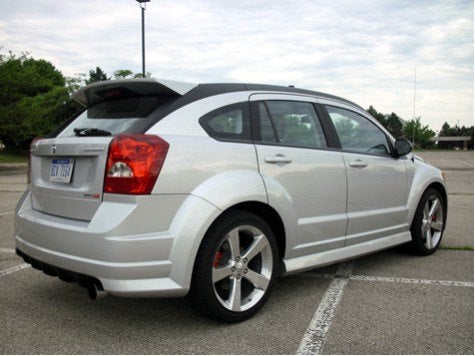 But then there is the steering, which is a touch too heavy and numb. The suspension is too softly damped, causing some roll and in certain cases, horrendous front-end bobbing. Couple those with a car that weighs over 3,100 pounds and the Caliber SRT4 is not the smoothest car to handle. Not really confidence-inspiring, but if the driver can reign in the car and use a delicate hand and foot, this can a fast little car. The “half-full” side of me does appreciate the supple ride on the freeway and not being roughed up by an overly-tuned suspension.

I may be grasping at straws right now, but do not fret. There are some positives.

The six-speed manual is good, if a bit wooly in traffic, as is the clutch pedal. The brakes are similar, with a bit of force required to use them effectively. However, they all feel incredibly rock solid and all-day reliable. After an afternoon of braking hard, hard acceleration from a stop, and overall thrashing about, the clutch nor the brakes never lost their composure and felt perfectly capable of continuing romping. Hmm, my perspective is beginning to change for the better. 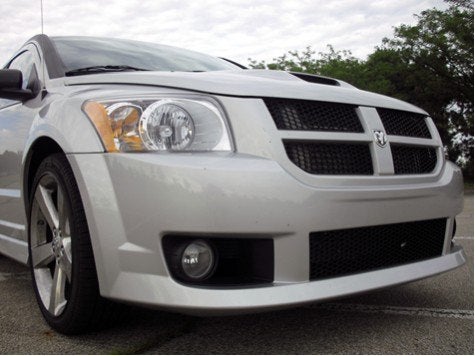 Like stated above, the exterior of the SRT4 is very American, very in-your-face. I love it. It does not have that clean, European flair of the Volkswagen GTI or the futuristic look of the new Mazdaspeed3. This domestic five-door is like the Hulk, bursting at the seams with anger and muscles, ready to tear apart any opponent that gets in its way.

From the flared arches over those massive five-spoke wheels and thick side skirts to the equally enormous intercooler visible from behind Dodge’s ubiquitous crosshair grill, there is no hiding what lies underneath the power-domed hood. The SRT4 apologies for nothing and anyone expecting it to will be disappointed.

On the inside, the aggressive theme is, sadly, not carried over. Outside of a centered tachometer and an Autometer boost gauge, it feels exactly like a base Caliber. And that is not a good thing. Even with options such as the fantastic leather and suede seats (which are worth the $695), the mirror-rattling Kicker sound system and Chrysler’s uconnect Bluetooth phone system, it feels very cheap in there, with little to tell me this isn’t just another Caliber from Budget Rent-A-Car. The center stack uses the same head unit as most other Chrysler vehicles, as are the air conditioning and heating controls, and the entire dash is mish-mash of different hard gray plastic.

Again, thankfully, there are some positive notes. One is the controls are laid out pretty cleanly and there are several different storage nooks, with two gloveboxes with a built-in refrigerator. In addition, occupants sit up in the car, giving them a good clean view outside the car with only a small blind spot over the shoulders. 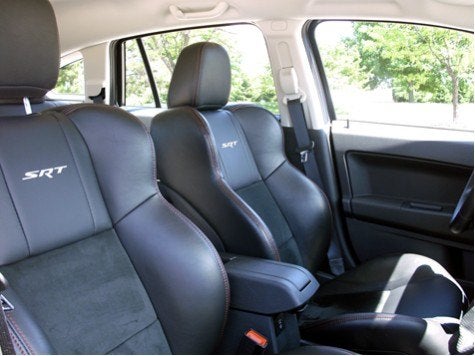 There is plenty of room in both rows of the SRT4 for your upper body, with ample rear leg and toe room for two. Leg and hip room are a bit on the tight side, as Calibers are only 68.8 inches wide. The rear storage area is also compromised by a slanted hatch, but fold down the rear seats, and spaces jumps from 18.5 cubic feet to almost SUV-like space. Just be prepared to remove the 10-inch subwoofer if you choose the Kicker system, as it hooks into the back of the seat, and is a royal pain to secure it back in there. 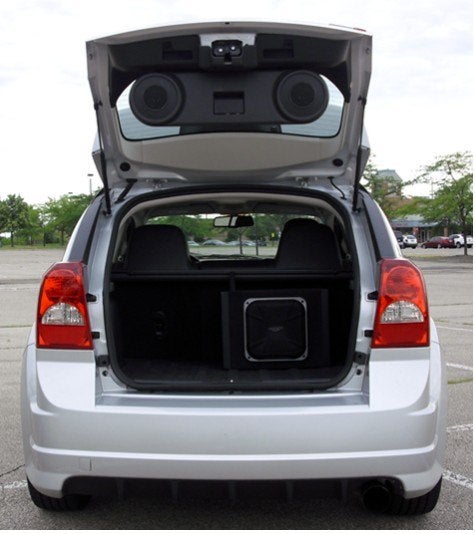 I wanted to like this car. I really did. I try to root for the home team, so to speak. This car had so much potential to be a fun and quick American-made car which could finally beat the imports. Sadly, with too much under-engineering and cost-cutting, there’s a real empty feeling at the end of the day with the Caliber SRT4. To boot, it’s not even cheap enough to make it worth while, slotting between a fully-loaded Mazdaspeed3 and a loaded GTI.

And with this model gone in 2010, the glass isn’t just half-empty. It’s bone dry. 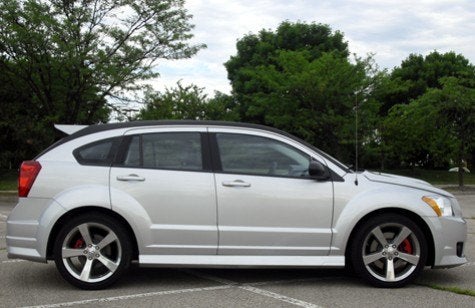 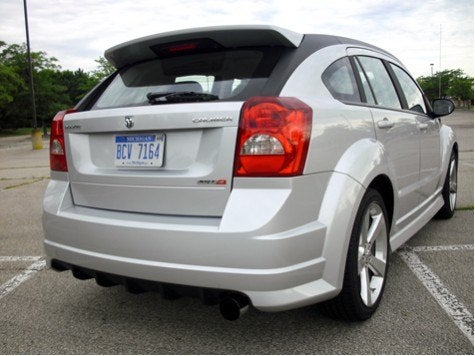 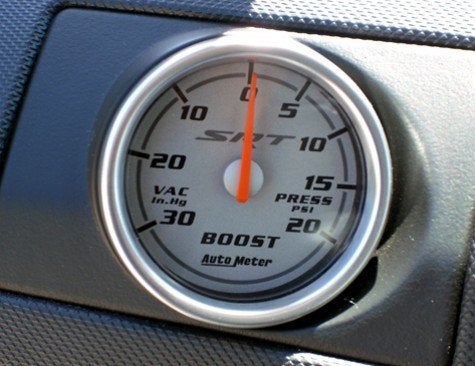