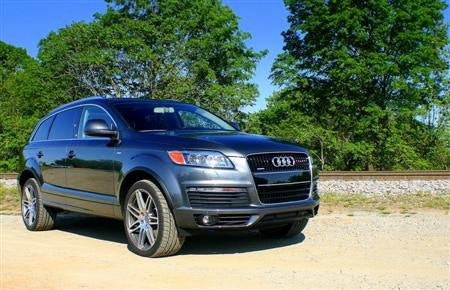 For this review, I’m going to try and tame my urge to make intermittent comments about my general distaste for large, overpriced, and overweight SUVs. I really like Audis, and my experience thus far has been that they don’t make anything that I don’t like. It couldn’t be all that bad, could it?

After all, it’s undoubtedly one of the best, if not the best-looking SUVs on the road. Put it up against it’s siblings – the Porsche Cayenne and VW Touareg – and it’s a freaking supermodel.

The 2009 Q7 is a pleasant drive, as I would expect it to be, and has your typical family-hauling SUV features and a few extras such as leather seating with heated front seats, dual-zone climate control (four-zone with the warm weather package,) bluetooth connectivity, lots of safety bits, navigation, HID headlights, 3rd row seating, a power liftgate, and Audi’s MMI interface. Many technology and luxury features come standard, and includes some features which aren’t available as an option on other SUVs.

The Q7 is bigger than some competitors, and therefore has plenty of space for cargo and passengers. The large size, however, combined with Audi’s superior build quality and solidness, adds to the weight of the vehicle, which tips the scales at over 5000 lbs. This decreases fuel economy and acceleration, which is partially remedied by the newly available 3.0-liter TDI engine which burns diesel. I hope gets the attention it deserves, and people begin to realize they can get hybrid-level fuel economy out of a diesel engine.

Despite its size, the Audi Q7 handles particularly well, and its suspension soaks up most bumps and potholes with ease. The Q7, which is classified as a large crossover SUV, is a pleasure to drive in-town in any weather, but I wouldn’t go too far off-road in it.

Our review model was a 2009 Audi Q7 3.6 Premium quattro Tiptronic S-line. The 3.6-liter V6 engine is the smaller of the two gasoline engines, and provides 280hp. We found this to be adequate for most, if a bit underpowered for the Q7’s weight of 5080 lbs. The power ran through a 6-speed automatic “Tiptronic” transmission to all four wheels. The other available engines are a 4.2-liter V8 providing 350hp, and a 225hp (369 lb-ft of torque) 3.0-liter FSI diesel engine which was just made available for 2009.

Our model was of the $5,900 “Prestige” trim, meaning it comes with the intelligent key, xenon headlights, voice control, rear view camera and sonar to assist in parking, navigation, Bose surround sound, and driver memory seat. Ours was also equipped with the optional $1,850 panorama sunroof which covers the front and rear of the vehicle, and the $1,150 warm weather package which includes four-zone climate control and window shades for the rear door windows and tailgate.

Last but not least, our Q7 tester was an S-line model, which includes bigger wheels, aluminum inlays, headlight washers, a modified front grille, S-line badging abound, a front, rear, and side body kit, and shift paddles for the 6-speed automatic. While the S-line makes it look more sporty and aggressive, I don’t really see the point, especially with the paddle shifters. Paddles aren’t going to trick you into thinking you’re driving a sports car, and ultimately serve very little purpose. Basically you’re buying a $3,000 appearance package.

While I like many things about the Q7 SUV – great looks inside and out, plenty of space, pleasant to drive, high quality, and lots of tech and luxury features – there are a few other things I didn’t like so much.

The GPS was outdated and didn’t include some roads that have been here for a couple years, and you couldn’t use the GPS while moving. This is a pet peeve of mine. The center console is very small for such a large vehicle. There is only one cup holder in view, until you fold up a flap on the center console, which can get in the way at times. There is no standard auxiliary jack for MP3 players, which is an annoyingly common problem with Audis. Finally, the climate control system was confusing, and God-help-us, we never figured out how to turn the damn thing off. An “Off” button would have really helped.

Ultimately, my biggest problem with the Q7 is that there was nothing about it that really stood out. Nothing that said “buy me instead of the Mercedes” like most Audis (other than the significantly better looks.)

Overall, the 2009 Audi Q7 is a capable people-carrier with plenty of luxury amenities, and a great in-town or long-distance cruiser. The V6 is a bit slow under acceleration, and both gas engines are thirsty; the V6 gets a combined 16 mpg, and the V8 guzzles at a rate of 15 mpg. I’m hoping the diesel version catches on here in the States. Although the numbers weren’t available at the time of this review, the increase in fuel economy will be significant.