Chances are, you know someone who owns or has owned a Toyota Corolla, or own one yourself. Think about it. This is because right now, a Corolla is sold about every 23 seconds. Since 1966, Toyota has sold around 30 million Corollas. Being the best selling car in the world, the Corolla has always provided its buyer with unmatched reliability, safety, and fuel economy.

Completely redesigned for 2009, this tenth generation Toyota Corolla shows no signs of running out of steam.

The thing about Toyotas is that they’re really good at what they do, and that’s all. No flair, no personality; many have called Toyotas simply an “appliance” – a refrigerator on wheels. But is that necessarily a bad thing? Not for most people, apparently. Most Corollas are sold to people who say “Cars are for getting you from Point A to Point B.” These are people who care about reliability over excitement, fuel economy over power, and safety over fun. I happen to not be one of those people, but I’m not quite comfortable saying I disliked the Corolla, either.

If you’ve ever had a younger sibling of the same sex, then you must understand how the Camry feels when looking at the Corolla. Exterior styling on the 2009 Corolla is a bit funky, much like a younger brother trying to mimic the style of his older brother (the Camry, in this case.) I suppose it makes sense, since Toyota was going for a younger crowd with this one.

Inside, the design holds to the same principal of Corollas of yore. Simple, no extreme lines, basic, and utilitarian. Controls are simple and well laid-out, making everything easy to use and understand immediately. The fake wood trim looked strange, but did break up the otherwise monochromatic interior.

Despite this being the tenth generation Corolla, it really doesn’t feel that much different than my friend’s 1995 Corolla, or even previous models. Toyota is staying true to what the car is, and that is one reason it’s continuing to sell as well as it is. Plus, why mess with a winning formula? Sure, it’s fancier and shinier and more modern, but the driving dynamics and interior feel haven’t changed that much. It’s a good thing.

Driving is comfortable. Smooth riding, attractive interior, and smartly placed controls. The problem with driving the Corolla is that while it’s extremely easy to drive, the steering is uncommunicative. You don’t really feel like you’re driving the car as much as you are just telling it where to go. Perhaps that’s good for some, but I like to be able to feel the road a little bit through the steering wheel, and I know I’m not alone. The problem is the overzealous power steering helping too much. 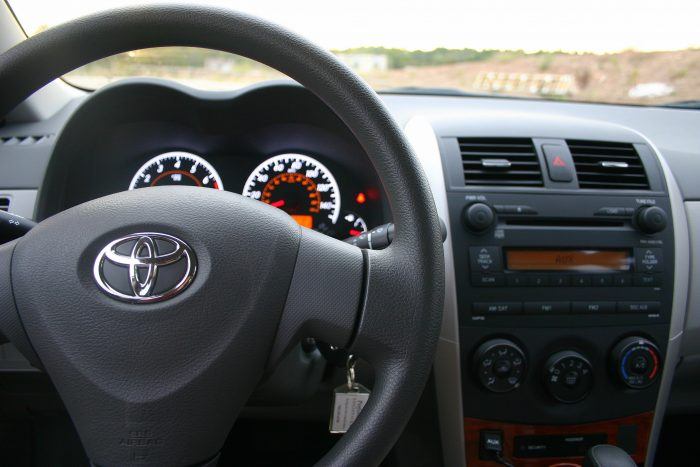 None of that matters though, because most Corolla owners are looking for one thing: fuel economy. And this is where the Corolla shines. While rated at 27 city / 35 hwy mpg, we ended up averaging 38.6 mpg for the week we had the car. This included a lot of highway driving, but that’s still significant.

So how is livability with the Corolla? I’m a tall guy (6’4″) and drove comfortably. There’s an nonrestrictive amount of space throughout the whole car and trunk, which is impressive. Toyota was smart to include a standard auxiliary jack for your MP3 player and two power outlets for your gadgets. However, the aux jack was placed to the lower left in the center dash, requiring you to feed your cable awkwardly around the shift knob. The extra storage space above the glove box was nice. The Corolla, unlike its sister car the Matrix, felt solid and well-built.

After a long drive you’re not left feeling as worn out as many small cars, except for the fact that in our Corolla XLE test car, there was no cruise control. That leads us to the next section… 2009 Toyota Corollas come with your choice of five trims: base, LE, S, XLE and XRS. All (except the XRS) come with the standard 1.8-liter four cylinder engine getting 132 horsepower and 27/35 mpg. The base model stars you off with A/C, 15-inch steel wheels, and an MP3-capable CD player. Thankfully Toyota made the auxiliary jack standard across all trims.

From there, you decide which is more important to you: sporty or luxurious.

If you decide to go with a sporty Corolla, the S trim will get you 16-inch steel wheels, foglights, an underbody spoiler, sport seats, a leather-wrapped steering wheel, and two extra stereo speakers. Move up a level from there and you step into the top-of-the-line XRS, which adds a bigger, 2.4-liter engine pushing 158 horsepower, sport suspension, 17 inch alloy wheels, a rear spoiler, cruise control, and chrome interior trim. The bigger engine in the XRS get 26 more horsepower than the standard 1.8-liter in the other trims, but also loses a significant 5 mpg average fuel economy rating.

Go the luxury route, and you first see the LE trim, which gains only power windows and locks, and body-color exterior mirrors over the base model. The XLE continues on over the LE, offering 16 inch wheels, wood grain trim, keyless entry, electroluminescent gauges, variable intermittent wipers, and a sliding center armrest. The XLE does not, however come with standard cruise control as it should. Only the XRS gets that privilege.

Toyota offers “Make it Mine” packages for the Corolla which include various options in one package. One of the options included in the “Make it Mine #3” was “Base Grade Secutity System” – Yes, their misspelling. You’d think they’d hire a copywriter before posting this stuff online. 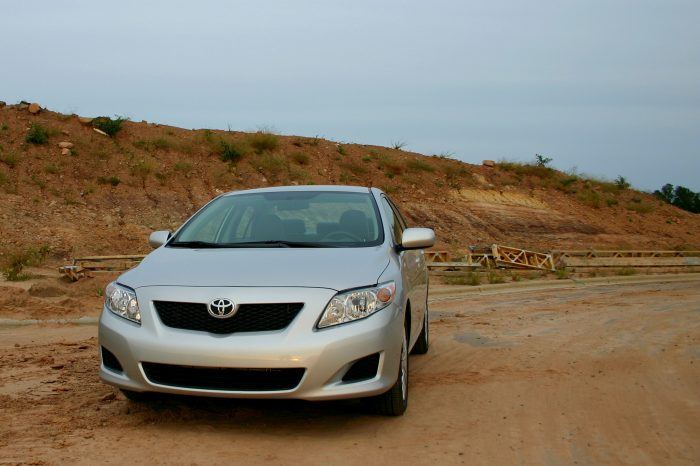 The best selling car in the world should continue to be the best selling car in the world for years to come with the new Corolla. Not that I’m particularly impressed with the steering response and road feel, and it’s not terribly exciting to drive, but the overall practicality of the car should solidify its place in the efficient, small car segment. If you don’t mind the looks of it, then the Corolla will give you plenty of interior room for its size, the 1.8-liter engine and transmission are just right for it, and it will get you where you need to go safely and reliably.

Unfortunately for Toyota, there are some very worthy contenders that provide a better alternative for many. For example, I like both the Honda Civic and Nissan Sentra better than the Corolla. Both offer a more pleasurable driving experience while still getting exceptional fuel economy. Make sure to look at the contenders in this class before you buy anything: