In the early 90’s, Nissan released an SE-R version of their popular compact car – the Sentra. Boasting 2 doors, a more powerful, highly tunable engine and other sporty upgrades, the SE-R quickly became a cult classic, and still is today.

But that’s when the Sentra was still a compact car. In 2007, Nissan gave the Sentra a badly needed upgrade. Increasing in size and features, you can now comfortably call the Sentra a mid-size sedan. So now that the Sentra is in the same segment the Altima used to be in (and is only available with 4 doors,) does the new SE-R have the same pizzazz as the original? SE-R purists would scoff at the question, but with the 177 horsepower (SE-R Spec-V buyers get 200 hp,) sport suspension, signature G-meter, sport appearance bits, and a few other details to remind you that you’re not driving an econo-box, there’s no denying that the Sentra SE-R is more than just a fuel-efficient sedan with a fancy badge on the rear.

The 2008 Nissan Sentra comes in five trim levels: 2.0, 2.0S, 2.0SL, SE-R, and SE-R Spec-V. All are front wheel drive sedans, and the first three have a modest 140 horsepower, 2.0L 4-cylinder engine, mated to a shiftless Continuously Variable Transmission (CVT) tuned for economy (a 6-speed manual is standard on the 2.0S, with the CVT optional.) For the SE-R, Nissan snagged the 2.5L 177 horsepower engine out of the larger Altima and threw it into the Sentra. A sport-tuned CVT with gimmicky paddle-shifters is the only transmission available in the SE-R. For the SE-R V-Spec, they went all out – tuning the same 2.5L 4-cylinder up to 200 horsepower, fitting it with a close-ratio 6-speed manual transmission, and adding all sorts of additional “tuner” parts and upgrades. 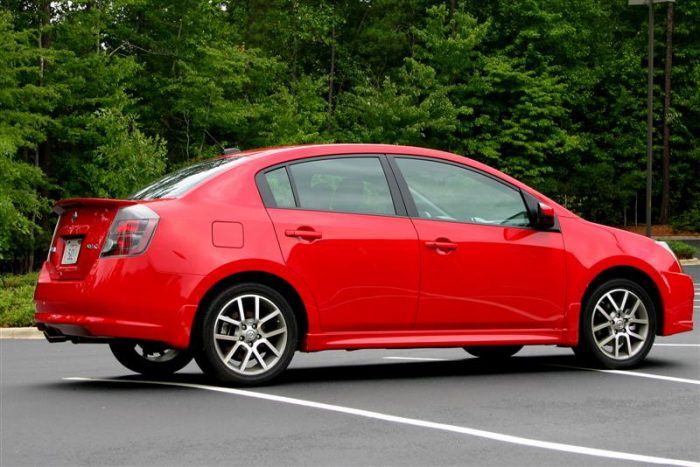 The styling of the car seems to be love-it-or-hate-it. With the tall roof-line and flat sides, some have called it a “micro van,” while others say it looks upscale and could be confused with its bigger brothers, the Altima or Maxima. Getting into the SE-R, it likes you to sit very high up. Thankfully, the vertical seat adjustment allows taller drivers to get some head room as well as lower the already high center of gravity. The positioning of the shift lever is different than most cars, but not awkward. The SE-R signature oil pressure and G-meter gauges sit high in the center console, 350Z-style. Of note: the G-meter only measures front/back Gs, meaning that you will only see the gauge move when accelerating or braking. I would have found a lateral G (side-to-side) meter more useful. I suppose this gauge is mostly for the “look what my car can do” crowd. The orange gauge lighting is ugly (red or blue would be sportier,) and the info display screen in the center console looks like it came straight from 1974.

Driving the SE-R is surprisingly fun. For its size and weight, the SE-R is impressively nimble and quick. Power is there when you need it, and the sport-tuned CVT knows when you want to go fast. The lack of shifting gears makes the engine noise tiresome after a while – a constant drone. Press the large “M” button next to the shift lever and you change into manual mode, activating the paddle-shifters. Except you’re not really shifting since it’s a CVT. It’s a good thought, but if you’re going to put a CVT in a sports car, just stick with it and don’t try to pass off this gimmicky pseudo-shifting as sporty. If you want a manual transmission, you’ll have to step up into the Spec-V. 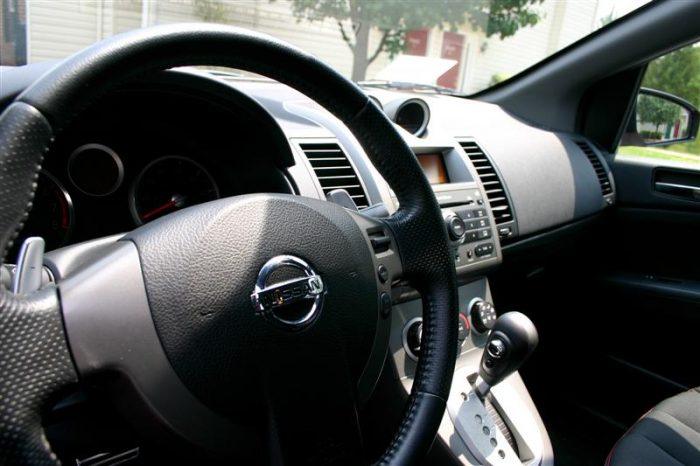 The Sentra SE-R feels lighter and lower than it is, which is a commendable task to accomplish for an otherwise spacious and economic car. We found ourselves speeding around some back roads with the car, and having fun in the process. While you do feel more body roll than I’d like, it held to the road very well, and even very sharp turns at higher speeds didn’t make me nervous.

The 2008 Nissan Sentra SE-R starts at $20,070, offering a good value for a mid-size sporty sedan that gets 30mpg on the highway, but a bit pricey for those who are in the economy mindset. If you’re looking to get even sportier with your ride, you can step up into the SE-R Spec-V for only $500 more. That $500 will get you 200 horsepower instead of 177, a close-ratio (and more fun) 6-speed manual transmission, a tighter suspension and stiffer chassis, along with a few other tweaks that make it well worth the $500 if you can live with the sportier nature of the car and slightly reduced fuel economy (21 city/29 hwy instead of 24/30.) Check out the SE-R Spec-V if you want it even sportier, but pay special attention to details, as this will be your daily driver. Note how the V-brace in the rear (open the trunk) is up against the back of the rear seats? That means you can’t move those seats down for more storage room like you can in the other Sentras. Also make sure the suspension isn’t too tight, and that the reduced fuel economy is worth it for you.

Also be sure to look at the 2.0 Sentras. They may not be as sporty or fast as the SE-R, but will still offer great fuel economy and mid-size room for a compact car price.

Some of the Nissan Sentra SE-R’s competitors worth checking out are the MazdaSpeed 3, Honda Civic Si, and the Toyota Corolla XRS. On the economy route you can also look out for the Saturn Astra, Hyundai Elantra, and the Ford Focus, although we didn’t like the Focus during our 2008 Ford Focus Review.

Overall, the Nissan Sentra SE-R is a good value for those looking for a sporty mid-size with plenty of room and good fuel economy.