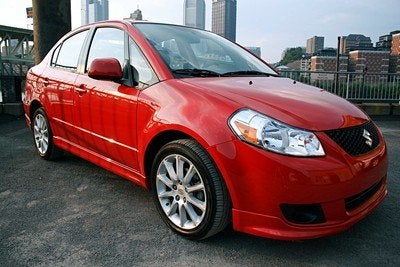 Known more for their motorcycles and all-terrain vehicles than road-going cars and trucks here in North America, Suzuki can finally stake a firm stand in the small-car market with an economy car that doesn’t actually feel like one.

The Suzuki SX4 comes in two flavors; one is an all-wheel drive four-door hatchback, the other is a four-door front-wheel drive sedan. Both offer everything you expect from a small car: small dimensions on the outside, a roomy interior and fuel-sipping mileage. However, this particular vehicle also offers you a fantastic driving experience as well as several luxury features that are found on more expensive automobiles.

The SX4 Sport sedan comes in several different trim levels, from the base Sedan that offers a 2.0-liter DOHC four-cylinder and five-speed manual transaxle, air-conditioning, four-wheel disk brakes with ABS, power everything, steering wheel controls for the radio and cruise control, and side airbags all for under $15,000. Of course, you can step up to the higher levels, such as the SX4 Sport with Convenience Package test vehicle, and get such pricey items as 17-inch wheels, aero kit, automatic climate control, heated mirrors, and a outside temperature gauge/fuel mileage computer for less the $2,000. Or choose the Touring package and reward yourself with a nine-speaker premium stereo, SmartPass keyless entry and starter, and even navigation (coming in 2009) for not much more. Inside, occupants will notice the tall roof, high seating position and excellent outward view of the SX4. The seating position is good, with firmly-padded seat and easy-to-reach controls, although certain driver may have sit closer to the dash, causing you to bend your legs, which will hurt your knees after a long drive. There is a Kareem-Abdul Jabbar-like 39.4 inches of headroom in front and 37.4 inches in back, dwarfing all others in its class except the Nissan Versa. Front passenger legroom is immense, although legroom in the back will be tight for long-legged people. The trunk is a roomy 15 cubic feet.

Everything falls into hand while sitting behind the wheel, with radio controls consisting of large and mostly well-labeled buttons for your use. Below the radio are the three knobs for the automatic climate controls, which is a cinch to use. At the top of the dash is where one can find the temperature and fuel usage display.

The Sport’s interior is made of quality materials, from the tight seams on the dash panels to the solid thunk of the doors, although a few cheap bits do make themselves known. The plastics used are rather hard, but are on par in its class. Behind the leather-wrapped steering wheel are three large gauges that have sizable numbers for quick glances and glow a dark red at night. Each gauge is ringed by a silver-colored ring, which is accented by the stereo and climate-control knobs also having their own touches of silver. That little bit helps break up the monotony of a rather dark interior.

There are a few faults to this interior. I love the touches they’ve made with adding features like the climate control and fuel display, but why skimp on a center armrest? What about adjustable lumbar support for the driver’s seat? Also, the rear seats should fold down (they don’t), and who had the audacity to approve those awful chrome pieces accenting the center console?

The exterior on the SX4 Sport has the aforementioned aero kit, which includes pronounced front and rear chin spoilers and side sill extensions. Rounding out the more aggressive looks are 10-spoke 17-inch allow wheels wrapped in Dunlop SP Sport 7000s.

Overall, the outside is good-looking and clean, if a bit ill-proportioned. The lines are clean and there are no extraneous trinkets to clutter the exterior. However, with a tall roof and a short overall length of less than 15 feet, it looks squeezed together from both ends. The big mirrors produce a big-eared effect in how far they stick out, and the rear end sits far too high. The SX4 comes off more cutesy than manly. Luckily, a drive behind the wheel can help you overlook the chic-ness on the outside.

This little Suzuki’s best attribute is its steering. The rack-and-pinion steering has been tuned almost perfectly with a nice weighty feel and perfect feedback. Tie those attributes in with 17-inch Dunlop and KYB shocks, and you’ve got a car that corners flatly, bites into the turns nicely and really engages the driver. Even the brakes work well with good response to sharp inputs.

When you are not attacking corners, though, the ride can come off as overly stiff. The SX4 won’t beat you up, but you’ll feel and hear all those bumps when going down the road from the suspension. There’s also a fair amount of road noise and wind noise that emanates through the cabin, but again, it’s no worse than the competition. One weak point that holds this car back slightly is the engine. The 2.0 liter makes 143 horsepower and 136 lb. ft of torque, so you would think it would be more than peppy. Well, it’s not.

The four-cylinder does have enough power to move out of the way of the public transit bus coming up behind you. However, full throttle sprints from a dead stop provide nothing but a deep bellow from under the hood. Quick passing ability is also a slow process. Chalk it up to the soul-sucking four-speed automatic, which is a very good one despite the dilution of performance, with nice shifts both up and down. Regardless, opt for the five-speed manual. And don’t expect good gas mileage, as I averaged just 22 mpg in my mostly city driving, which is below the EPA’s city rating on the sticker.

I was very surprised by this little Suzuki. It is a fun alternative to the more bland offerings from Chevrolet, Toyota, Kia, etc. If you’re in the market for a new compact that’s actually fun to drive, and you do not stop by your local Suzuki dealer, don’t say I didn’t tell you what you’re missing.