If the staring, pointing, and compliments from onlookers don’t give it away, then the fact that the designer of the 2009 Audi S5, Walter de’Silva, said it was “the most beautiful car I have ever designed” should tell you that this car is an official head-turner. We even had someone take a picture while stopped at a traffic light. The S5 Coupe looks both elegant and aggressive, but does it perform as well as it looks?

Audi released the S5 as a high-performance version of the A5 Coupe. Sporting a throaty 4.2 liter V8 matched to a 6-speed manual or automatic (paddle-shift) gearbox, the 2009 Audi S5 pushes out 354 horsepower good for a 0-60 MPH run in about five seconds. A ridiculous amount of traction keeps the car firmly planted to the road thanks to the permanent all-wheel-drive Quattro system standard on the S5. In a segment previously ruled by BMW, the S5 should be making the Bimmer crew nervous with its awesome performance, premium everything, and aggressive styling.

Audi gave the S5 only one trim level, with plenty of standard features: unique 19-inch alloy wheels, bi-xenon headlights with LED daytime-running lights, tri-zone (driver, passenger, rear) climate control, 8-way power leather sport seats up front, a great 10-speaker sound system with satellite radio (which could have really used a standard auxiliary input jack,) and rain-sensing windshield wipers. It also comes standard with a power sunroof, which annoyingly doesn’t open completely; it just tilts up an inch or two. Depending on who you talk to, that’s called a moonroof.

Everything else comes available as an option – The must-have Technology package runs $1,700 and includes the rear parking system with rear-view camera, adaptive (self-adjusting) headlights, and keyless ignition. The Navigation package includes a GPS, color driver info display, and the Audi Music interface. Other options include a 505-watt Bang & Olufsen premium sound system, alcantara inserts on the seats, and interior trim materials such as stainless steel, wood, and carbon fiber inlays. Additionally, some special exterior colors (like the beautiful “Sprint Blue Pearl” finish on our review model) cost anywhere from $475 to $750 extra.

Audi’s new signature front grille is instantly recognizable, and brings a muscular appeal to the front of the car. The love-them-or-hate-them LED daytime running lights running below the headlights look better in person than in pictures; a typical trait for Audi cars. The standard 19-inch alloy wheels are some of the most aggressive wheels I’ve seen, helping to bring out the true personality in the car.

The sides and rear of the S5 don’t quite match the front. It’s almost as if they were going for a supercar look for the front-end, then got bored on the rest, giving it a slightly more boring – but not at all unattractive styling.

Nighttime is where the 2009 Audi S5 really shines. The bi-xenon and LED headlamps combined with the low and wide body make it look like a supercar is pulling up, while the sleek taillights let drivers know something important just passed by. Inside, all controls on the dash and center console glow red. The optional adaptive headlights pivot slightly as you turn, making it easier for you to see around the corner. The quiet cabin and comfortable seats top it off, making a calming late-night cruise something you’ll want to do on a regular basis. Just don’t fall asleep while driving. 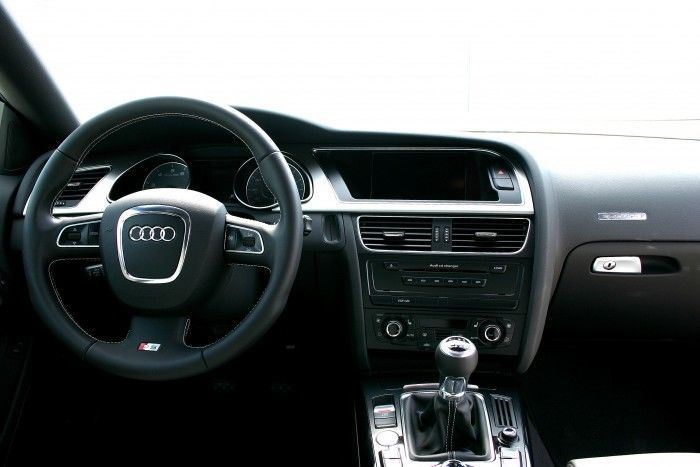 This is why we love this car. When you step into the S5, you feel instantly welcome. The sport seats hold you in comfort against the soft “silk nappa” leather. There’s plenty of room for even the tallest of drivers, and the driver-oriented cockpit makes you feel instantly in control.

The interior is beautifully designed; chrome accents in all the right places, your choice of three attractive interior trims, highly visible analog gauges with digital driver information display, and a very logical control layout. My only minor complaint about the interior design is that the CD changer area above the climate control could use some more “pizazz,” as it’s kind of bland with so much blank space around it.

When you start the car with the push-button ignition, the engine roars to life. Rev the engine a bit and the deep, throaty exhaust note is enough to send shivers down any gearhead’s spine. Once you have it moving, shifting is a breeze with a short throw on the stick, and a smooth-as-silk gearbox. Under heavy acceleration though, it was almost as if the Audi engineers decided to muffle the engine sound to a muted rumble. I would have preferred a more lively sound while driving aggressively, which would have also helped with staying further away from the redline before the rev-limiter kicks in. It’s not a car you want to take to the track. You can’t turn off the traction control, you can’t use the handbrake to lock the wheels (if you’re into that,) and it has a bit of body roll around tight corners. Away from the track, any long, open road may as well not have a speed limit. Getting into the triple digit speeds is effortless, and the Audi just wants to keep going up to its electronically controlled speed limit of 155 mph.

To sum the driving experience, this 2009 Audi S5 is simply a pleasure to drive. A perfectly implemented combination of luxurious and sporty characteristics, you can drive the S5 any distance while still having fun, but without harsh ride of many other sports cars. One thing the car isn’t, however, is nimble. It handles nicely, but you won’t get the same “attached-to-the-road” feel as you will in say, a BMW M3. But the S5 isn’t trying to be a BMW M3, after all. It’s more about enjoying the drive in comfort and convenience, while still having the ability to get lively when you want to. 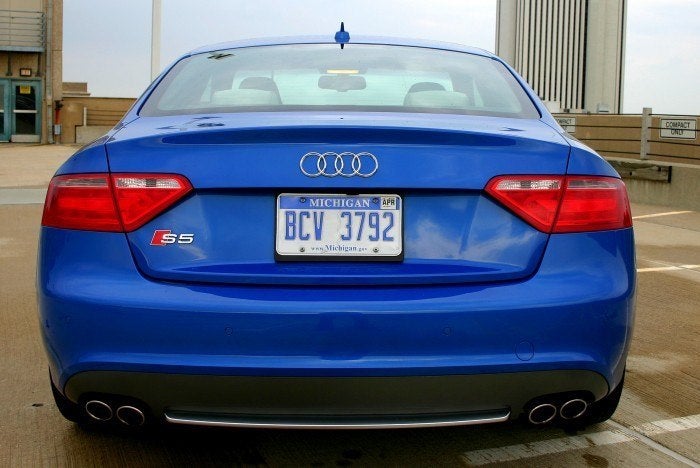 You could say that there are other cars which offer better performance at a lower price, and you’d be right. But nobody wraps the sportiness and luxury together in such a tight package as Audi. I fell in love with the 2009 Audi S5 and could easily recommend it to anybody, but not without mentioning some of its competitors for comparison. The choices available in this segment are purely subjective. Before you buy, check out the BMW M3 Coupe. I actually didn’t like the M3 quite as much as the S5, but I know some people would prefer the Bimmer.