Ground Zero RX-7: A Gorilla in a Tuxedo 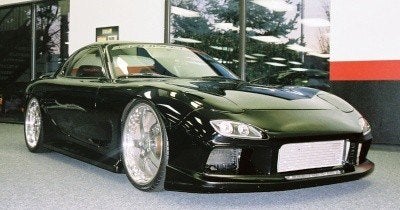 Question: How do you get a Gorilla into a tuxedo? Well you do what Tamer Kekhia and his boys did at Ground Zero Motor Sport in Tigard, Oregon. They started with a small light sports car and stuffed in enough power to send even the most uptight, rigid man into bouts of uncontrolled school girlesque giggling. Tamer, himself being no stranger to the speed thing, started out with some crazy street bikes to get his rushes of adrenaline. He then decided that he wanted that rush on four wheels and thought that the FD3S RX-7 platform would work out for him. Brian Friend, one of the crew at Ground Zero tells me, \”Tamer is crazy into bikes, so he wanted a car to run with the big bore bikes.\” He goes on to say, \”even though the car is pretty light, it\’s built for high speed pulls. You know from like 70 to whatever.\” Yes please!

Tamer and the team at Ground Zero started with the relatively stock twin turbo 93 RX-7 and quickly got to work turning it into the monster you see here before you. They ditched the original twin turbo 13b and started with a fresh 13b that got some porting work to accommodate some big horsepower. Brian and the guys then fabricated equal length lower intake manifolds as well as the polished aluminum piping that connects the single Garret GT42R ball bearing turbo. The big old Garret is cramming 36 lbs of boost through a Greddy intercooler that then screams the cooled compressed charge into the Wankle producing 676 hp and 466 pounds of torque at the wheels. In a car that weighs less than 3,000 pounds, that\’s just plain freaking brutal! The RX-7 uses a Greddy PRofec B boost controller to monitor the bad boy as well as a Turbo Excesses blow off valve to keep all of that boost in check. When you get that much boost blowing into an engine, you will need to ramp up fuel delivery as well so that the engine doesn’t go lean and self-destruct. To handle this task the team contacted Precision Turbo for a pair of their 850 cc primary injectors, and while they were at it, picked up a set of four 1600 cc for the secondaries to really get the Gorilla to roar. All of that spent fuel and boost then howls it\’s way through a full four-inch exhaust. To address the rest of the drive train, the team decided that a stock 5-speed tranny was up to the task of directing all that rage. They went with a single plate clutch from RX-7.com; Tamer reports that it has plenty of clamp to get all that power to the ground. They also taped RX-7.com to supply them with a little more adjustability in the form of a set of their adjustable control arms for the independent rear suspension. To maximize all of that adjustability they went with HKS Hyperman coil overs on all four corners to get the car down on the ground where it belongs. Hotchkis then followed that up with a set of their sway bars to keep the car level when Tamer hammers the car through the twisties.

Knowing the car was going to make that much power and still be able to corner like it was on rails, Tamer knew he would need to put some serious rubber to the ground. To do this the RX got some custom bling from i Forged, a set of Aeros from their Formula Series. He then went ahead and wrapped them with Pirelli P Zero rubber to plant the car in the corners. 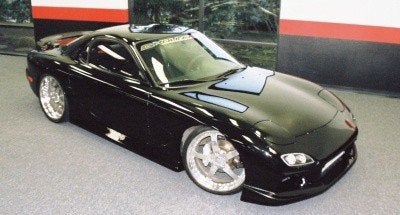 To make the brute as pretty as it is fast the team wanted to do something subtle, so they used one of Version Selects body kits for the RX-7. The team fitted the sides and front bumper in house and them sent the whole car out to be painted in the stock black. The paint on the car looks like you could put your hand right through it, and it also shows off the laser straight body panels. The team says that the car is not quite done yet as they plan to add a carbon fiber diffuser later, probably by the time that you read this.

Tamer kept the interior simple and functional with an upgraded steering wheel and a Kenwood CD player to blast the tunes. To finish off the interior, and keep Tamers butt planted, the guys got some seats from Recarro. The seats are also in black to match the rest of the beast. 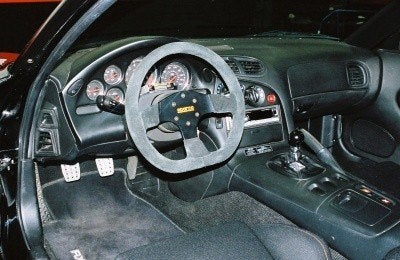 Well there you have it, a gorilla wearing a tuxedo. Power, style, and function all wrapped up in one beautiful package. And the best part of this story is the car is driven how it is meant to be driven, hard. No trailer queens here, Tamer actually takes this car out and puts it through its paces on a regular basis. Which, with a car built to this level, is rare to see. So let this be a calling to all of you with super bitchin’ cars like Tamers. Get out there and drive your works of art. Let others admire their beauty, and fear their power. But consider yourself warned. If you are out cruising one night and you see this beast, don\’t poke at the Gorilla and try to race him. It is quite possible that he will rip your arms off and beat you with them.