The new-for-2008 Nissan Altima Coupe has often been called the “Poor-man’s Infiniti G37.” And rightfully so. Nissan’s only current front-wheel-drive coupe reminds one of the G37’s sexy lines and sporty stance while providing a practical front-wheel-drive layout and decent fuel economy at a reasonable price.

Nissan fitted the Altima Coupe with either a practical 2.5L 4-cylinder engine producing 175 horsepower (2.5 S) or a sporty 3.5L V6 with 270 horsepower (3.5 SE.) Both models receive a 6-speed manual or smooth Continuously Variable Transmission, which surprisingly doesn’t cost more than the manual. 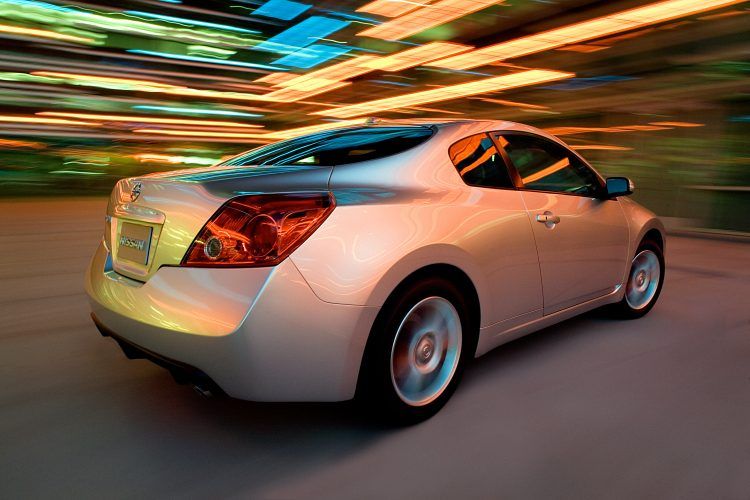 Nissan designed the Altima Coupe the right way: completely solitary from its Sedan counterpart. The Coupe rides on the same platform as the Sedan, but the only body panel shared with it is the hood. The Coupe is shorter, lower, and sexier than the Sedan and should be considered a different model, meant for a different buyer. “We wanted the coupe to be a vehicle in its own right and not a two-door clone of the sedan, and I think we hit that sweet spot,” says John Curl, Regional Product Manager for the Altima.

On the outside, the Altima Coupe resembles the previously mentioned G35/37 Coupe in many ways, with its sexy lines and muscular stance. The only negative things that could be said about the styling are the bulbous rear-end, large holes in the front honeycomb grille, and the chrome “mustache” on the front grille, which looks weird on any color except silver.

The interior styling isn’t as pretty or high-tech as some of its rival’s (such as the Honda Accord Coupe,) but it is more basic and overall easier to use if that’s what you’re into. The four-spoke steering wheel looks and feels nice, the center dash is basic, and the buttons are logically placed. It’s attractive in its own right and will appeal to drivers who like the basics and like to focus on the important things. You know, like driving.

Space can be a bit cramped, but not to the point of being uncomfortable. Being 6’4″ tall, I’m quick to pull the trigger on the head- and leg-room, but the Altima Coupe didn’t fall short there either. Drivers have plenty of room and should be comfy in the low-sitting cockpit. The minimal trunk space (only 7.4 cubic feet) proved limiting, but at least the rear seats fold down. It not like anyone can sit back there anyway. 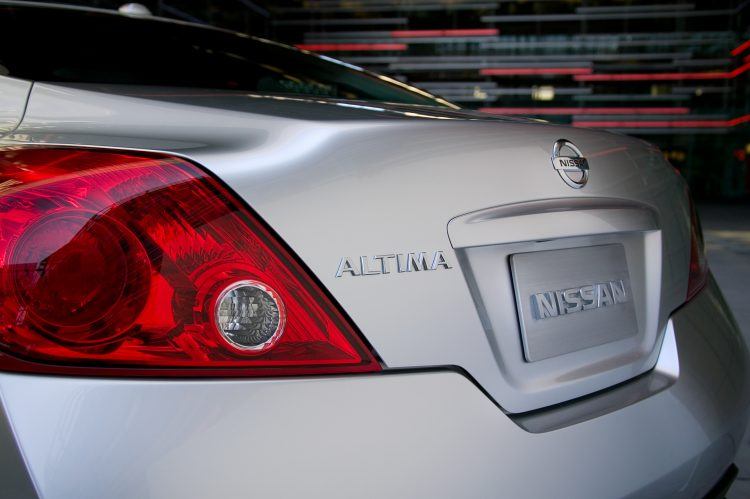 Here’s where the 2008 Nissan Altima Coupe outshines its rivals and proves itself to be a bargain, dollars-for-performance. The 270 horsepower 3.5L V6 is powerful, responsive, and exceedingly fun to drive. No need to burn rubber, but turning off the traction control in this car is like giving an already hyperactive 12-year-old kid a couple Red Bulls. It becomes noticeably more responsive, and you feel more connected as a driver.

The sport suspension of the 3.5 SE allows it to corner hard with minimal body roll and take windy back roads very well. The CVT is smart and almost always right where you want it to be. In fact, I haven’t yet driven a better CVT than the one equipped in the Altima.

It didn’t have the usual annoying engine drone typical in these transmissions, and the power was always right there when needed. Unfortunately, we didn’t get a chance to drive the optional 6-speed manual.

As I said above, the Altima’s interior is very comfortable for the driver and front-seat passenger. The almost excessive bolstering of the seats holds you in place while taking hard turns, and even tall and/or wide drivers have plenty of room. 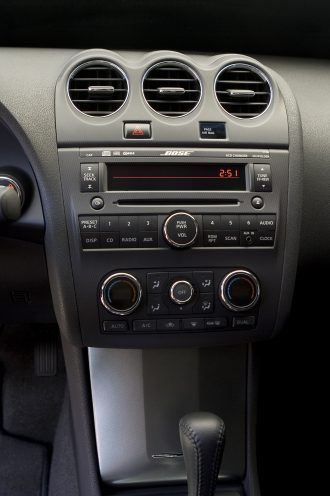 The problem is that I would only want about half of those options, and to get them, I still have to pay for the ones that I don’t want. There are no individual options aside from the $600 VDC (Vehicle Dynamic Control) and $2,000 Technology Package (GPS and rear-view camera,) and you must have the Premium package to even get it. Nissan really should make some features of the Premium package optional.

The 2008 Nissan Altima Coupe 2.5 S has an optional moonroof and fog lights, then it’s the same thing: a $1,300 Convenience Package and a $3,800 Premium Package which both include an overflow of options; some of which you want, some you don’t.

Considering how sporty the 3.5 Coupe already is, I start to salivate thinking about a (hopefully) upcoming Altima Coupe SE-R. Toss in the 350Z’s 306 horsepower V6, a sportier suspension, tuned exhaust, sexier wheels, body trim, and darkened taillights, and we’ve got ourselves a bad-ass FWD sport coupe.

The Nissan Altima’s main competitor is the Honda Accord. Read our 2008 Honda Accord Coupe review, then go look at one yourself. The Altima is a better driver’s car, but the Accord has a fancier (although more confusing) interior and is still a very nice ride.

Other direct competitors include the Pontiac G6 GTP and Mitsubishi Eclipse GT. If you don’t mind stepping into the rear-wheel-drive and less practical side, take a look at the Mazda RX-8, Nissan 350Z, and Ford Mustang. They’ll offer a more sporty driving experience, but you’ll have to sacrifice everyday drivability, practicality, and fuel economy. 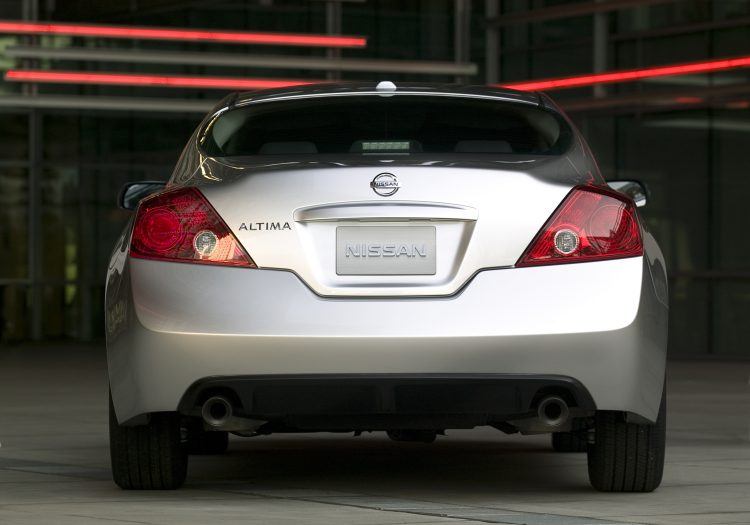 The 2008 Nissan Altima Coupe, simply put, is a driver’s car. And a damn good one at that. Exceptionally good-looking inside and out, more than enough power, responsive steering, fun to drive, excellent fit and finish, and affordable. What more could you ask for?

Well, a decent trunk would be nice. So would space enough in the back for people who happen to have legs. I realize it’s a sports coupe, but it’s still mid-size and should have more space than it does.

For the everyday commuter and weekend road-carver, the Altima fares up nicely and fills a gap between the raw-racer 350Z and the family-hauler Altima Sedan. We loved the Altima Coupe, and I would consider buying one myself if I were in the market.