The Honda Accord is the gold standard in family sedans. In this review of the 2008 Honda Accord EX-L V6, I want to find out if the radical changes were able to further improve the merits of the old model.

When we think about mainstream family sedans, what comes to mind? Reliability? Safety? Style? Usually, the first two are the answers people come up with, and rightly so since the main goal of these vehicles is to start every morning and protect the family inside. However, automakers are now trying hard to infuse some “style” into their popular products.

Take the 2008 Honda Accord EX-L with Navigation four-door sedan. Only a few years ago, this car was simple and sedate, with a face that was easily lost in the crowd. When the Accord was completely overhauled last year, Honda decided to change their previous ways and go for something a little more noticeable. 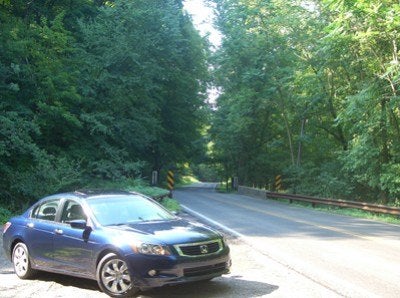 As with the 2009 Honda Pilot tested two weeks ago, you can instantly see there have been major alterations to this sedan when compared with the previous model. For one, the Accord has grown significantly in all directions and is now considered a full-size vehicle, similar to the Mercury Grand Marquis and Toyota Avalon.

To match the increase in size, the sheet metal has also been turned up a notch. The Accord now has a long sloping hood that leads to a very pronounced snout. The new rectangular chrome grill is accented by two large, protruding headlamps. Below them are smaller integrated foglights.

Down the side, designers again have hidden the added length well by adding larger doors, adding a styling crease from the front fender back to the taillights, and pulling both the tail- and headlamps back into the side view. The rear end carries the crease along the rounded-off trunk lid that connects the new, angular rear lamps.

The interior of the 2008 Honda Accord EX-L has been as thoroughly reworked as the exterior. An entire new dash was developed. On the top center of the dash is a new 7-inch infotainment center and navigation system. Below that is a new layout for the controls for the radio, ventilation, and navigation. The radio controls are dead center, while the HVAC buttons are on either side: Dropdown an inch and the rotary control with large buttons to control the redesigned navigation.

Of course, being a Honda, everything is built with the highest quality of materials. The feel of the leather-wrapped steering wheel to the tight seams of the incredible plastics, everything just feels sensational. Every car manufacturer on the planet needs to use this car as a benchmark.

With the elongated chassis, the interior is much more airy. Riders can stretch out in any seating position without complaint. All seats are wrapped in sumptuous leather and initially come off as too firm but become comfortable on long trips. The trunk room is excellent at 14 cubic feet, although the floor is a bit shallow.

Motivation is provided by a slightly tweaked 3.5 liter SOHC V6. It, of course, has all the techno-goodies that Honda is known for, such as i-VTEC and Variable Cylinder Management (which cuts cylinders under no loads or cruising speeds). All 271 horses produce a ferocious leap in acceleration in the higher rev range, but there is enough grunt down low to maneuver around buses and bikes caught in your way going into work. And it even returns an impressive 22 mpg in city driving.

Transmission choices remain singular, with Honda’s requisite five-speed automatic. Do I need to remind you how good Honda transmissions are? This one is no different.

How Does it Drive? Another strong point for the 2008 Honda Accord EX-L is the way it drives, which has always leaned towards the more enjoyable side of the segment. The older Accords were crisp handlers, and the new one has certainly improved on that with the newest edition.

Even though it has become larger in all aspects (including weight), this big four-door will not hold you back on the roads that lead off the beaten path. There is a smaller diameter steering wheel now instead of something out of a school bus. Couple the new wheel with the shorter ratio steering and a fluid, well-weighted system, the new 2008 Honda Accord feels much quicker to react to your movements than in the past. 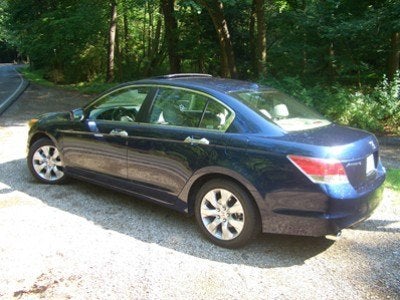 The new, longer body also helps to keep body motions in check, with better tuning on ride characteristics as well as body lean. Head into a corner, and the double wishbones up front and multilink suspension in the rear help plant the sedan’s 17-inch Michelins to the road with little fuss. Body roll is kept in check while understeer is kept to a minimum.

And yet, with all these new changes, there are some things that I am not a big fan of. For one, the looks are hit-or-miss. Pictures really do not do this car any justice. I am becoming fond of the new front styling, but designers just gave up on the rear end. Looks like someone went out late at night, cut the rear end of a Saturn L-series, and glued an “H” on the trunk lid. Also, whoever thought chrome door handles would work should be fired.

Then there is the interior, with its mishmashes of buttons. As stated previously, the interior quality is perfect, but why a million buttons? You will hunt every single time you want to change a radio station or turn down the temperature. And even with a voice command system integrated into the 2008 Honda Accord, you won’t remember half of the command to control any of it. Also, please go back to a touchscreen navigation screen. 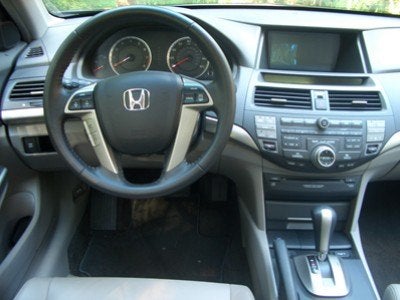 Even with all the advancements to the suspension too, it is still one of the worst riding sedans in the segment. The engineers have not found that proper balance between a taut suspension and ride comfort, and the new 2008 Accord is still far too jittery for my liking. Every pothole, expansion joint, tar strip, leaf, whatever you may run over, will make its way through the chassis and up your backside. It may be less punishing before, but this big car will still thump its way over the road.

Honda still does everything right. It makes vehicles that are clean, well-made driver’s vehicles. The new 2008 Honda Accord has taken a large step forward, but was it too much?