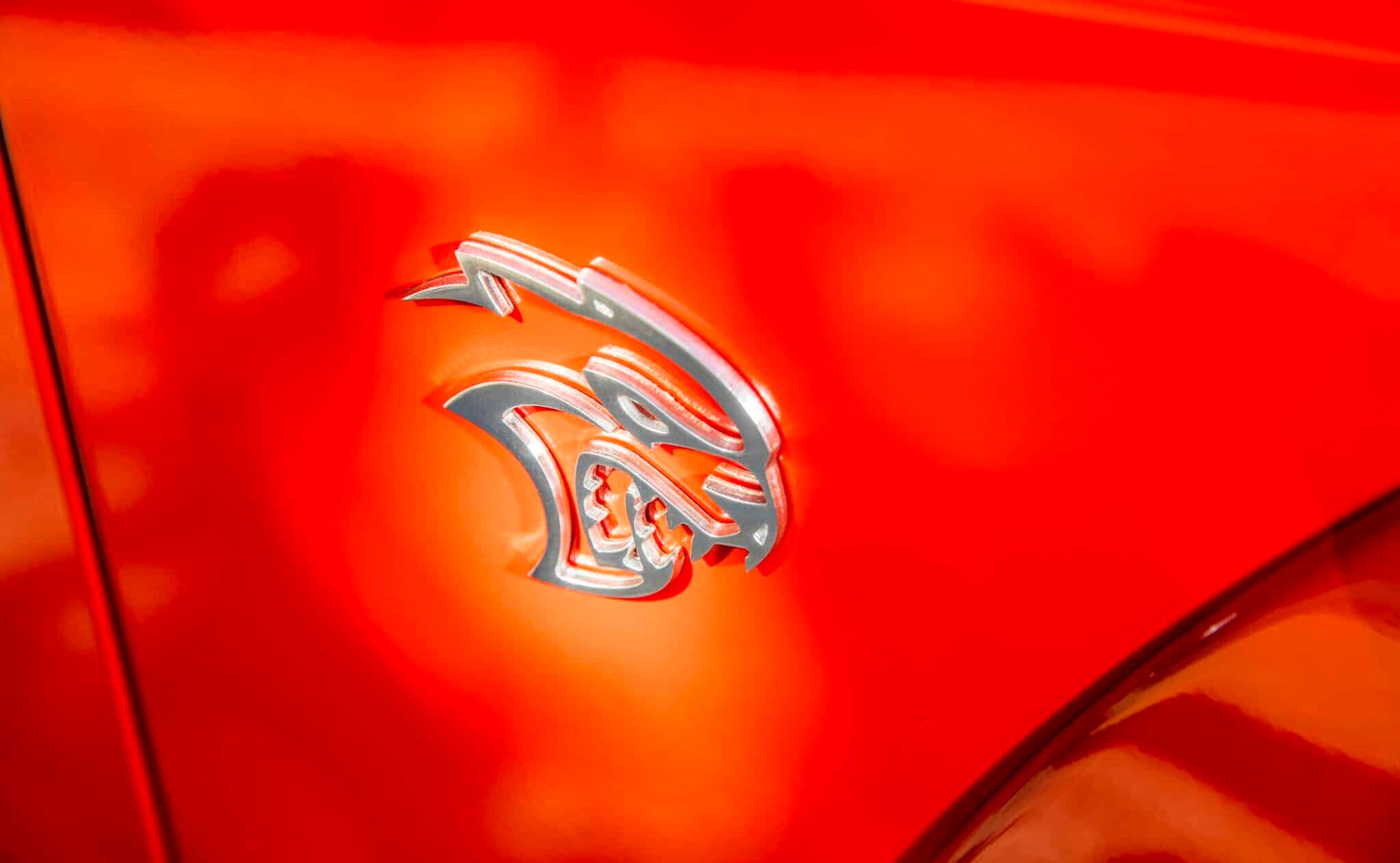 No Tricks Only Treats: These 13 Vehicles Were Made For Halloween!

Our selection criteria for this list of wicked rides is pretty straightforward. First, the vehicles must have enhanced capabilities beyond a typical daily driver (although there are two sleepers at the end). And second, they had to be actual, real vehicles. This, admittedly, eliminates a few noteworthy terror mobiles, like the 1941 Chevy COE from Jeepers Creepers with the menacing horn or Stuntman Mike’s 1970 Nova from Death Proof. It also disqualified Herbie, the supposed Love Bug (a car that cute we can assume has ulterior motives).

The Dodge Challenger SRT Demon is the first street-legal car to do a front-wheel lift, as certified by Guinness World Records. If you do a monster mash on the gas, more than one ton (2,500 lbs.) is transferred from the Challenger SRT Demon’s front wheels to the rear ones at launch. The upgraded torque converter for the TorqueFlite 8HP90 eight-speed automatic increases torque multiplication by 18 percent.

The supercharged 6.2-liter Hemi V8 features a deep-skirt cast iron block, aluminum alloy heads, and the now famous hemispherical combustion chambers. With 100 octane fuel in the tank, the engine pumps out 840 horsepower (6,300 rpm) and 770 lb-ft. of torque (4,500 rpm). The Challenger SRT Demon also has the largest functional hood scoop of any production car at 45.2 square inches. During a quarter-mile run, the Hemi engine ingests the lung capacity of 816 humans.

Pack Attack: There are many honorable mentions in both the Challenger and Charger lineup if you want to scare the neighbors over Halloween. The Black Ghost Challenger, a modern interpretation of the elusive 1970 Challenger owned by Detroiter Godfrey Qualls, would be great for cruising the streets on Halloween night. You could also get freaky with one of the Hemi Orange and SRT Black appearance packages.

The Ford Explorer was outright worthless against the T-Rex in the original Jurassic Park, but the F-150 Raptor R is cut from a different cloth. Best hold onto your butts because Ford earnestly took Jeff Goldblum’s “must go faster” advice, stuffing a 5.2-liter supercharged V8 from the Shelby GT500 under the Raptor R’s hood. Affectionately called “Predator” by Ford, the engine thumps out 700 horsepower and 640 lb-ft. of torque.

If Dennis Nedry had the Raptor R, he would have blown past the Dilophosaurus and smuggled that dino DNA off Isla Nublar and into Dodgson’s hands (we got Dodgson here!).

Point of Interest: Paleontologists found evidence in 2007 to suggest Velociraptors had feathers, although likely not for flying. Instead, the feathers would have helped regulate body temperature, attract a mate, and even generate thrust while running after prey.

The Ford Raptor might be the GOAT, but in Jurassic Park, the T-Rex did, in fact, eat the goat. Ram put the TRX on an all-protein diet and has built a worthy competitor to stand against the long-running Raptor. The engineering behind the TRX, from the powertrain to the suspension and chassis, is beyond cool. During the 2021 Motor Bella show at the M1 Concourse in Pontiac, Michigan, the Ram TRX blew us away during an off-roading demonstration.

Under the hood of the Ram TRX is a 6.2-liter supercharged Hemi with 702 horsepower and 650 lb-ft. of torque. The TRX employs an electronic locking rear differential and a Dana 60 rear axle (3.55 ratio) featuring full-floating hubs and an axle-hop damper. Additionally, the off-road driving algorithms are programmed to take full advantage of the TRX’s 2.64:1 low-range gear ratio.

Writing for Rolling Stone in December 1977, John Milward concluded that Blue Öyster Cult’s Spectres record was “hard as nails but as sweet as cream.” The most recognizable song on the 10-track album is arguably Godzilla, which didn’t actually chart in the late 1970s, despite its continued popularity today on rock radio. Although Milward seemed to have mixed feelings overall about the song, he did praise the “monstrous bravado” behind the guitar riffs. BOC’s lyrics are literal, which makes the song either ridiculous or awesome or perhaps ridiculously awesome.

Like the Long Island rockers, Nissan has also taken inspiration from Japanese film, manufacturing their own version of a Kaiju in the ever-powerful GT-R. The car’s Godzilla nickname is well-deserved too. In its NISMO skin, the GT-R stomps the pavement with 600 horsepower and 481 lb-ft. of torque, courtesy of a VR38DETT 3.8-liter twin-turbo V6 and ATTESA E-TS all-wheel drive system. Engineers from Nissan and Brembo worked on the braking system together, which is modeled after Formula 1 systems.

Fun Fact: The GT-R’s engine is hand-assembled in a special clean room by skilled technicians known as Takumi craftsmen. An aluminum plate with their signature is affixed to the front of the engine.

Ford makes our list again with an entry from its Lincoln division. Unlike the F-150 Raptor R with its beastly spec sheet, the MKT stands out for a different reason. It looks like a hearse. And even more fitting since the MKT is pushing up daisies in the automotive graveyard as of 2019.

However, the MKT did feature a THX sound system. So if you go full bore with Halloween decorations, find a used MKT and park it on your front lawn for all the trick-or-treaters to admire. Unleash some Black Sabbath, Rob Zombie, or Motörhead through the THX stereo to really get the whole neighborhood in the mood.

The 2023 BMW M4 CSL is only the third in the automaker’s history to carry the Coupe Sport Leichtbau (CSL) designation. Limited to just 1,000 units, the two-seat M4 CSL can leave just about anything in the dust with its turbocharged inline-six, track-tuned suspension, and strategic carbon fiber placements to reduce weight. With development engineer Jörg Weidinger at the helm, the M4 CSL completed a lap of the Nordschleife in 7 minutes and 20.20 seconds (7:20.2).

We are hoping for a suspenseful, graphic novel-type superhero movie in the near future where the M4 CSL has a starring role. Something like The Crow, Sin City, The Spirit, Samaritan, or I, Frankenstein would be perfect.

This World War Z, Dawn of the Dead cruiser has two optional engines: a 6.4-liter V8 with 500 horsepower and a 6.2-liter V8 with 1,000 horsepower. If those look familiar, it’s because they are sourced from the Dodge Charger and Challenger lineup, the latter engine being from the Challenger SRT Demon.

When fighting through the hordes, engage the magnetic deadbolts and electrified door handles. As the zombies grab on, they will be in for a shock. After that, deploy the Smoke Screen feature to confuse the zombies or blind them into submission with the TANK’s powerful lights. If that doesn’t work, just hit the gas and mow them down. The TANK is protected by ballistics armor and kevlar.

Fun Fact: The average oil change for a Bugatti can run upwards of $25,000.

The Aston Martin DBS Superleggera’s front grille mirrors a honeycomb, not by happenstance. Designers took inspiration from nature and found it among the bees. The DBS Superleggera is powered by a 5.2-liter twin-turbo V12, cranking out 700 plus horsepower and 650 lb-ft. of torque.

The 2015 flick Stung shows what happens when giant killer wasps descend on ritzy garden parties. But you don’t have to worry because you drove your DBS Superleggera to the event. When the stingin’ starts, jump in that bad boy and outrun those ravenous, blood-thirsty hornets.

Another “stinger” in its own right, the Fiat 124 Spider lives up to that scorpion insignia with a turbo-four sending 164 horsepower to the rear wheels. Toss in the Bilstein sport suspension, mechanical limited-slip differential, and Brembo brakes, and the 124 Spider Abarth has treats galore for your Halloween tastes.

Although Transformers isn’t a horror franchise – despite the Decepticons being scary – the Fiat 124 Spider would make an awesome Autobot. Characters like Prowl, Cliffjumper, or Sunstreaker come to mind. Maybe Scorponok has an epiphany, leaves the Decepticons, and imprints as an Autobot on a Fiat 124 Spider.

As the real baddie of the bees, getting stung is even more painful from an automaker nobody expects! During its development, Kia engineers put the Stinger through nearly 500 laps of high-intensity driving around the Nürburgring, the equivalent of about 6,200 miles. The foundation for Kia’s Gran Turismo car is a stiff, NVH-resistant chassis comprised of 55 percent advanced high-strength steel. The 3.3-liter twin-turbo V6 Lambda II engine of the Stinger GT2 packs 368 horsepower and 376 lb-ft. of torque.

The Audi S5 Sportback, BMW 440i Gran Coupe, and Infiniti Q50 should mind the hair on the back of their necks. If it stands up, it’s a Kia Stinger on their six.

So you sold your soul. It’s not that bad. It’s like The Body Snatchers, kinda. Once you’ve been “snatched,” you don’t exactly know it. You still walk around and stuff. Just without emotion. Like Adam Sandler in Click, minus the angelic Christopher Walken to mentor you.

Fun Fact: I love minivans, and I make a compelling case (I think anyway) for them on the Cars Yeah podcast with Mark Greene!

At first glance, there is nothing scary about Toyota’s fuel sipper but consider this: while we should fear mountain lions, it’s the domesticated cats that subtly flop down in our path with the intention to trip us in our own home. Never trust a Prius. You have been warned.