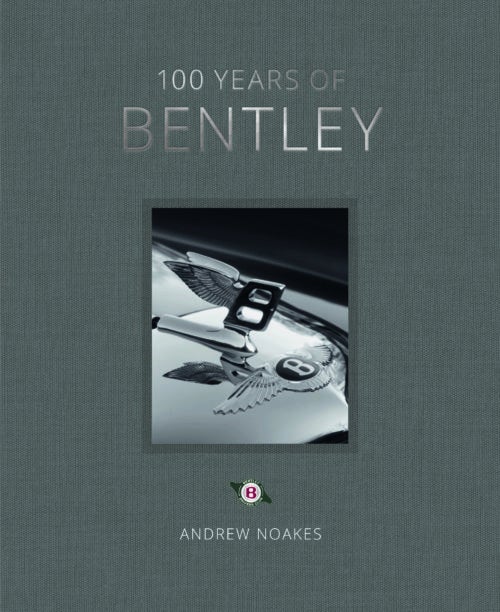 Before me sits the book 100 Years of Bentley. It’s huge, weighs a lot, costs a ton, comes in a elegant slipcover and is, overall, a wonderful experience. You know, sort of like Bentleys themselves.

Bentley, the car company, has been going great guns recently with this whole centenary celebration. As well they should, as well as any car company should that has made it for over a century.

So maybe a big overblown book is just the right thing?

It is, in fact, just the right thing.

If you are a casual Bentley fan, or even cars in general, this is probably not for you. At a retail price of $75.00, it is not cheap. But there is a lot of quality to be found here. The book sits about one foot by 18 inches, bound in a dove grey binding.

That’s just the outside, but the interior lives up to that luxurious start. With a foreword from Bentley luminaries, and chocked full of fantastic photos, you’d almost be forgiven if you skipped the words and such.

But that would be a mistake.

Building Them Better Than Anyone Else

100 Years of Bentley starts with the person behind all this: W.O. Bentley. W.O., as he liked to be called because he disliked his name Walter, is like Ettore Bugatti or Enzo Ferrari. He’s a guy that knew what he liked about cars and thought he could build them better than anyone else. I’ll leave the final decision down to you, the car buying public, but it’s hard to fault what the company has made and what they have accomplished.

To put it bluntly, Bentley got it right, right out of the blocks.

The Fastest Trucks In Europe

They had a mindset that would be familiar today as it would be to our hot-rodding predecessors. That mindset (initially) boiled down to two words: More power. Bigger engines, then blowers on those big engines and, oh yeah, bigger brakes to stop them.

Bentley was famous, back when they started in the 1920s, as being pretty much the antithesis of Bugatti. Where la Patron’s cars were lithe and refined, W.O.’s handiwork was large, upright, forthright, and honest as a tank bringing its gun to bear.

Ettore once said that “Mr. Bentley makes the fastest trucks in Europe.” People took it as a slight, but anyone who knew Bugatti knew that was a high compliment. Most of the time he wouldn’t be caught dead talking about his competitors at all.

100 Years of Bentley Covers Everything

The book comes across as anything but a fluff piece from a world-recognized brand looking for a good press tchotchke in their centenary year.In a lot of ways, glossing over the hard times, as so many corporations are want to do, would be impossible when dealing with Bentley.

See, they got it right, pretty much right out of the box. They kicked serious butt at Le Mans and consumers liked their cars, especially the right kind of consumers. The rich consumer. Then BOOM, the Great Depression hit the nascent automotive industry like a meteor beaning a bunch of reptiles.

Duesenberg, gone. Marmon, gone. Cadillac, absorbed into GM to save its bacon. Pierce-Arrow, gone. Cord, gone. Franklin, gone. Hupmobile, gone. Bentley, much to their credit, didn’t go anywhere. They were able to weather this worst of economic storms and come out the other side. Today they are producing beautiful cars like the Continental GT V8.

100 Years of Bentley also unflinchingly looks at the rather unconventional ways the car company survived. They expanded into Europe – both risky and very tutt-tuttable in Jolly Olde England. They partnered (basically merged) with Rolls Royce. They leveraged their performance heritage to be one of the first in-house hot rod divisions – “Oh no dear boy, one wants a Rolls Royce. Leave high performance to those Bentley boys.”

They survived British recessions only to be acquired by, of all people, Volkswagen. And they thrived under the new arrangement. They went back to Le Mans and won again! And, here we are, 100 years later and the “Boys from Crewe” show absolutely no signs of slowing down.

100 Years of Bentley Was a Welcome Treat

Andrew Noakes, the author, is a name I recognize, but this is the first time I have come across any of his work. He’s cranked out over 20 books so far, and if any of them are as impressive as 100 Years of Bentley, I’d sure love to have them sitting on my shelf.

100 Years of Bentley by Andrew Noakes

Andrew Noakes is an award-winning motoring writer and automotive journalism lecturer. He trained as an automotive engineer but decided to move into motoring journalism and has been writing about cars for over 20 years. He is the Chairman of the Guild of Motoring Writers and is the author of more than 20 books on cars and Motorsport, including Aston Martin DB – 70 Years (Aurum Press, 2017).